Apple cider vinegar is basically made out of fermented apples along with water and it consists of 5 percent acidity. You might have also noticed that there are different kinds of Apple cider vinegar available in the market. There are studies suggesting that apple cider vinegar is responsible for burning the extra fats in the body. Due to this reason it has become very popular among the people and has zero calories without any fat, protein, fiber or carbohydrates. Other than losing weight there are many other health benefits of Apple cider vinegar but there is a limit to everything because too much leads to some risks. So, through this article we are going to discuss the health benefits as well as risk of taking Apple Cider Vinegar.

Apple cider vinegar has a really high status in the market and it is said that there many properties that are helpful for health but few know about it. Everything has their own pros and cons, so Apple cider vinegar is no exception. 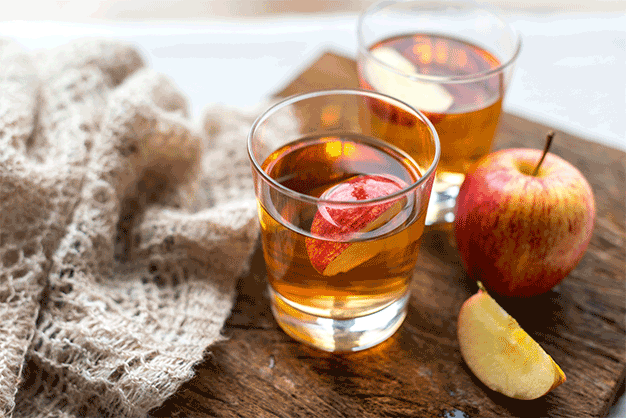 Here are the Benefits

There are many studies that have shown that apple cider vinegar has many health benefits including type 2 diabetes too. As published by the Annals of Nutrition and Metabolism, including 2 teaspoons of vinegar is helpful in reducing blood sugar levels if you include complex carbohydrates in the diet. Other studies published by the European Journal of Clinical Nutrition have shown that people who included vinegar in their diet were able to improve their insulin levels. Much of the evidence also shows that drinking water mixed with vinegar was not only able to control glucose levels but also reduce the craving of carbs as well.

It is seen that vinegar contributes to decreasing the production of acid and that is why it is recommended to have apple cider vinegar. Along with that it also reduces the symptoms related to acidity including heartburn. According to some studies published by the Journal Current Gastroenterology Reports in the year July 2019 it has been found that apple cider vinegar has a significant help in decreasing the acid reflux.

Other than weight loss Apple cider vinegar also has properties for treating any kind of infection in the body. As published in the Alternative therapies in Health and Medicine, a doctor was able to successfully treat the 32 year old female patient of chronic yeast infection with only applying it topically. It should always be applied in the supervision of a doctor as it can affect the pH balance of the vagina.

Some of the studies suggested that apple cider vinegar has helped in managing the symptoms caused by inflammatory disease like multiple sclerosis, rheumatoid arthritis as well as ankylosing spondylitis. As discussed above, Apple cider vinegar helps in gastrointestinal symptoms by improving the gut bacteria so in turn it naturally affects the inflammation.

Any patient suffering from HIV, Hepatitis C and mental health disorders has a significant effect on managing the stress. In case of HIV it helps in controlling symptoms to some levels and in Hepatitis C it controls the disease by removing toxins from the body. It is very effective in improving the overall health of the organs.

In the studies published by the Journal of Clinical and Aesthetic Dermatology in the year of 2015.

In this condition  that skin becomes very itchy and the skin always appears very scaly. Anyone suffering from it is suggested to apply it directly on the skin by diluting the vinegar in water as it effectively reduces bleeding as well as itching.

According to the studies of Annals of Dermatology published in the year December 2016 it was found in the experiment while treating mice with eczema that contains acidic creams which includes vinegar creams also. This leads to less flare up and naturally improves the function of the barrier by providing hydration to the skin.

Here are some of the Health Risk of Apple Cider Vinegar

It is seen that consuming too much vinegar can affect the levels of potassium in the blood as well as bone. A 28 year old woman who consumed apple cider vinegar for almost 6 year was reported to have low levels of potassium. She was also diagnosed with the brittle bone condition known as osteoporosis.

2. Erosion of the Enamel present in Teeth

As it is commonly known that beverages that are high in acidic are very effective in damaging the tooth enamel. As acetic acid present in the apple cider vinegar is dangerous for the tooth enamel. As vinegar has relatively high pH levels that results in 20 percent loss of the minerals present in the teeth. There was a test conducted which largely proved about vinegar affecting the enamel.

Apple cider has the potential of causing burning in the throat and is especially harmful for children. Its high acetic acid level has proven to be the cause resulting in burning as well as pain in the throat.

Apple Cider vinegar is quite useful if taken in a minimum amount as mentioned above in the article. Taking it too much can lead to many other health problems so, it is very important to consult a doctor before including it in your diet. It is also important to take apple cider vinegar in a diluted form instead of taking directly and always take the one that is healthy as well as safe.