The irregularities in cell formation, multiplication within the cell structure is defined as cancer. In the body, cells grow, divide and die in an uncontrolled fashion. This process destroys the healthy cells and gives birth to cancer cells within the body. These cells can lead to various diseases.

Cancer is Caused by Various Internal or External Stimuli

Different kinds of cancer shows various symptoms in different ways.
Cancer can be caused by various number of factors which are environmental, lifestyle, and other behavioural patterns. These factors can lead to deadly disease.

Smoking and tobacco[both] are the biggest causes of cancer. They can cause throat, oesophagus, lung, bladder, pancreatic, and respiratory tract cancer. Even those people who are indirectly exposed to cigarette smoke are at high risk. Cigarette smoke is also indirectly responsible for stomach, kidney and liver cancer. It is not exactly tobacco which causes cancer but rather the chemicals or carcinogens present in the tobacco that can lead to cancer which include nicotine, benzene, lead, carbon monoxide, ammonia etc.

These are cancer-causing substances which include physical, chemicals and biological agents. Although the presence of carcinogens is injurious, it doesn’t mean that every carcinogen may necessarily cause cancer. Other factors which also may includes amount of exposure and genetic background that have an equal influence on the development of this disease.

There are many places where people can get exposed to radiations such as X-ray machines, mines, etc. But these are not the most prominent cause of radiation based cancers. Too much exposure to uv rays from the sun can cause skin damage which can lead to skin cancer.

If not paid proper attention there are many viruses such as hepatitis B, C, human papilloma virus, Epstein-Barr virus, etc. which can leads to cancer.

Genetically modified diet that has chemical toxins in it is considered as another cancer- causing agent. A diet filled with fat, sugar, sodium etc. can trigger obesity which can result in cancer.
But according to Ayurveda, due to imbalance in the synchronisation between 3 bio energies [vata, pitta, kapha], cancer occurs.

There are several types of cancer such as :-

In men and women, symptoms of cancer differs. Some of these are clearly visible and some are hard to notice. 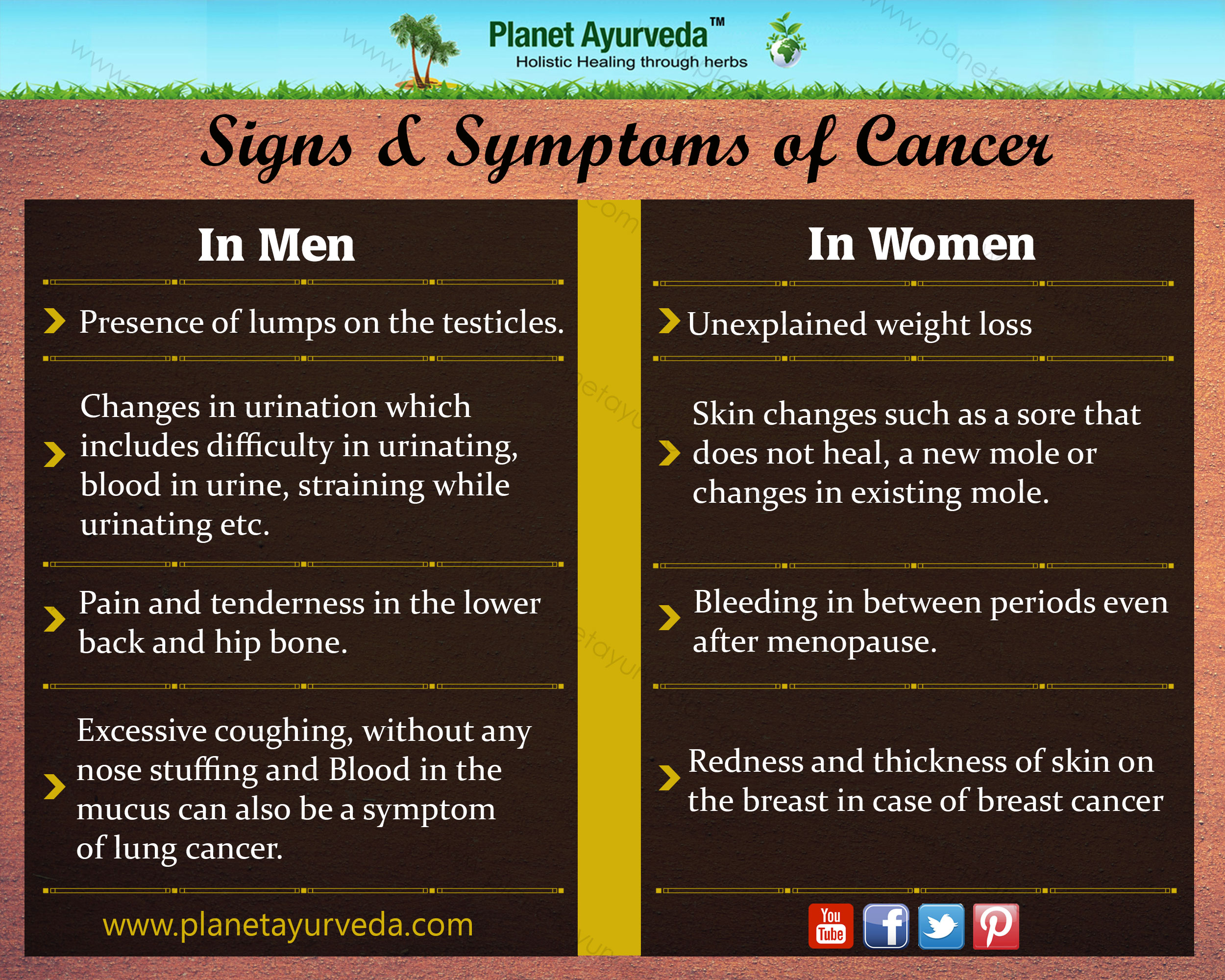 How to Diagnose Cancer ?

How to Treat Cancer ?

There are various therapies which includes radiation therapy, chemotherapy, hormonal therapy, immunotherapy and synthetic lethality. Surgical excision is also an another option in treating cancer.

There are many side effects of medicines and radiations on the body in modern science. Cancer can be treated with the ayurvedic therapy. Ayurveda provides safe and natural treatment for cancer. It enhances body functioning naturally. There are many herbs as well as home remedies in Ayurveda which help in treating cancer that control the abnormal growth of cells and in later stages it will help to reduce pain and curb and migration to other organs.

When it come to prevent cancer, this is the king of herb/spice. The powerful polyphenol Curcumin in turmeric which helps in retarding the growth of cancer cells causing breast cancer, prostate cancer, brain tumour, melanoma. without causing any harm to other healthy growing cells, Curcumin promotes apoptosis and helps in elimination of cancer breeding cells.

Dried turmeric powder whose color ranges from orange to yellow. By peeling, boiling, drying, and then grating fresh rhizomes you can make your own turmeric powder and consume fresh, uncooked turmeric to maximize its health benefits against cancer treatment as well as prevention. By combining turmeric with onion, helps in reduction of number and size of precancerous lesions.

As fennel is Armed with phyto-nutrients and antioxidants, cancer cells have to accept defeat. ‘Anethole’, a major constituent of fennel helps in resisting and restricting the invasive and adhesive activities of cancer cells. It suppresses the enzymatic regulated activities behind cancer cell multiplication. Roasted fennel with parmesan can be a star pick. Prior to an elaborate meal, a tomato-fennel soup with garlic or fresh salads with fennel bulbs. 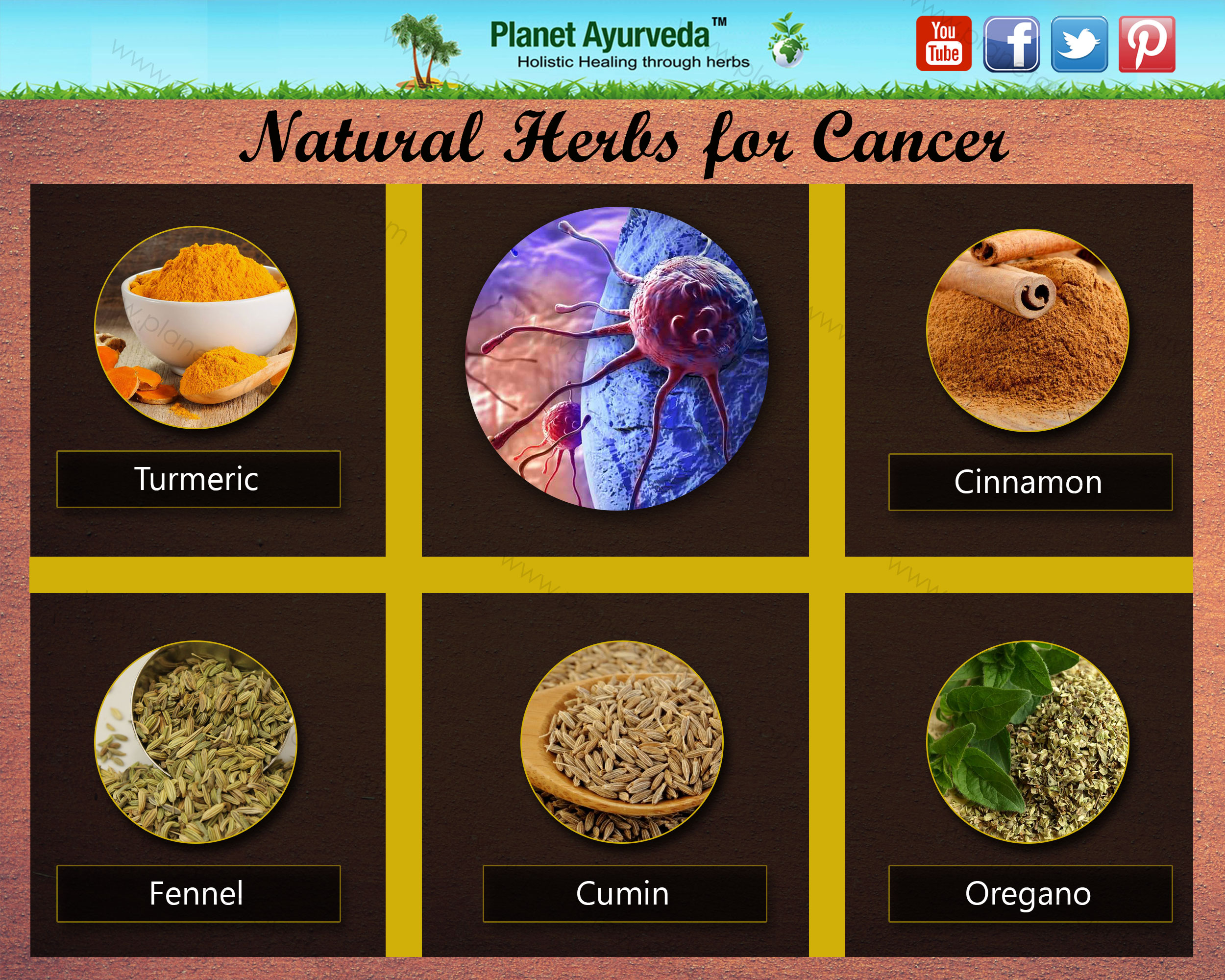 As cumin helps in digestion and probably that is the most important reason of chewing a handful of cumin seeds at the end of every meal. However, its health benefits go beyond. Cumin seeds contain a compound called ‘Thymoquinone’ that checks growth of cells responsible for prostate cancer. So, instead of loading your usual snack options with calories and oil, add cumin to your fried beans, bread or sauce and make the dish rich in flavour and high on health so as to prevent cancer and many other diseases. You can add the magic of cumin in your regular bowl of rice and tadka dal too!

A natural food preservative, cinnamon is a source of iron and calcium. Regular taking half teaspoon of cinnamon powder helps in cancer prevention. it blocks the formation of new vessels in the human body and helps in tumour formation and growth prevention. Some of the effective ways of including cinnamon in your diet which are as follows:-

Oregano is considered as a potential agent against prostate cancer. It has anti-microbial compounds, one teaspoon of oregano has the power of two cups of red grapes. Oregano consists of Phyto-chemical ‘Quercetin’ which restricts the growth of malignant cells in the body and acts like a drug against cancer centric diseases.

How to Prevent Cancer ?