Nowadays life is moving at a fast pace. People are using their bodies like a machine. Without proper maintenance thismachine develops many degenerative changes which are painful and also decrease the functional efficiency of our body, A slipped disc is also one such disease.

The intervertebral discs are tightly packed between two vertebrae and these act as protective shock absorbing pads between the bones of the spine. When a disc herniates or ruptures, it may create pressure against one or more of the spinal nerves which can cause weakness, pain or sometimes numbness in the area of the body served by those nerves. Slipped disc affects the spine in which a tear in the outer, fibrous ring (anulus fibrosus) of an intervertebral disc allows the soft, central portion to bulge out beyond the damaged outer rings.

A slipped disc is also known as a herniated disc or prolapsed disc and ruptured disc. Slipped disc is usually due to age-related degeneration of the anulus fibrosus. Other Factors that lead to slipped disc include Poor posture combined with the habitual use of incorrect body mechanics, hard physical labour ,Post-delivery in women, lifting heavy objects, especially accompanied by twisting or turning; excessive strain, and sudden forceful trauma. A herniation may develop suddenly or gradually over weeks or months.

Slipped disc can occur in any part of the spine but it is more common in the lower back especially at the L4-L5 and L5-S1 levels. It is called lumbar disc herniation. This is because the lumbar spine carries most of the body’s weight. The second most common area is neck region mainly at C6-C7 levels. It is called cervical disc herniation. The area in which you experience pain depends on what part of the spine is affected.

Degenerative disc disease deals with normal changes in your spinal discs with the progression of age. Spinal discs are soft, compressible discs that separate the vertebrae that make up the spine. The discs act as shock absorbers for the spine.I t allows spine to flex, bend, and twist. Degenerative disc disease can take place throughout the spine, but it most often occurs in the discs in the lower back (lumbar region) and the neck (cervical region).

According to Ayurveda Degenerative disc disease is vataj disorder which occurs due to dhatu kshaya. With advancement of age vata increases in body and causes many degenerative changes in the body. When vata increases it causes dryness and loss of fluid in your discs. This reduces the ability of the discs to act as shock absorbers and makes them less flexible. Loss of fluid also makes the disc thinner and narrows the distance between the vertebrae. As the space between the vertebrae gets smaller, there is less padding between them, and the spine becomes less flexible. The body reacts to this by formation of bone spurs (osteophytes). These bony growths or osteophytes are called Asthi Dhatu Vridhi due to vitiation of vata in the body. Bone spurs can put pressure on the spinal nerve roots, resulting in pain in the area of the body served by those nerves.These changes are more likely to occur in people who are having vatik prakirti, who smoke cigarettes, those who do excessive physical work and liftheavy objects in routine. People who are obese are also more likely to have symptoms of Slipped disc/ degenerative disc disease.

Symptoms of a herniated disc can vary depending on the location of the herniation and the types of soft tissue that are involved. A herniated disc can therefore produce symptoms anywhere along the course of that nerve, A slipped disc can produce different symptoms like varying degrees of pain in the back or neck along with numbness or weakness, tingling, paralysisand paresthesia.

Planet ayurveda provides disc care pack for herniated disc problem. This pack helps in relieving spasm of muscles, prevents further protrusion or herniation of disc and reduces inflammation of soft tissue if any. 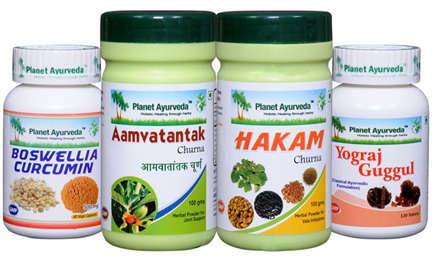 It is packed with pure herbal extracts. Boswellia Curcumin is very effective natural supplement by Planet Ayurveda. It is importantfor maintaining musculoskeletal health. It is a perfect combination of Boswellia and Curcumin.

Boswellia Serrata (salai Guggulu)  is a gum resin extracted from a tree, (Boswellia) has long been used in  Ayurveda. The boswellic acids that are a component of the resin have shown favourable results for various inflammatory conditions. Studies have shown thatboswellic acids, are most potent inhibitorof an enzyme responsible for inflammation,thus making it excellent anti-inflammatory herb for joint pains and herniated disc.

Its Second ingredient Curcumin is having best anti – inflammatory properties and is useful for osteoarthritis and Rheumatoid arthritis. It acts best in inflammatory dis orders.

Aamvatantak Churna is a blend of ingredients like Ashwagandha (Withania somnifera),Haridra (Curcuma longa), Methika (Trigonella foenumgraecum), Surnajan (Colchicum luteum), Gorakhmundi (Sphaeranthus Indicus) and Shunthi (Zingiber officinale). All these herbs act together in a synergestic manner to pacify vitiated kapha and vata ofbody and thus effectively manage joint pains These herbs are having Aama pachak action (toxin clearing action) and vata pacifying action. Gorakh mundi is a pitta pacifying herb in this preparation thus making this formulation usefulfor pitta prakirti people also. Ashwgandha is a potent nervine tonic and relaxes nervous system there fore it is useful to calm down pain along the course of the nerve and relieve pain due to slipped disc.

Yograj guggulu is 100% standardized herbalcombination according to Classical Ayurvedic texts.

There fore Hakam Churna is a unique formulation by Planet Ayurveda for Slipped disc.

Pack – It is available in pack of 100gms