Diabetes, hypertension, obesity, PCOS and arthritis are some of the lifestyle disorders which are becoming prominent day by day due to altered life patterns and lack of physical exercise. Furthermore, the increasing trend of auto-immune disease is becoming more common. These diseases are associated with formation of autoantibodies against self-body organs and tissues due to the altered or mutation in the immune cells. One of such auto-immune conditions found associated with these lifestyle disorders is antiphospholipid syndrome. In this article we are going to discuss this syndrome, its clinical manifestations, causes, diagnosis and possible complications along with the best Ayurvedic treatment of Antiphospholipid syndrome. 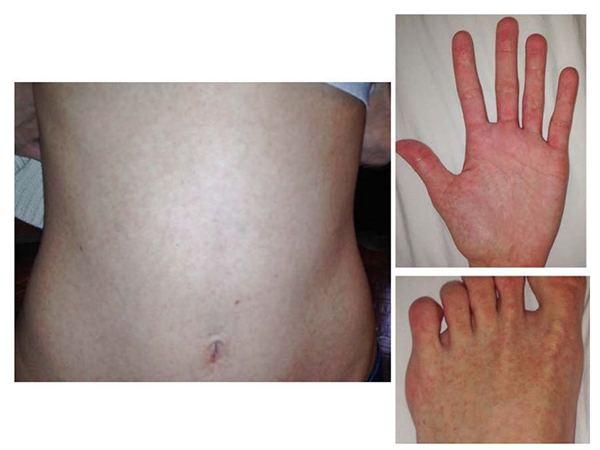 Antiphospholipid Syndrome is an autoimmune condition which can cause recurrent and frequent clotting in veins and arteries or in miscarriages. This unwanted clotting is resulted due to the presence of blood protein known as antiphospholipid antibodies which are formed against the body’s own tissue. These autoantibodies by affecting the normal clotting procedure, leading to increased thrombosis or clot formation.

The clinical features of Antiphospholipid Syndrome can include presence of deep vein thrombosis (blood clots in the legs) that lead to the pain, redness and swelling in the affected legs, and these clots can travel to the lungs & cause pulmonary embolism. Repeated stillbirths or miscarriages are found commonly associated in the affected females, along with pre-eclampsia and premature delivery like complications in pregnant women. There is an increased chance of stroke or transient ischemic attack, even in the persons who have no previous history of any sort of cardiovascular diseases. A lacy, net-like patterned red rash is also found in some individuals. Less common clinical feature involves bleeding issues due to the lack of clotting factors, these bleeding episodes can occur particularly from nose, gums, or even within the skin which appear as small red spots or patches. This syndrome can damage the valves of the heart leading to cardiovascular diseases. Further, few neurological symptoms including migraines, seizures, chronic headaches may be possible when these blood clots restrict the adequate blood supply to the particular part of the brain.

Antiphospholipid Syndrome is believed to be caused in association or due to an underlying autoimmune condition where the body’s affected immune system starts producing the antibodies, which makes the blood more likely to clot. However, in rare cases, this condition is found as idiopathic (without an underlying cause). The predominance of this syndrome in the females is more than in the men. The risk factors for this syndrome include autoimmune disorders such as Sjogren’s syndrome or lupus, infections such as HIV/AIDS, Lyme disease, and syphilis, hepatitis C etc. Antiphospholipid Syndrome is also believed to be genetically inherited and runs in families. There is more possibility of the syndrome, particularly during pregnancy, after surgery, in cigarette smokers, females taking estrogen therapy or oral contraceptive pills, and the persons having high triglycerides and serum cholesterol values.

The consequences of this syndrome depend on the organ affected and the serenity of the obstruction of blood flow to that organ. Few complications of the syndrome include brain stroke as a result of decreased blood flow to the part of the brain which can lead to the partial paralysis, loss of speech and permanent neurological damage. Kidney failure, and cardiovascular problems such as heart damage are the possible complications. Pulmonary embolism and high blood pressure in lungs can lead to severe breathing difficulties. Also, the complications in pregnancy such as recurrent miscarriages, premature deliveries and preeclampsia like disorders. In rare cases, the affected person can have repeated clotting events in a short interval leading to the gradual progressive damage in multiple organs.

In Ayurveda the chronology of this diseases can be understood as follows- Due to repeated bad dietary habits and lifestyle changes for a long term will lead in the formation of agnimandya (reduced digestive fire- the decrease in the digestive enzymes and juices required for appropriate digestion of the food). This condition will lead to the formation of saam rasa dhatu (chyle full of endotoxins- hyperlipidaemia), which lead to the formation of free radicals damaging the body’s cells and altering their functions, here in this condition they affect the immune cells, then these free radicals directly or after the influence of defective immune cell’s antibodies against self-cells will lead to the dhamani pratichaya (obstruction in the arteries/veins) by forming unwanted clots and leads to the vimargamana (dislocations) of these clots form remote location to the main vital organs of the body and creating a condition of strotorodha (atherosclerosis) there which will lead to blockage and reduce blood supply of the three vital organs of the body i.e. Hridaya (heart), Vasti (kidney) and shira (brain) and causing the manifestations of Antiphospholipid syndrome.

Planet ayurveda is the herbal manufacturing unit which is gradually emerging as a global manufacturer and distributer of herbal or herbomineral medications with strict adherence to ayurvedic texts and principles. The product made here are obtained from 100% natural sources, are processed, and formulated with the time-tested formulas, under the guidance and supervision of the expert team led by experienced ayurvedic physicians. The main organ which is at risk in Antiphospholipid Syndrome is heart and Arjuna (Terminalia arjuna) is well known for its cardioprotective actions and wellness of digestive system. Therefore, Planet Ayurveda’s Arjuna are formulated with the standardized extract of Terminalia arjuna, that not only prevents the heart by opening the collaterals during emergency situations to prevent the cardiac arrest but also improves digestion that reduces the leakage of free radicals in the blood which are main cause for damaging the immune cells and creating this and other associated auto-immune condition.

These capsules formulated by Planet Ayurveda contain the standardized extract of Gotu Kola (Mandookparni- Centella asiatica). This herb is well known for its nervine tonic actions. It helps in preventing the brain stoke and also cleansing the toxins from the nerves & blood vessels and promoting their strength. Gotu Kola Capsule also helps in reducing the stress which is also believed to trigger up the blood pressure and the capsules makes the body less prone for clot formation. Thus, helps in improving the condition of Antiphospholipid syndrome.

Dosage– One capsule two times a day with water after meals.

This single herbal formulation is made from the standardised extract of Manjishtha (Rubia cordifolia). This herb has been used for various blood related and skin disorders since ages due to its raktashodhak (blood detoxifying) abilities. It will reduce risk of formation of clots by purifying the blood. Due to its kashya guna (astringent properties) it also helps in managing the bleeding disorders related with Antiphospholipid syndrome.

Dosage– One capsule two times a day with water after meals.

Dosage– One teaspoon two times a day with lukewarm water after meals.

In Allopathic medicine, the patient with Antiphospholipid syndrome has to take a long-term anticoagulant therapy, which significantly affects the life of the persons affected with syndrome as they are prone to bleeding risks due to the effect of blood thinner medicines. Whereas in Ayurveda this syndrome is treated with natural herbal formulation which doesn’t cause such side effects to the body and efficiently helps in treating Antiphospholipid syndrome with a holistic approach of herbal medications, lifestyle and dietary modifications.