Crocodile shagreen is the opacity within the central posterior corneal stroma. The opacities are without any defining edges with clear spaces. The pattern closely resembles crocodile skin. That’s why it is termed as Crocodile Shagreen. Crocodile shagreen is a benign and degenerative condition of the cornea which is mostly asymptomatic. 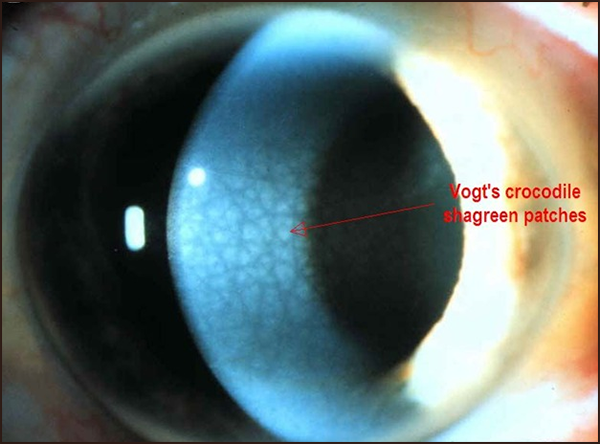 In Ayurveda, due to the resemblance in clinical pictures and manifestations we can correlate the corneal opacities with AvranaShukra as described by Achayara Shusrutha & Acharya Bhagbhatta. AvaranShukra comes under the heading of Krishan mandal rogas. Avrana Shukla means opacity without ulcer which indicates healed corneal ulcer or the senile changes that are occurring in cornea leading to the formation of such opacities.
Here, in this article we are going to discuss Crocodile Shagreen and show a better way for treating it with Ayurvedic Remedies.

Crocodile shagreen appears as bilateral, polygonal in shape, grayish-white opacities of the corneal stroma. These opacities have indefinite edges with clear spaces. This disease is usually seen in the elderly, as it is a degenerative disorder. According to Ayurveda, AvarnaShukra based on location comes in the Netra KrishangataRoga. It is a Raktaja Netra Rog i.e. caused due to vitiated blood. Acharya described it under the heading of Aushadsadhyavikaar which means this disease is treatable with medicines, no surgical intervention is required.

Causes can be any of the following:

It is usually an asymptomatic condition but in rare cases it may present with blurring of vision or night glare, etc.

Meaning of Shloka: The Shloka states that Avaranashukra (innocuous corneal opacity) looks like Shankha (Conch shell) which is white in color and featuring Kapha dosha having mild / no pain, is curable.

As described by Acharya Madhava in his book Madhava Nidana, the features of this harmless corneal opacity is that it appears like a shell / moon / white lotus or thin white clouds.

Clinically, examination with slit lamp biomicroscopy is the standard for diagnosis. Vivo confocal microscopy is started to be used recently which shows dark striae in the extracellular matrix and a mosaic pattern of the collagen lamellae. Electron microscopy shows the presence of vacuoles in corneal stroma and collagenous lamellae look like a sawtooth. These changes may lead to polygonal opacities which are seen clinically.

Following are the differential diagnosis of Crocodile shagreen :-

Good, if present without any associated progression or any kind of visual disturbances. This condition is considered curable both by Sushruta and Vagbhata. Though it is a treatable condition, Avarna Shukra is said to be located in the deep layers of cornea i.e. 2nd and 3rd layers (tunics of eye), thicker, chronic and is difficult to treat. Features given by Acharaya Bhagbhatta for the condition after which the disease becomes incurable. (Ref. Ashtaang Hridaya, Uttarsthan, 10/31)

As Crocodile Shagreen is mostly an asymptomatic condition, in those cases treatment is not that much required. But if the symptoms begin to appear and the signs persist, following are the considerable Ayurvedic treatment principles as described by Acharyas for Avarnashukra.

The above shloka describes the line of management of AvarnaShukra as quoted by Acharya Vagbhata. (Ref- Ashtaang Hridaya, Uttarsthan, 11/29)

Meaning of Shloka: Triphala can be used in wet or dried form according to doshas, in Shukar Roga. Use of tikatghrit, use of Jaloka etc. (leech therapy) for blood-letting, Virechan (detoxification method of the whole body), Aaschyotan, trepan and putpaak etc. (Ayurvedic Panchakarma procedures beneficial for eyes) can be done.

Planet Ayurveda is a leading manufacturing unit that makes herbal / herbo-mineral products with the adherence of Ayurvedic texts as well as experts’ guidance. All the medicines here are made from natural sources with ancient time-tested formulas. The herbal medicines as suggested by our experts for Crocodile shagreen are:

It is single herb capsules’ formulation which has the extract of Vaccinium Myrtillus containing flavonoids, anthocyanin pigments, and other naturally occurring antioxidants that are very much beneficial for the eyes. Vaccinium Myrtillus (bilberries) is the main source of this medicine.

Dosage: 1-2 capsules once or twice a day after meals with plain water.

Angel eye vitale is an herbal formulation that contains grape seed oil, almond oil and vitamin rich ingredients .This formulation gives great results for the patients of eye defects. All these elements give proper nutrition to eyes.

It is a capsule formulation made by the mixture of many herbal ingredients. As this disease involves the Pitta Dosha, so the drug helps to balance the vitiation of Pitta. Ingredients include Praval pishti (Coral compound), Akik pishti (Agate compound), Jawahar Mohra Pishti, Kamdudha Ras, Mukta Pishti (Pearl compound) and Giloy Satva (Tinospora cordifolia).

Dosage: 1 capsule once or twice a day after meals with plain water.

It is a classical natural product made from minerals, available in tablet form. It is a dietary supplement that is prepared using Swarna Bhasma, Rajata Bhasma, Abhraka Bhasma and various other minerals in powdered and purified form. It helps to maintain a healthy nervous system. By improving the nervous system, it plays a key role in keeping the eyes healthy as well.

Dosage: 1-2 tablets twice a day with lukewarm water after the meals.

It is a poly herbal classical preparation in avleha form, which is very much beneficial for the brain and eyes. It helps in maintaining balance of the doshas (body energies), the dhatus (body tissues) and the malas (body waste). Its ingredients include Brahmi (Bacopa Monnieri), Dashmoola, bala (Sida Cordifolia), Ashwagandha (Withania somnifera), Bhumi Amla (Phyllanthus Niruri), etc.

It is also a classical polyherbo-mineral compound which contains loh bhasma (ash of iron) along with triphala, which are very effective for healthy eyes. Avarna shukra as we know is a raktaj disorder so these ingredients aid in maintaining the vitiated rakta dosha, and ultimately supports in treating Crocodile Shagreen. Other ingredients include Haritaki (Terminalia chebula), Bibhitaki (Terminalia bellerica), Amalaki (Emblica officinalis) along with Yastimadhu (Glycyrrhiza Glabra) and Loh Bhasma (detoxified ash of iron).

Dosage: 2 to 3 tablets twice a day with Honey or Ghee, after meals.

It is a poly herbal classical preparation in ghrita form. This medicine has ghee as its base. According to Ayurveda, this ghrita is used for snehana karma (internal oilation therapy) which is very much beneficial for all the Netra rogas. It can be used for various netravasti and netratarpan. Here, in this disease we will use it for vata kapha Ghana properties and for snehan to get better results.

Dosage
o For internal use: 1 teaspoon with lukewarm water or with food (as suits the patient).
o For external use: Quantity sufficient or as directed by the physician.

It is the single drug formulation available in capsule form and is an effective medicine for many ailments. It is basically the standardized extract of Turmeric (Curcuma longa 95%). It exhibits a wide range of pharmacological properties such as, antioxidant, anti-inflammatory, antimutagenic, and antimicrobial. Curcumin belongs to a group of natural antioxidants. It exists in the form of strong antioxidant agents, vitamin C and E. The effect of curcumin on free radicals is carried out by several different mechanisms. It may also scavenge various forms of free radicals, such as ROS and reactive nitrogen species. (Refrence for Curcumin – https://www.ncbi.nlm.nih.gov/)

Dosage – 2 capsules twice a day with plain water, after meals.

For a better life it is necessary to keep our eyes healthy and free from any ailment. So, take the top most care of your eyes. As, in early stages the disease seems to be asymptomatic it is not necessary that it can’t proceed further to any complication. To avoid such conditions, one must be concerned in the early stages. Therefore, as explained above with Ayurveda and herbal products, there is a great scope of preventing and treating eye related disorders including Crocodile Shagreen.

« Ayurvedic Treatment of SCLC with Home Remedies
Ayurvedic Remedies for Liver Failure? How are These Better to the General Medicines? »