For the pet lover in you, do take time out to read this to know, what happens when you don’t care for them?

Rocky mountain spotted disease might sound a little too fancy to interpret, but this is yet another tick borne disease just like Lyme disease or Ehrliosisis, transmitted through your pets, especially your dogs. This disease is not affected to the dogs that host them, but the humans who get bitten by the ticks fall prey to this bacterial infection. The organism that transmits the disease is termed Rickettsia rickettsii. Although the malady was first discovered in the rocky mountains, it is now very prevalent in the western parts of the United States and yet to transmit across the continents during the spring and winter season as its peak time for propagation.

Although many people get infected within the first week of exposure from the bacteria, the signs and symptoms don’t appear until a week or two or nearly 14-15 days. The most primitive signs and symptoms of RMSD include fever and headache with mild rash in the body, fortunately the disease responds well to antibiotics so it can be considered a much safer disease. As the symptoms of this disease mimic the manifestations of other maladies it can prove a little difficult for proper diagnosis. Often the patient may be seen to be associated with nausea, vomiting, muscle weakness, concussions and  other neurological changes.
As the name suggests, a spotted nature, the Red, non itchy, inflamed, spreading rash is the most distinctive feature of this disease which generally appears within 4 or 5 days after the outburst of the initial symptoms. A few cases have also shown the manifestation of the disease without this rash, making it difficult to diagnose. Inflammation penetrating other deeper organs including the brain and heart is understood as the most common compilation of this disease. Antibiotic treatment including injections and oral supplements are used to tackle the disease in clinics while prevention is the best method to be adopted at home. While spending time outdoors, especially with your pets, try to keep yourself protected by adopting well-covered clothes and using tick repellents, most importantly keep yourself and your dogs away from the mighty action of ticks. 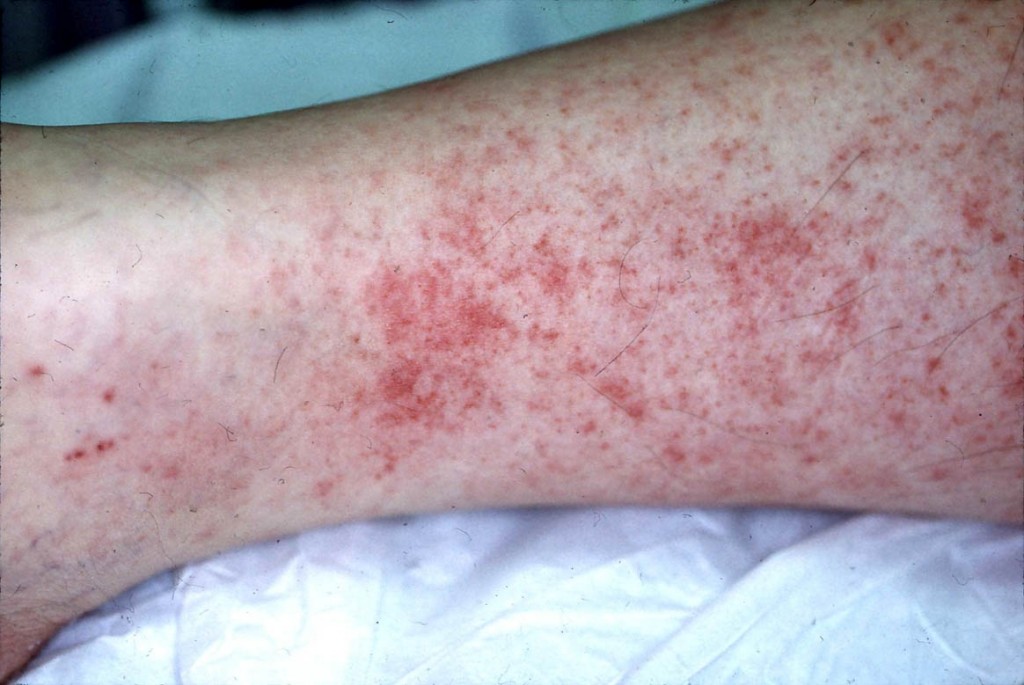 The generations-old mystic science of life, ayurveda, has explained all possible diseases in the form of fluctuations in the bodily biogenesis. The exact correlation to modern disease might not be available, but they are tackled with their similarities in Dosha propagations. As this snag shows a rash as its primitive feature, it may be understood as a compilation of aggravated Pitta entity, and treatment to neutralize the same is initiated. The treatment protocol including the detox to follow and the medications to be used, all depend on the condition and health status of an individual and we can not draw a specific pattern for the same.
Considering the predominance of the Pitta entity in this snag, Virechana or stipulated purgation therapy is adopted among the five purification theories to curb the spread of this disease. Oliation, swedation are among other compulsory therapies used initially to improve the quality of the patient before administering any of the detox therapies followed by the right medicinal approach.

PLANET AYURVEDA FOR  YOUR SUPPORT

Planet-ayurveda has come with effective organic formulations that help you to tackle the disease in the most primitive stage by using the goodness of mother nature combined with Ayurveda.

This single drug formulation created with Tinospora cordifolia, often called Amrita in Sanskrit for its potential to  normalise all three hours of the body. It is the best medicine that helps to reduce the aggravation of Vata entity while having antipyretic, anti inflammatory and antioxidant capacities.
Dosage- It is advised to consume 1 capsule twice daily or as recommended by your ayurvedic physician.

The roots of 10 drugs that have Tridosha hara property or the ability to optimise the all the probable fluctuations in any or all entities is called Dashamula. This consumer effient product not only has the same goodness as the authentic fromlation butaslo has added anti inflammatory abilities.
Dosage- It is recommended to consume 1 capsule twice daily after food or as directed by your ayurvedic physician.

This multi-drug formulation with Vidanga or Embelia ribes being the chief component is the best formulation that helps to destroy the progessuve action of invading organisms and their manifestations. Moreover the ingredients available in this formulation helps to reduce the surge of Pitta dosha and normises the body constituents.
Dosage- It is recommended to  consume 1 capsule twice daily after meals or as directed by your ayurvedic physician.

This combination with two mystic drugs Boswellia serreta and Curcuma longa are two Krimighna drugs or those which  help to expel pathogens from the body while offering to enhance the immunity. These, while alleviating the Pitta entity, also calms the body and helps to enhance the total improvement of body tissues.
Dosage-It is advised to consume 1 capsule twice daily after meals or as recommended by your ayurvedic physicians for better results.

the root of Rubia cordifolia is the main constituent in this multidrug formulation, one of the most valuable herbs in Ayurveda. While it’s hot potency calms the Vata and Kapha entities the astringent flavour alleviates the Pitta entity with added ability to induce anti inflammatory and antibacterial properties.
Dosage- It is advised to consume 2 capsules twice daily after meals or as directed by your ayurvedic physician.

While it is most important to keep your pets away from ticks being the major reason for the formation of this disease, it is even more vital to maintain the quality of our immunity at its maximum. By following the daily routine and seasonal regimens mentioned in ayurvedic classics and adopting the diary regulations with lifestyle modifications, the immunity can be well managed along with the right supplements. It is still not too late to choose ayurveda for the betterment of your life.