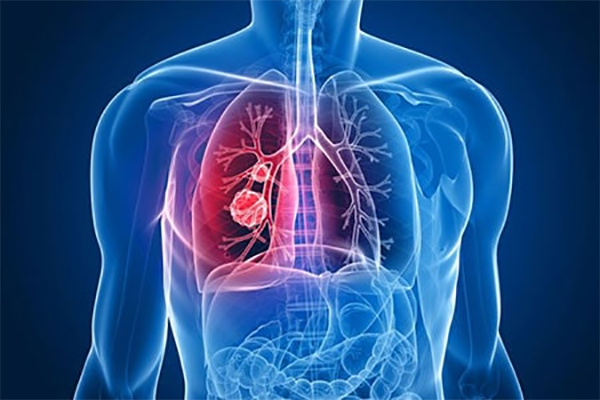 Lung cancer is more common in old people than adults. It is rare in people under age 45. Cigarette smoking is one of the leading causes of lung cancer. Mostly passive smoking increases the risk of small cell lung cancer. Other risk factors include exposure to cancer causing chemicals such as uranium, beryllium, nickel chromates, chloromethyl ethers, vinyl chloride, mustard gas, coal products, gasoline and diesel exhaust, high levels of air pollution, and radiation therapy to the lungs, etc.

Symptoms of SCLC in early stages include chest pain, cough, fatigue, loss of appetite, difficulty in breathing, wheezing, and loss of weight.

Ayurvedic Aspect of Small Cell Lung Cancer and its Management

Ayurveda is an ancient Indian medical science. In Ayurveda, Small Cell Lung Cancer may be correlated with Tridosha Dushti, mainly Kapha & vata Dushti (Vitiation of Tridosha mostly with vata & kapha dosha predominance). Small cell lung cancer is highly malignant cancer and Ayurveda defines these types of changes as Granthi or Arbuda or Vidradhi, all develop from Shotha. Shotha is a general term given to all kinds of inflammations. Shotha is of three varieties vata, pitta and kapha on the basis of the vitiated dosha involved. Tridosha vitiations in SCLC interacting with each other may result in proliferation of lung cells. Continuous increase of Vata Dosha is the biggest cause for malignancy in lungs and its Chirkaritva Guna is the cause of chronicity of lung cancer.

Tumor microenvironment allows lung cells to become malignant and as per Ayurveda these microenvironments can be directly related with Strotasa. Let’s discuss about these Strotasas in brief:

with breathing) in kapha sthanam (seat of kapha) is affected in SCLC. In SCLC, these channels of Pranvaha Strotas display in indefinable shape and the function of lungs get affected which leads to various symptoms in the body.
Thus, in SCLC, air is one of the main causative factors therefore Pranavaha Strodushti is the key to treat in SCLC.

As per Acharya Charka, the basic seats of Pranavaha Strotas are Hridaya (heart) and Mahastrotasa (Gastrointestinal tract/ respiratory tract). And as per Acharya Sushruta Hridaya and Rasvahi Dhamani (lymphatic vessels). The transformation of Vayu (air) from outside atmosphere into its bodily acceptable form is also a process which takes place in Mahastrotasa and this Mahastrotasa which is the mul sthana (basic seat) of Pranava Strotasa mainly gets affected in SCLC. As per Pranvaha Strotodushti, there is a Sanga of Prana Vayu (contamination of inhaled air by combination with vitiated doshas) that may cause breathing difficulty, coughing, swallowing difficulty etc. Also, Vimarggamana of dosha (movement of dosha from one place to other within the body) cause various symptoms in other parts of the body, Ati Pravritti (increased number of vitiated) of dosha, dhatu (body tissues), malas (excretory products) in SCLC may cause excessive wheezing and coughing, quickly weight loss etc. And formation of Arbuda (tumor) or Granthi (cyst like swelling) in lungs is the part of Siragranthi (type of micro channeled environment vitiation) which is defined as Kutilibhavatwam (process of calcification) in Pranavaha Strotodushti.

Formation of Phuphphusarbuda (Lung cancer) starts with taking various Apathykarak Hetu Sevana (consumption of causative factors) which includes the diet & lifestyle responsible in vitiating Tridosha (Tridosha Prakopak Aahar-Vihara) that directly affect on Dhatvagni (the fire such as epithelial cadherin inside body, responsible for checking the formation & proper functioning of body tissues), decreasing Dhatvagni will increase tissue growth in lungs of human body and it leads to SCLC. Aggravation of Vata Dosha will suppress the Kapha Dosha and after interaction between these Dosha, Dhatvagni decreases and there is a formation of cancerous growth in lungs.

Agni and Dosha stay in every cell of the human body. In SCLC, there is a continuous interaction of tridosha that may cause decrease in Dhatvagni and increase of abnormal cell formation in lungs. Since, the carcinogenic formation starts, it takes a long time to become malignant and As Acharya Sushruta quoted in Sutra sthana topic no. 21 Vranprashnadhyay,

There are Shadkriyakala which take prolonged time duration for formation of Phuphphusarbuda (Lung cancer). Therefore, the person with mild symptoms in SCLC can treat easily at Sthansanshraya level that is poorvrupa of Arbuda (prodromal stage of tumor). After that disease goes Balvattara (strong) and it’s hard to treat.

Ayurveda believes in maintaining a healthy digestive system and regular bowel habit that removes all toxins from the body and makes cells rejuvenate that includes Brahma Muhurta Uttishtha (waking up in Bramha muhurut i.e. approximately 45 min. before sunrise). It will keep the person away from abnormal cell generation and extra tissue growth in the body. Ancient medicine will keep the body healthy and maintain Strotasa (micro channeled environment) in normal condition, So that the metabolic waste will transfer easily and all cells get nourished. Following Dincharya krama (daily regimen) by Ayurveda will keep the body healthy and prevent from many deadliest diseases like lung cancer. Breaking of Samprapti (pathogenesis) is the major line of treatment in SCLC. Avoid Hetu Sevana (consumption of causative factors) and follow Pathykar Aahar and Vihar (Suitable diet & lifestyle modifications) to prevent formation of SCLC. Some Ayurvedic herbs are very useful to increase Dhatvagni and suppression of Dosha prakopa (vitiation of dosha).

Planet Ayurveda is a manufacturing hub that manufacture various herbal & mineral preparations that are 100% natural in origin. These products are made by the faculty of our expert vaidyas and are strictly based on ayurvedic formulations. 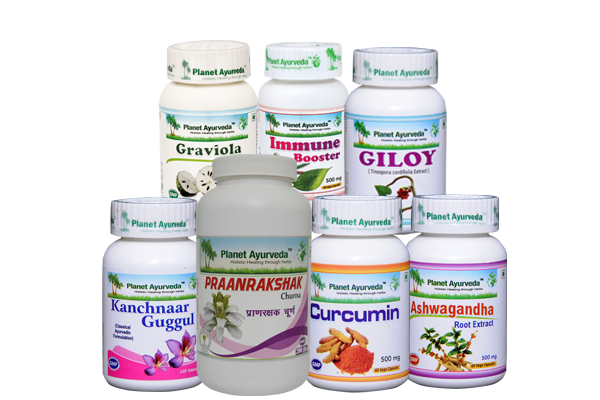 Kanchnaar Guggul is a classical formulation that is available in tablet form from Planet Ayurveda. This poly herbal preparation mainly works on kapha Dosha. The ingredients include Kanchnaar (Bauhinia variegata), triphala i.e. haritaki (Terminalia chebula), bibhitaki (Terminalia bellerica) and amlaki (Emblica officinalis), which aids in detoxification of the cells and trikatu i.e., Sonth (Zingiber officinales), Maricha (Piper nigrum) and Pippali (Piper longum) that helps in improving the Agni (digestive fire) and the last ingredient is Varun (Crataeva religiosa) which acts as a diuretic thus, helps in reducing the swelling. So, it is useful in Kapha Pradhan Symptoms of Small cell lung cancer.

Dosage: 2 Tablets twice a day with plain water, after the meals.

Dosage: 2 tsp thrice a day with plain water, after the meals.

Haridra (Curcuma longa) is an antioxidant drug as well as it improves the immune system, hence it is useful to prevent cancerous symptoms in the body. The standardized extract of Curcumin is obtained & is formulated in capsule form.

Dosage: 2 Capsules twice a day with plain water, after the meals.

Giloy capsule is the standardized extract obtained from Tinospora cordifolia. Guduchi has anti-neoplastic tendencies and is an excellent blood purifier. It helps to reduce extra cell growth, thus is effective to be used in SCLC.

Dosage: 2 Capsules two times a day with plain water, after the meals.

It is a poly-herbal formulation available in capsule form. Ingredients of immune booster contain Grape seeds, Amalaki (Emblica officinalis), bhumi amalaki (Phyllanthus niruri), etc. These help to boost immunity and reduce the chances of cancerous growth in the human body.

Dosage: 2 Capsules twice a day with plain water, after the meals.

Ashwagandha capsule is a single herbal formulation which contains the extract of Withania somnifera. Ashwagandha has withanolides constituent which acts as anticancer. Also, Ashwagandha is well known for its immune enhancing and health promoting benefits.

Graviola is an herbal drug that is made up of extract of single herb that is Annona muricata. Some specific bioactive components in Graviola are anticancer in nature. Graviola has anti-inflammatory as well as antimicrobial property. Thus, it is an efficacious herb to be used in the treatment of SCLC.

Dosage: 1 Capsule twice a day with plain water, after the meals.

Here, in this article the whole detail about SCLC is discussed clearly in both modern & Ayurvedic aspects. Thus, despite adopting harmful exposure to radiation and chemotherapy, it is better to let the body heal itself in a natural way with the support of Ayurvedic drugs and diet/lifestyle modifications. Avail more details and consult with our Ayurveda Experts by visiting www.planetayurveda.com.