Treatment of Hydrocephalus With Herbal Remedies

Hydrocephalus is a condition in which fluid buildup is noticed in the cavities of the brain that are called ventricles. These ventricles are seated deep within the brain and due to accumulation of fluid (cerebrospinal fluid) the ventricles increase and put pressure on the brain. Cerebrospinal fluid normally flows in through the ventricles and bathes the brain and the spinal cord. But if this fluid is accumulated in the brain ventricles it puts too much pressure on brain tissue and hence causes damage. This damage of tissues can result in imparied brain functions and the impairment depends on the level of tissue damage. In this article we will discuss the hydrocephalus in detail, mentioning its causes, symptoms, types and ayurvedic treatment.

The term hydrocephalus is derived from the greek word ‘hydro’ which means water and ‘cephalus’ that means head. The water here refers to the presence of cerebrospinal fluid. The accumulation of CSF in the ventricles results in increased intracranial pressure inside the skull and also causes progressive enlargement of head, convulsions, tunnel visions and mental disability. Hydrocephalus can happen at any age but usually it occurs more frequently in infants and adults around 60 years and above. 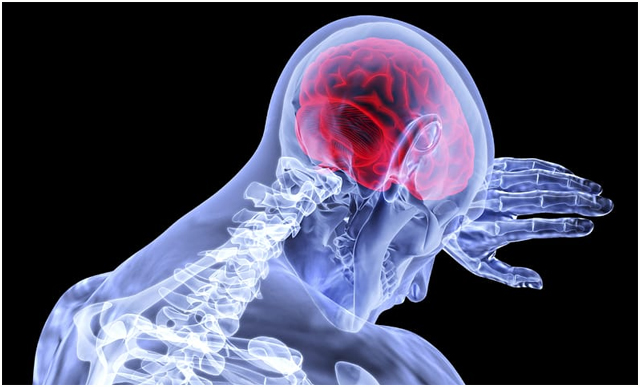 The causes of hydrocephalus vary with age like in infants it is generally the result of injury to the head before or during birth, congenital defects, tumors of the central nervous system and infections before birth that affects CNS. On the other hand, in older patients (in older children and adults) it is generally the result of developmental defects, tumors of the brain or spinal cord, bleeding in the brain and injury to the brain.

This type is also called as non-obstructive hydrocephalus. In communicating hydrocephalus the flow of cerebrospinal fluid is blocked after it exits the ventricles. In this form CSF can still flow between ventricles that remain open.

Non communicating hydrocephalus is also known as obstructive hydrocephalus and this generally occurs when the flow of cerebrospinal fluid is blocked. The blockage is generally seen in one or more narrow passages connecting the ventricles.

This type typically affects people ages around 60 years. It can be the result of any injury or even stroke. Normal pressure hydrocephalus generally develops gradually, blocking the CSF drainage. It causes fluid buildup with time. After this the enlarged ventricles press the brain around the skull and thus causes symptoms. The NPH includes dementia, walking difficulties, slurred speech which are similar to Alzheimer’s and Parkinson’s disease making the diagnosis difficult. In most of the cases normal pressure hydrocephalus remains undetermined. Bleeding in the brain due to stroke, injury, tumor and infections like meningitis are its main causes. Such patients usually develop urgency and incontinence, walking difficulties, altered gait, cognitive challenges as the early symptoms of NPH.

In Ayurveda, hydrocephalus is correlated with upshershak. In ashtanga hridaya uttaratantra upshershak is understood as a condition in children. The cause of upshershak is believed to be vata prakopa in garbha (before birth). This vitiated vata gets its root in kapala and then it produces swelling similar to the colour of skin and remains painless. (A.H.Ut. 23/21)

In modern medicine, the commonest method of Treatment of Hydrocephalusis surgical insertion of drainage systems called shunts. Another surgical procedure is also done known as endoscopic third ventriculostomy.Ayurveda explains that generally the upshershak reduces on its own. If it does not resolve then applying lepa made up of jaw, gehu, moong and ghrita is very beneficial. Rakta visravan is also done again and again, sudation with dashamoola kwatha is done.

For the management of hydrocephalus planet ayurveda also offers some of its herbal products. These products are made from the standardized extract of herbs and helps in pacifying vata and initiates the absorption of accumulated CSF. 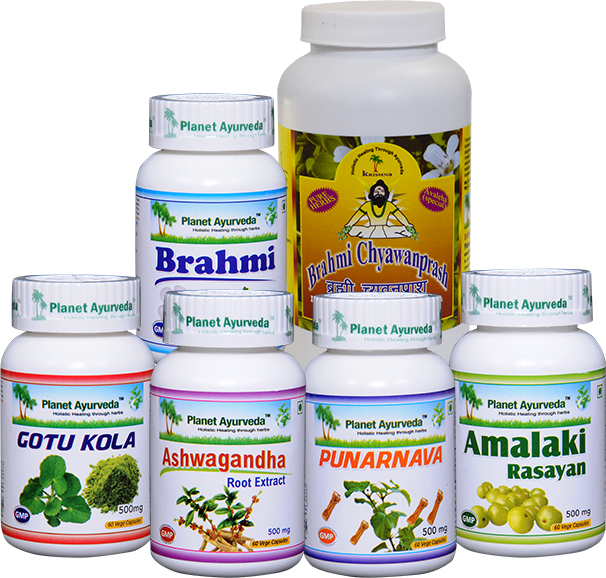 Brahmi (Bacopa monnieri) is known for its wonderful results in brain malfunction which is the result of many conditions. Brahmi is known to increase the memory power and boost brain functioning. It also helps in nourishing the damaged brain cells.

These Capsules are made from the extract of gotu kola (Centella asiatica). The parts used for the preparation are the leaves of gotu kola. This herb is very beneficial in improving circulation, improves alertness and provides relaxation.

This herb is known to reduce nervous breakdown due to hydrocephalus. It nourishes the brain tissue and provides effective results in pacifying vata. Ashwagandha (Withania somnifera) also helps in increasing the body’s immunity and thus reducing the hydrocephalus caused due to brain infection.

In Punarnava (Boerhavia diffusa), punar means again and nava means new. The herb is known to rejuvenate the cells and thus limiting the damage caused due to accumulation of CSF. It also helps in the absorption of CSF and thus relieves the symptoms. It also helps in stabilizing urinary incontinence or urgency.

Amalaki (Emblica officinalis) rasayan work by decreasing the intracranial pressure that builds inside the skull due to the accumulation of CSF. It enhances your immunity and fights with the infections.

This formulation contains Brahmi (Bacopa monnieri), punarnava (Boerhavia diffusa), Ashwagandha (Withania somnifera) , vasaka (Adhatoda vasica) and many more. This is very beneficial in reducing symptoms related to memory, walking and altered gait. The use of this product on a daily basis is very helpful in balancing tridoshas, nourishing the body and strengthening immunity.

Hydrocephalus occurs generally in children but now is commonly seen in the adults too. Such conditions are capable of causing great damage to the brain and its tissues thus producing a variety of symptoms. The formulations offered by planet ayurveda are potential of resolving the symptoms and managing this condition very efficiently. The products offered by planet ayurveda are totally herbal and do not cause any side effects. The products are internationally certified and do not contain any kind of fillers, dyes, adulterants etc. In case of any query kindly visit www.PlanetAyurveda.com