Humans stand tall as the only species that have a brain – a brain that absorbs and stores information faster than any other species. Human beings are also social creatures that are subjected to day to day, stressful exposure that involves a great deal of emotions which are wired to our brain. Our brain hence can take accumulated information from generations before us, distill it and pass it on which requires a great deal of mental energy. Since our brain is orchestrating distinctly for each specific function our body performs, chances are high even for a small nerve or any neurotransmitter to give up completely. Times have been stressful nowadays, Corona has transformed our lives into a monotonous ordeal, demanding each and every inch of our mental space. Hence, it’s already high time to destigmatize mental health and to talk about it more, Provide the ill with a healing space they always deserved. 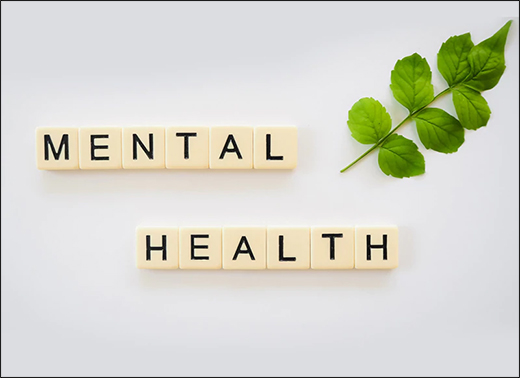 How mental health emerged as a well discussed topic

Due to the overwhelming stress, an overexerting lifestyle and erratic eating habits taxes on our brain, slowly our mental health begins to deteriorate and we find it unable to perform well even daily simple activities varying with the disorder. All thanks to social media, we’ve been well fed on mental health and are slowly shedding light on various mental disorders that are deemed common nowadays, such as anxiety and depression. But the science of ayurveda that dates back to 5000 years ago has scaled both physical and psychic disorders the same!

Imagine being bombarded with voices from invisible forces, and stripped of your ability to understand what is real and what is not. You discover you cannot trust your senses, your mind plays tricks on you and your family and friends seem like a conspiracy to harm you. That’s what living with schizophrenia is like, that which comes under the diseases that are constantly demonized by society! We can define schizophrenia as a faulty interpretation of the reality by the mind along with hallucinations, delusions and exceptionally dissociated thoughts that can be disabling as well or may tend to blight the daily functioning.

Hence it is instrumental to be aware of the types along with signs and symptoms it exhibits.As per latest contemporary studies. Schizophrenia instead of it being divided into types has been recognized as a whole spectrum with symptoms varying. Often, schizophrenia is associated as a split or multiple personality disorder, however, such notions including demonizing the same need to be debunked high time.

This is to an extent how living with schizophrenia is like seeing or hearing things that don’t actually exist, trouble communicating with others, appearing numb on the outside, lack of motivation, having delusions (false beliefs not based in reality), moving in a useless or excessive way, feeling cut off from society, withdrawal from friends and family, trouble sleeping, being unable to feel pleasure, losing interest in activities that you once enjoyed, voices talking to you, lack of social awareness etc.

What allopathy offers for schizophrenia

Schizophrenia is a chronic mental disorder that demands a lifetime treatment including psychotherapy, medications prescribed are antipsychotic medications that help regulate the dopamine levels. Since these pose greater side effects, patients are seen to be hesitant in taking them.

Ayurveda is the very science that encompasses psychiatry in the very definition of itself. Acharyas have given equal importance to both psyche and physical Health. Ayurveda characterizes well being as an equilibrium of energy standards (Doshas) and a lovely state of mind. It is comprehensive and recognizes the brain body-soul association.

As per Ayurveda, an individual is said to be swasthya (healthy) only if he/she has a clear mind and a disease-free body, i.e. an equilibrium of both mental and physical components deliver good health. The factors that deal with the mind according to Ayurveda is the triguna’s – satva rajo tamo and it’s in the vitiate of these trigunas, there is an impairment of mental health and a tallied three results in normal mental health!

Wary of the medicines and the side effects of the allopathy medications, you might be wondering at the options any alternative medicine dispenses! Fret not, you’ve found the right place. Planet ayurveda makes your healing journey easier and hassle free with the medicaments obtained directly from nature and formulations that are preached in classic ayurvedic texts, hence you may terminate your hunt for a perfect companion for your health !Planet ayurveda makes available for you a wide range of medicines and supplements and even provides an exclusive care range pack with regard to each condition your body and health has been subjected to, rightly formulated by an MD ayurvedic physician. You may also end your dilemma of finding quality ayurvedic products as these products undergo stringent quality measure tests to ensure your safety, are 100 percent vegan and are preservatives free! You may also head to planet Ayurveda for any consultations related to your health and you’ll find yourself walking out with a sound mind and a sound body!

The range of medicines planet ayurveda offers for schizophrenia include:

This is a tablet of metallo-herbo mineral compounds specially exercised for psychiatric disorders, that stabilizes vata and kapha. The ingredients are metal sourced including purified mercury otherwise known as parada that possesses antioxidant, antipyretic values and aids in enhancing the nerve to nerve coordination. Sulphur on the hand is proven useful in vata related disorders which is said to drive our nervous system. These ingredients working in a combination result in a good nervine response clearing any blockages between nerves and vessels. However it should not be consumed without a doctor’s prescription concerning its potency.

The polyherbal syrup formulation from the house of planet ayurveda incorporates the therapeutic richness of 11 herbs including the versatile Brahmi(Bacopa Monnieri),Mandukaparni(centella asiatica) Ashwagandha( Withania somnifera) etc. This helps in nourishing the satwa (essence) of your body and aids in calming the nerves, developing memory and is a great stress reliever greatly attributed to its vata relieving power!

A polyherbal nervine decoction exploiting the active principles especially saponins to which its pharmacological actions may be attributed -of brahmi (Bacopa monnieri), and other well known herbs such as shatavari (Asparagus racemosus), Haritaki (Terminalia chebula) etc and other herbs which together acts a wondrous CNS pacifier. The same ingredients also help in maintaining a neat digestion and therefore relieves you of gut disorders as well.

Dosage: 2 teaspoons to be consumed with equal amounts of water.

This herbal ghee formulation comprises effective and prosperous herbs such as vishala, Bhadra ela, nata etc and is widely prescribed for managing any psychotic disorder justifying the classic herbs that comprises it along with ghee that enhances the nervine- medicinal properties of them.

This single herb capsule formulation of Ashwagandhaa exploits the well-known herb, Withania somnifera rightly termed pearl of incredible value and its adaptogenic (resilience to stress) holds a significant value in most of the ayurvedic formulation concerning mental health but usually employed both for physical and mental health, is well known as an ayurvedic rejuvenator and works wondrously without any age or sex bias!

Brahmi capsules is a single herb formulation- One of the most established and most remarkable brain tonic utilized in ayurvedic framework from old times is Brahmi, as mentioned previously may be attributed to its active ingredients including saponins which enhance the nerve impulse transmission. Miraculously, the leaf of the brahmi resembles the cerebellum and certainly this herb is best utilized in psyche-related disorders that enhances functioning of the CNS.

CONTACT MY ASSISTANT TO PROVIDE YOU THE COSTING / ORDERING AND DELIVERY INFORMATION AT – COSTING.PLANETAYURVEDA@GMAIL.COM OR CALL AT +91-172-5214040 OR CHECK WEBSITE – WWW.PLANETAYURVEDA.COM

Getting a proper Psychotic diagnosis is harder than most people realize. Psychotic conditions are complicated, and there is unfortunately a lack of acceptance from the people around! Mentally affected individuals have demons to fight. Planet Ayurveda doesn’t leave them alone on the battlefield. We understand that you are not meant to do any of this alone. Healing begins inside and is made easier with support and love of people around you along with Planet ayurveda!

This is a kind of disorder that develops slowly and the individual at initial stage do not recognize that they are suffering from this problem but in certain cases this problem can develop quickly. It is a mental disorder that is characterized by delusions, hallucinations and some other cognitive difficulties. This problem is considered as a mental illness that can also be the result of today’s monotonous life in which people keep working like machines with a lot of stress of work on their mind which can affect their behaviors and the way they think.

Let’s discuss the symptoms of schizophrenia 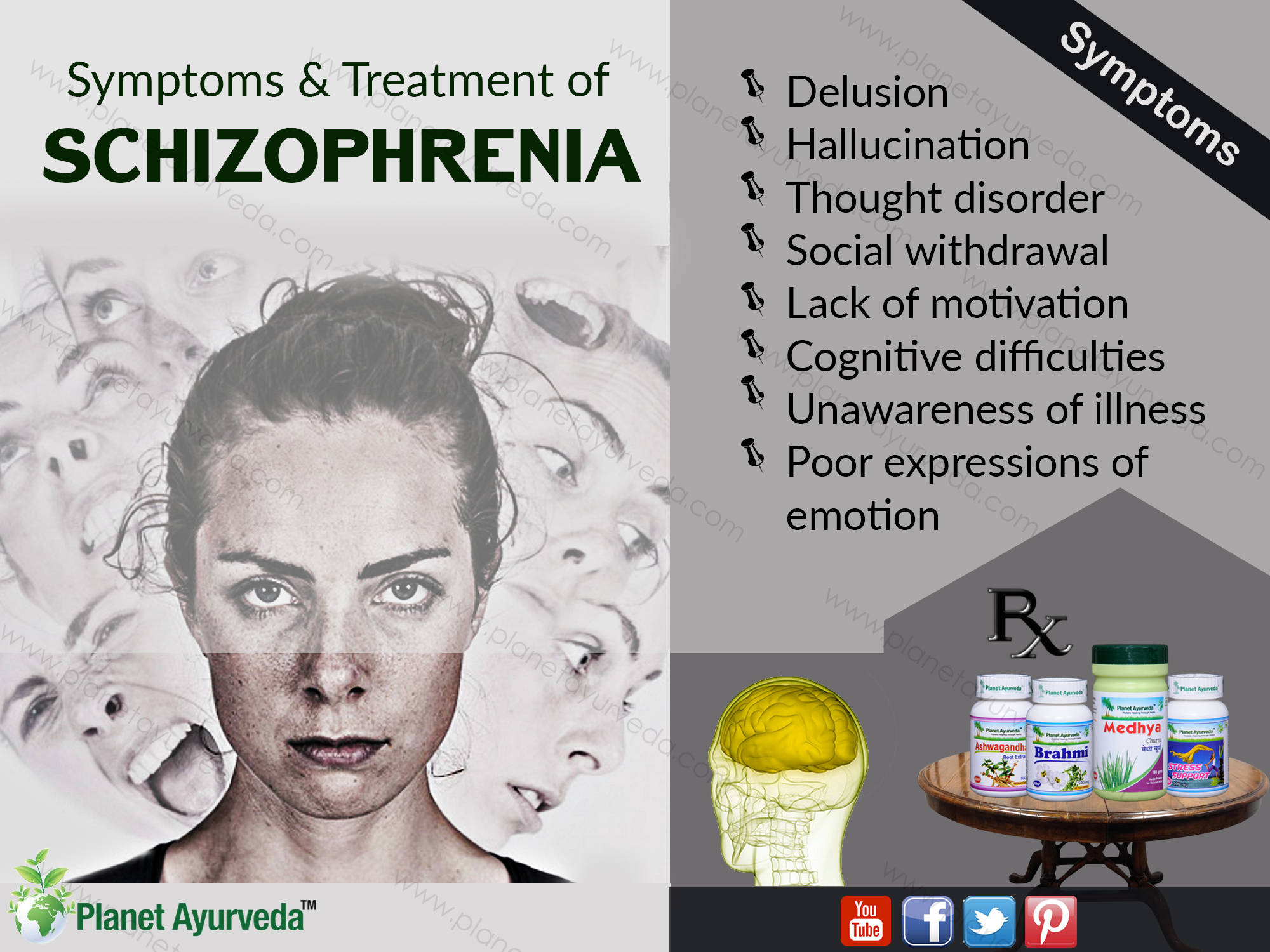 There are many more other symptoms that depend on the intensity of the disease. There can be negative, positive, cognitive and emotional symptoms.

There are various factors that can cause this particular problem. A genetic factor is also considered one of the main reasons. Besides that there are many other facts that are listed below.

People suffering from this problem have to deal with it for a lifetime. However, there are some ways to cure the symptoms of this particular disease.

There are some of the medications that are most commonly used for Schizophrenia i.e Risperidone (Risperdal), Olanzapine (Zyprexa), Quetiapine (Seroquel), Ziprasidone (Geodon), Clozapine (Clozaril), Haloperidol

As we know that there is no permanent solution to this mental disorder. Only certain medications can help in curing the symptoms of this particular problem. But one way in which this problem can be treated is by using herbal Ayurvedic remedies that are formulated by planet Ayurveda with pure and natural herbs that are free from any kind of side effects. Let’s discuss about these herbal remedies for treatment of Schizophrenia

These capsules are formulated for curing brain related problems and disorders. Brahmi herb is used in formulation of this particular capsule. This herb is also known for its usage in neurological problems.

Let’s discuss the benefits of this herb

Dosage : 1 capsule two times in a day with plain water

This churna is formulated by using many natural herbs. Let’s discuss about the ingredients used in the formulation of this churna:

These capsules are formed with three natural Ayurvedic herbs namely Ashwagandha, tagar, Brahmi that are considered beneficial for the nervous system and proper functioning of the brain.

These capsules are formulated using the herb known as Ashwagandha (with aniasomnifera) this herb is known to normalize the functions of the neuroendocrine system.

Let’s discuss about the properties of this herb

Not only the medication is sufficient, but it is advised to maintain a healthy lifestyle with good diet and personal care. Physical exercise is must and should be done on the regular basis to get free from this problem at the earliest. Regular and proper sleep is suggested.