Granulomatous meningoencephalitis is an idiopathic inflammatory central nervous system of dogs. It commonly shows neuropathic changes in dogs and cats. The central nervous system includes the spinal cord and the brain which controls the essential functions of life which include the cerebrum and cerebellum. Specialized tissues known as meninges cover the brain and spinal cord and have cerebrospinal fluid. The peripheral nervous system has nerves which coordinate the rest of the body. Neurons connect with each other and form the neurological unit which has 2 units known as dendrites and axons. It can be due to infections or immune-mediated causes and contains three layers which are dura (outer layer), arachnoid (internal thin meninge) and Pia mater (thin and highly vascular membrane). In this article, we are going to discuss the causes, symptoms and ayurvedic aspects of granulomatous meningoencephalitis in detail.

Granulomatous meningoencephalomyelitis is an inflammatory condition of the central nervous system which is mainly characterized by focal lesions which are present in the brain and spinal cord. It was first reported by Braund and his colleagues in 1978. Commonly seen in female dogs of young and middle age. The focal lesions are mainly seen in the white matter of the cerebrum, brainstem and in cerebellum. It commonly involves the infiltration by mononuclear cells which destroys the debris. In granulomatous inflammation, there are cuffs which are around the blood vessels of the brain and spinal cord. In pug dog encephalitis it is an idiopathic inflammatory disease which usually affects the prosencephalon which is commonly known as necrotising meningoencephalitis. It only differs from GME in more breakdown of the tissues and increase in eosinophils. The cells of the immune system release destructive biochemicals which invade the organisms of the disease’s tissue. 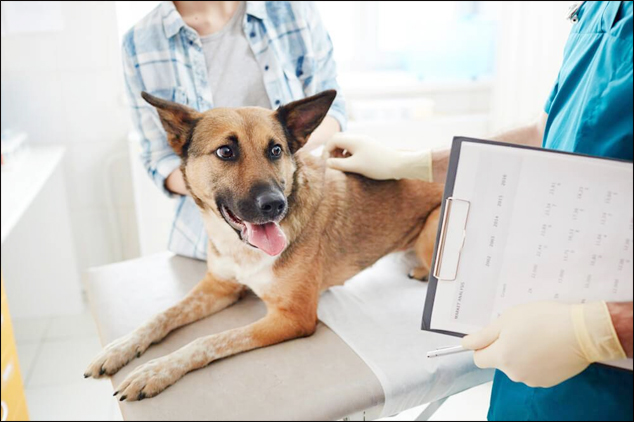 It is the diffuse type of disease present throughout the Central nervous system. It is also known as inflammatory reticulosis. Accumulation of mononuclear cells and neutrophils around the blood vessels in the form of meningitis which causes fever and neck pain.

It is present as granuloma which sometimes mimics tumors found in the cerebellopontine angle. It is a chronic progressive disease (3-6 months).

It is the uncommon form of Granulomatous meningoencephalitis which shows sudden blindness which is due to neuritis. This retinal detachment and secondary glaucoma are seen in this type.

In granulomatous meningoencephalitis, it occurs mainly within the white matter of the CNS (Central nervous system) which is characterized by dense inflammatory cells which are arranged in whorling patterns. There are varying numbers of Lymphocytes, monocytes and multinucleated giant cells which are mainly seen in the cerebrum, cerebellum and in the cervical spinal cord. These perivascular cuffs merge at blood vessels to form the whorls which form nodules which is due to the MHC class 2 and CD3+ T cells hypersensitivity reaction. Granulomatous lesions get compressed and get invaded in CND parenchyma which results in necrosis and oedema. The lesions are seen in the brain stem especially the pontomedullary region and white part. This lesion is usually detected by CT and MRI techniques.

A pug dog is a beautiful family dog which is associated with a rare neurological disease which is mainly fatal. Encephalitis is the inflammation of the brain tissue which tends to strike at 2-3 years of age. It causes inflammation and death of the brain tissue. Affects small dog breeds including Maltese, Chihuahuas and Yorkshire terriers. It is usually an auto-immune inherited disease, an idiopathic inflammatory disease which usually affects the prosencephalon (forebrain and thalamus). Also known as necrotising meningoencephalitis. The prevalence of pug dog encephalitis is about 1 % which differs from granulomatous meningoencephalitis which leads to breakdown and increase in the number of white blood cells (eosinophils).

It usually affects the discrete bone area which resembles a tumor. Various symptoms include are

Ayurveda is the oldest system of holistic medicine which means Science (ved) of life. Ayurveda in veterinary medicine has mainly focused on animal welfare, treatment therapies and management. In Rigveda, physicians described the treatment for both animals and humans and Salihotra was the first credited as an animal healer and wrote a book on veterinary medicine. Pandavas (Nakul and Sahadev as experts treated animals and the ayurvedic treatment for animals in modern science is known as Pashu Chikitsa. Pashu Chikitsa has been a vital part of Indian history and many animals are considered vehicles of dogs and goddesses, which shows the importance of animals.

Granulomatous meningoencephalitis is a dog’s condition which affects the nervous system and in ayurveda, it generally relates to inflammation which is due to vitiated pitta doshas, the vitiation of Kapha doshas (shows numbness as the primary symptom) along with Vata doshas. However, it shows the vitiation of tridoshas and the treatment will be advised to balance the imbalance doshas which is seen in dogs. Animals too have three primary types of Prakriti (Vata, Pitta and Kapha). Ayurveda has a history of extensive veterinary treatment systems which makes sense to discover from ancient texts and bring out the natural and side-effect-free treatment for our pets. The various medications which are useful for the management of Granulomatous meningoencephalitis are-

Planet Ayurveda is an emerging US-FDA-registered, GMP-certified ISO 9001:2015 registered ayurvedic company which formulates its own medications as described in the ancient ayurvedic texts books. These formulations are prepared without any preservatives which cause any harmful effect on the human body. Products which are manufactured are pure and devoid of any kind of adulteration. For granulomatous meningoencephalitis in dogs, planet ayurveda provides many herbal formulations which are causing no side effects and are useful for dogs. 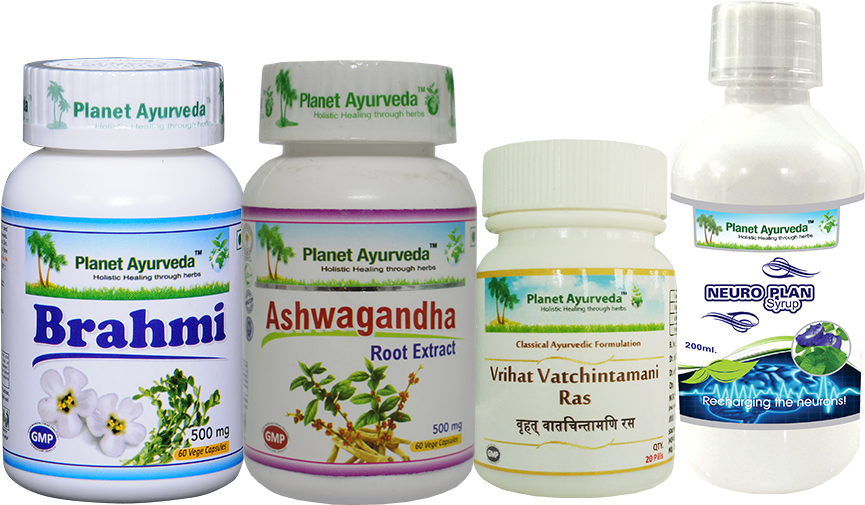 Neuroplan Syrup is a herbal syrup which is formulated by planet ayurveda using ingredients such as Brahmi (Bacopa monnieri), Bhojpatra (Betula utilis), Sonth (Zingiber officinale) and many more. Neuro plan syrup is helpful in maintaining pressure and stress on the nervous system. Enhances the power of nerves and strengthens memory and promotes energy. Has a soothing effect and relieves any kind of inflammation in the central nervous system.

Brahmi Capsules are single herbal capsules made by planet ayurveda using a standardized extract of Brahmi (Bacopa monnieri). These capsules are working as rejuvenating for the nervous system, used in ancient times as a brain tonic so known as a memory enhancer. Brahmi Capsule is a good supplement for the liver and is helpful in detoxifying it and enhancing the period of life.

Ashwagandha Capsules are single herbal capsules from planet ayurveda which contain standardized ingredients such as Ashwagandha (Withania somnifera). These capsules increase stress resistance and improve memory-related performances and perform the normal functioning of the nervous system. Provides calmness and mental satisfaction. Provides proper nourishment to the brain for proper functioning.

Vrihat Vatchintamani Ras is a classical ayurvedic product which is prepared by planet ayurveda using Swaran Bhasma (Calx of gold), Mukta Bhasma (Calx of pearl), Loha Bhasma (Calx of iron) and many more. These tablets are helpful in treating imbalanced Vata dosha and pitta doshas. Rich in antioxidants which act as a nerve tonic and strengthen the muscles of the heart. Has a cooling effect which reduces the aggravated heat from the body.

Granulomatous meningoencephalitis is an idiopathic inflammatory central nervous system of dogs. It commonly shows neuropathic changes in dogs and cats. Commonly seen in female dogs of young and middle age. The focal lesions are mainly seen in the white matter of the cerebrum, brainstem and in cerebellum. And the ayurvedic treatment for animals in modern science is known as Pashu Chikitsa. Pashu Chikitsa has been a vital part of Indian history and many animals are considered vehicles of dogs and goddesses, which shows the importance of animals. For the treatment of granulomatous meningoencephalitis planet ayurveda provided many herbal products which are useful in this without causing any side effects.