According to Ayurveda, immune system of the human body is compared with  “OJA”.Ayurveda considers OJA as most important part of all the seven dhatus  like rasa (lymph),Rakta(blood), mansa (muscle), meda (fat), asthi (bones), Majja (bone marrow) and Shukra (semen). Contagious diseases can be prevented by Oja.Oja is called “Dhatusara”. HIV has been known to be a causative agent for AIDS( Acquired immune Deficiency syndrome).When  there is Ojakshay in the body,the body loses its ability to fight against any  disease which can be correlated with HIV. Ayurveda contributes by stopping  replication of viruses, controlling viral load and CD4 count improvement,restoring  disrupted immune systems of the body and treating associated infections.

The causative agent of AIDS is HIV. It is the condition when the body’s immune  system gets attacked by HIV viruses which disrupts specific immune system  cells which may result in various infections in humans.It is the virus which  attacks T-cells or helper T cells of immune system.When a person gets infected  with HIV infection,the virus can be found in his body fluids like semen,vaginal  fluids, breast milk and blood.When this person have a sexual contact or blood  to blood contact or through breast feeding, normal individual gets easily  infected with HIV.

The disease is caused by dominant kapha doshas along with other doshas that tends  to block the pathway for the rasadi dhatus to flow in their desired places which  results in disruption of 7 dhatus which ultimately results in HIV.

HIV is caused by the virus.The transmission of HIV is described as follows:

The symptoms can be categorized according to the phase and severity of the infection:

Which is also known as Acute HIV

In this, people who are infected by this virus can develop the symptoms  within 2-4 weeks after entry of the virus and this stage may last for few  weeks.

Symptoms may be present in the infected person in this stage.It may last  for many years if not properly treated.

In this stage as the disease progresses,one may develop mild to chronic  symptoms such as

The following are the risk factors for this infection

Blood test is the best way to diagnose AIDS infection. The primary test
Can be done for diagnosing AIDS are

ELISA Test– which is Enzyme-linked immunosorbent assay.If a person is Positive for ELISA test, Western blot test is administered to confirm the Diagnosis.

Saliva Test– Saliva is obtained by using cotton pad and then that pad is kept in a vial and submitted for the testing purpose. One gets the results within 3 days.

Viral Load Test– This test detects the amount of infection in the blood.It is   Used to determine the progress of infection or to detect early infection.

Western Blot Test-It is one of the most sensitive and most confirmatory tests in this infection.

Ensuring a good and healthy atmosphere for the patient is a foremost step in this disease. Nutritious foods should be given to the patient.  Rasayana plays a very important role in boosting immunity levels and to   strengthen the system and stimulate appetite. Ayurvedic Rasayana treatment corrects the digestive fire and thereby improves the proper functioning of   the body. The seven dhatus can regain their strength due to rasayana.  Rasayana medications enhance the Oja and if the Oja gets enhanced the   Disease can easily be treatable and the relapse of the disease can also be Prevented. 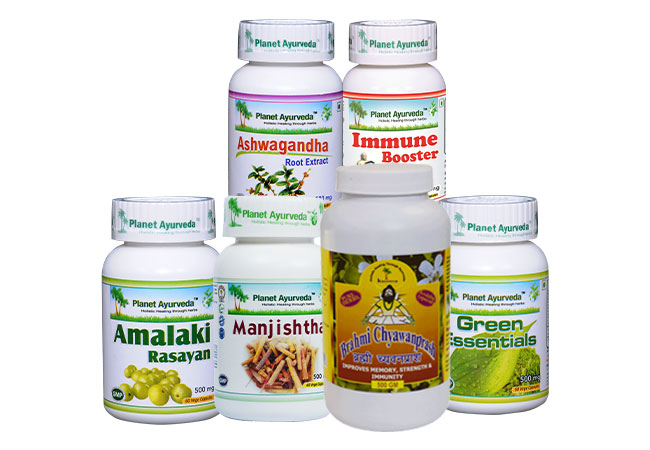 The pure herbal extract of Amalaki (Emblica officinalis) is used for  formulating this capsules.It is richest source of Vitamin C which can help  enhance the immune system which is required in HIV infection.It has  various elements like calcium, iron, antioxidants, minerals. This capsule  helps in maintaining the balance between 3 doshas.

The extract of Manjishtha (Rubia Cordifolia) is used for preparing this  medication.It has anti-microbial,anti-bacterial and blood purifying  properties.It helps remove stagnant blood and also helps to maintain balance between tridoshas with their proper functioning. It helps in  reducing pitta doshas

Ashwagandha (Withania somnifera) herb is used in this capsule. It helps in reducing inflammation. It delay the onset of HIV infection. It is one of the immunomodulation drug. It reverses HIV induced neuron degeneration. It reduces viral load which may reduce the symptoms of this disease.

It is a herbal drug prepared from brahmi (Bacopa monnieri),Amla  (emblica officinalis) etc.It helps in combating degenerative changes by  the body,enhancing the immune system. As it is rich in Vitamin C it helps in  reducing various infections thus maintaining proper health and immune system of the body.

This capsule is made up of various herbs like grape seeds (Vitis  vinifera), Cow colostrum (Bovine colostrum), Amalaki (Emblica  officinalis), Bhumi amla (Phyllanthus niruri).It is considered as the natural  supplements which acts on T cells and regulates T cells functions and  helps in eliminating toxins from the body.It also prevents recurrence of  the disease.

Dosage-1-2 capsules twice a day with plain water after meals.

Dosage-1-2 capsules twice a day with plain water after meals.