Candida is the type of fungus (a yeast) that normally lives on the skin and can grow in body areas such as gut, mouth and genital areas without causing any problems in normal levels, but the overgrowth of yeasts such as candida for a longer durations in gut can lead to multiple disturbances in the gastrointestinal tract & can lead to diseases such as chronic intestinal yeast. In this article we are going to discuss this disease in brief and its best possible Ayurvedic medicine.

The common clinical features of this infection proceeds with the ongoing inflammatory process in the abdomen as ulceration, and IBD conditions promote the colonization of Candida albicans The initial symptoms of this infection includes recurrent bloating after meals, excessive gas accumulation followed by constipation.

These symptoms are followed by leaky gut syndrome, as candida overgrown in the GI tract, it can exit to the bloodstream through intestines, spreading signs to other systems of the body. The most common of which are genital symptoms especially in females i.e. itching, burning micturition issues and increase in discharge etc. Furthermore, the oral thrush is another symptom which is characterised by white patches on the oral cavity including the roof of the mouth, tongue and throat. Loss of taste and difficulty in chewing and swallowing can be also experienced. The chronic stages may involve the brain and cause cognitive impairment, and chronic fatigue syndrome.

There are good probiotic bacteria that reside in our gastrointestinal tract especially in our large intestine. These good bacteria (e.g. lactobacillus) are being replaced by yeast overgrowth in candida infection, causing several digestion issues.

Following are the possible reason for this condition

Normally, there are 13 types of Agni that are mentioned in Ayurveda, which are collectively responsible for various bodily functions of the humans. Out of these, 13 agnis, five are bhootagniyan and seven dhatu agni (the five fires and seven types of energies) that are responsible for various metabolic and catabolic processes ongoing in the body at the cellular level & help in maintaining the normal functioning of bodily fluids and organs of our body. These 12 types of agnis are being monitored by and dependent on  the supreme jatharagni (the digestive fire- enzymes or hormonal secretions required for digestion). But the overconsumption of food articles and environmental factors that vitiate dosha predominantly kapha dosha such as excessive use of sweet, fluid items, pishta ann (grinded cereals), sandigdh ahar (oily food or junk food items), sleeping during day hours and other such factors will diminish the jatharagni (digestive fire) and this jatharagni will lead to the improper digestion of the consumed food, resulting in the formation of Ama (endotoxins)

It states that due to the jatharanaldaurvalyat weakening of the digestive fire, will result in formation of undigested food, and that undigested endotoxins are known as ama which is sarvadoshprakopnah (the main reason for the vitiation of all three doshas), which are the sole reason for various disease manifestations. The symptoms produced by ama in body includes,

Vishtambh means the stasis of fecal matter along with  sadnam-stiffness, fatigue, shirso rukk-headache, bhram-vertigo, angmard-malaise, trishna-thirst, jwar-fever, chardi- nausea & vomiting , aarochak-anorexia and avipaak-indigestion etc. These endotoxins along with the decreased digestive fire will disturb the normal metabolism maintained by the balance of tridosha and which in turn will promote the growth of yeast in the intestine and thus resulting in chronic intestinal yeast.

The management of chronic intestinal yeast on Ayurvedic principles is based upon the treatment principle described for ama along with some herbs or herbal formulations that enhance the healthy gut flora and correct the mandagni condition.

Planet Ayurveda Is A Leading Herbal Brand That Manufactures Herbal Products Which Are Being Trusted By Numerous Number Of The People Globally, And We Are Continuously Heading With Our Ethics And Moving Forwards Towards An Intense Vision Of Taking Ayurveda And Ayurvedic Formulation To Every Part Of The World, And Achieving The Goal Of Holistic Healing Through Herbs And Lifestyle Modifications. This Manufacturing Hub Is Focused On Making Herbomineral Formulations Based On Ancient Ayurvedic Texts And With The Help And Guidance Of A Expert Team Of Doctors These Herbal Products Are Being Formulated With Time Tested Formulas. 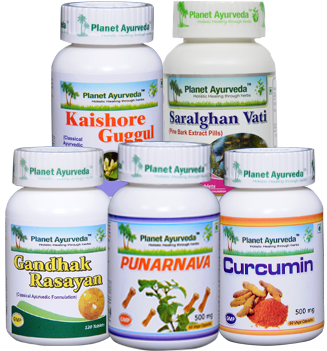 It is a classical formulation available in tablet form made from the single mineral extract sudh gandhak (i.e. purified form of sulphur). Sudh gandhak has been used since ages.

The properties of sudh gandhak is as follows

Gandhakshmatirasnah- means that gandhak is the best rasayn (having rejuvenating properties), sweet in taste and pungent in digestion process and hot in potency. In this shloka,  deeptananl means that gandhak is used to correct the mandagni condition associated with the yeast infection, and pachna means aids in digestion, also it is said to be amonmochnashoshno which means due to its potency and qualities it is perfect formulation for eliminating the ama conditions (endotoxins). Also, it helps in treating the bloating issues (aadhman) and killing the pathogens (krimiharah) in case of intestinal yeast condition.

These tablets are being prepared by the standardized extract of Saral (Pinus roxburghii). It has anthelmintic properties, digestive stimulants and a great liver tonic. It is used to treat the worm infestations (candida infection in this case), and flatulence condition due to chronic intestinal yeast. The phytochemicals of Saral are shown to have analgesic and anti-inflammatory properties.

As we know, that this fungi (Candida albicans) loves to reside in moist environment, Punarnava capsule having the extracts of Boerhaavia diffusa, facilitate the drying up of water content from the gut which as a result affect and promote the killing of colonies of Candida, also Punarnava promotes the digestive fire, which will help in treating the basic cause of the disease.

The effective classical  ayurvedic combination for various digestion related disorders. It contains ingredients such as trikatu- sonth (Zingiber officinale), marich (Piper nigrum) and pippali (Piper longum) which will enhance the digestive fire along with triphala- haritaki (Terminilia chebula), bibhitaki (Terminalia bellerica) and amalaki (Embellia offinalis) that promote elimination of the endotoxins (ama) along with the stool. Also the other ingredients such as guduchi (Tinospora cordifolia) and guggul (Commiphora mukul) etc. will promote the immune system for the ongoing intestinal yeast infection.

This formulation is made from the standardised extract of Curcuma longa in capsule form. Haridra (curcumin) has been used in Ayurveda since ages. In this phrase the krimighani property of haridra refers to the quality to eliminate toxins by its antioxidant, haridra is also rukshoushna, here ruksha guna of the curcumin aids in soaking the excessive moisture in the gastrointestinal tract (as moist environment favours the growth of yeast), and the ushna (hot potency) will increase the jatharagni (digestive fire). Thus, with this ruksha and ushna property of curcumin, it facilitates in reducing the excessive vitiation of kapha dosha in chronic intestinal yeast infections.

As we have discussed earlier that repeated use of antibiotics and other such modern medicines are the major cause for the disease, they usually gave symptomatic management for this disease, not focusing on treating the root cause of the disease, thus creating many relapse related issues. Whereas, Ayurveda treats the disease from the root i.e. mandagni and endotoxins (ama), by a holistic approach through herbal medicines along with diet and lifestyle modifications. Thus, Ayurveda offers a safe and healthy way to restore your gut flora and prevent it from chronic intestinal yeast.