What are the uses of Mukta pishti? – How is it made??

What do you know about the formation of pearls?!!

Basically, pearls are natural constituents found in the environment. When an irritant works its way into a specific species of  oyster, mussel or clam, a natural pearl (often known as Oriental Pearl) is formed. The mollusk exudes a fluid to coat the irritant which acts as a shielding mechanism. Layer upon layer of this covering is accumulated on the irritant, until it results in the formation of a dazzling pearl.

Since the archaic times, muktas (pearls) have been known for their healing properties. Permeated with amino acids, calcium & trace minerals, pearls have numerous profits claimed for skin and health. As per Ayurveda, pearls are an unequivocal antidote for all – be it in curing psychological issues, bringing down body heat, cooling the digestive tract, improving the skin lustre or yielding solace from stress. 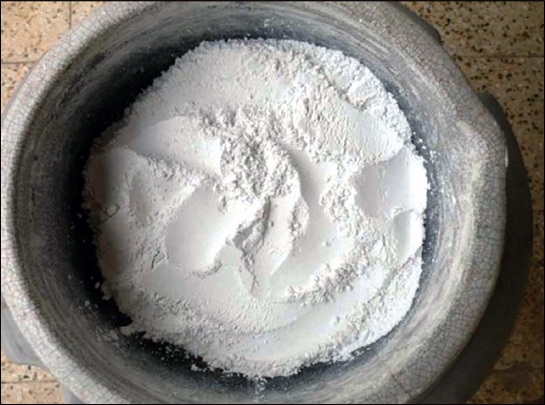 Mukta pishti also called Moti pishti, is an Ayurvedic formulation which is prepared from sterilised & scarcely seen freshwater pearl paste immersed in clear rosewater. It is generally white in color and is the innate & most refined form of calcium. It has no distinct taste but has a pleasant odor. The ancient Ayurvedic literature has detailed the use of this formulation which has been instilled with anti-inflammatory, antacid, anti-microbial, anti-stress, antidepressant and other innumerable properties.

How To Make Mukta pishti?

A panacea to elevate general health?!!

Ayurveda – the perpetual science of life! The main aim of this system of medicine is

To maintain one’s health and to relieve one who suffers.

Mukta pishti helps in relieving diarrhoea accompanied by bleeding & other bleeding disorders, immoderate burning sensation, dyspepsia, fever, diabetes, bone disorders, various eye disorders and so forth. It can be moderately used in treating the mentallly ill, comprising individuals suffering from psychosis, mania and depression. It acts by normalising kapha and pitta doshas which maintains serotonin level under control, thus lessening uneasiness and agitation related to anxiety.

The numerous beneficial features of Mukta pishti do not end here..! It goes on to include its functioning as a cardiac tonic, an aphrodisiac, a natural anti-hypertensive agent & enhancer of appetite. It is easy to digest, provides a cooling effect, promotes lustrous & flawless skin and even cures fever occurring at the time of teething in kids. 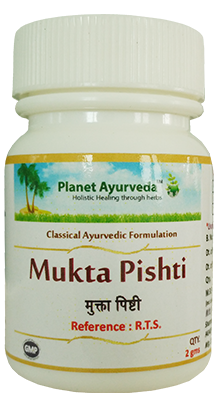 How effective is Mukta pishti in a psychological disorder?!

As a strong adaptogenic formulation, Ayurvedic Treatment with Mukta pishti is a very fruitful remedy for epilepsy, nerve fragility, hemorrhage, tuberculosis, other cognitive conditions like mental shock, short temperedness, tinnitus and so on. For these cases, it is prescribed along with few other restoratives like Brahmi ghritham, Saraswatarishtam, etc.

Mukta pishti can even stabilize the insobriety of deliriums such as dope, alcohol, datura, etc. Aside from healing psychological illnesses, it also gives efficacious results in sweating during the night. On the whole, Mukta pishti maintains a delicate balance between rakta and pitta. Special reference has been given to it in Ayurveda, in the treatment of raktapitta, rakta pradara, etc.

How is it administered? Does it have any side effects??

As an incredible formulation in the Rasashastra, Mukta pishti has been given sufficient importance in Ayurvedic scriptures, owing to its elaborate health benefits. It is considered an amazing adaptogen that helps in stabilizing kapha and pitta doshas, which in turn aids in controlling your emotions. Mental health, improved digestive power, glowing skin and enhanced immunity are merely a few among the benefits that constitute the tip of this gigantic ‘ iceberg ‘.