Eruptive syringoma is a rare variant of syringoma. This condition is understood as the benign adnexal tumor. These tumors are of the intraepidermal portion of eccrine sweat glands. Eruptive syringoma is of cosmetic importance because it does not cause systemic changes in the body or hampers the physiological functioning of the body. This condition usually develops in females during puberty or later in this article we will discuss about this condition in detail and also about its considerable ayurvedic management.

The word syringoma is derived from the greek language syrinx meaning tube. It was first described by Jacquet and Darier in 1887 and is capable of affecting 0.6% of the general population.  Eruptive syringoma shows differentiation in the intra epidermal portion of eccrine origin. Eruptive syringoma is often associated with down syndrome and multiple syringoma. Generalized or localized are associated with eruptive syringoma. This condition usually appears on the back and neck (in predilection and periorbital areas). The other rare forms of syringoma are plaque, linear, penile, vulvar, chondroid, solitary and sometimes on ankles also.

Such conditions usually have non defined causes but are generally related to people who have family history with eruptive syringoma, overactive sweat glands that causes overproduction of sweat and sweat glands get blocked.the patients who are suffering from marfan syndrome also suffer from the same condition. Generally the females with oily skin and health issues including diabetes mellitus and other conditions are also at risk.

The full pathology of eruptive syringoma is not understood but according to accepted theories the cutaneous inflammatory process that leads to hyperplastic reactive process in eccrine duct due to inflammation may cause eruptive syringoma. It is an accepted theory due to the appearance of cutaneous inflammation process after contact dermatitis, shaving, laser hair removal, radiation dermatitis and similar conditions like these.

In syringoma most commonly seen symptoms and signs include appearance of multiple small yellow eruptions on skin that are benign, redness on the affected areas is also observed along with the pain,itching or burning sensation in some cases. The papules generally are seen on the chin, eyelids, abdomen, near eyes and upper cheeks. Even on cutaneous examination multiple, symmetrical skin colored to brownish shiny papules measuring around 2-4mm in diameter was present all over the face and on upper extremities. Skin biopsy will show normal epidermis with benign proliferation of multiple eccrine ducts lined by two rows of epithelial cells. Also some of these have tadpole-like appearance and have an amorphous material in the ductal lumina. On the basis of such symptoms and finding of skin biopsy diagnosis is done in this condition.

Eruptive syringoma remains significant of cosmetic concerns as people with such conditions usually suffer from social unacceptance. This condition is highly unpredictable and can undergo regression with time but the course of time is not defined. So the treatment in eruptive syringoma is highly non standardized which includes excision, dermabrasion, cryotherapy, electrodessication, chemical peels especially with trichloroacetic acid, use of oral and topical retinoids is also administered. In addition use of topical atropine, carbon dioxide laser, pulsed dye laser and anti glandular eccrine monoclonal antibodies. But still of scaring remains with the surgical and chemical procedures. Even the recurrence is commonly seen.

Planet Ayurveda is a trusted GMP-certified company offering herbal products worldwide. For the management of eruptive syringoma, planet ayurveda also provides you with some of its medications. Planet Ayurveda medications are totally herbal and are very useful in reducing the symptoms caused by eruptive syringoma. These products are totally vegetarian and are made using standardized extract of herbs or from the chemical constituents of herbs.The products offered by planet ayurveda for the management of eruptive syringoma are as follows

It plays a very important role in subsiding the tumors that occurs in eruptive syringoma. Kachnaar guggul is an excellent classical herb that have ingredients like

Curcumin longa (haridra) is having curcumin as one of its chemical constituents. These Capsules are made using this chemical constituent and are potent to prevent or subside any infection. Curcumin also has anticancer properties, anti inflammatory properties and is very useful in skin ailments. It’s very important in reducing itching and pain. These capsules have blood purification properties as well.

These capsules are best known to balance pitta dosha and are manufactured using Rubia cordifolia (Manjishtha) only. These single herb capsules work wonderfully in reducing the increased function of sweat glands and also are very helpful in detoxifying the body. It is also very helpful in healing wounds and lesions. In addition it acts on inflammation and causes its reduction due to its antiseptic properties.

Eruptive syringoma is a condition whose specific cause or treatment is not mentioned in modern medicine. Ayurveda, which is a herbal branch of science, has many plants and minerals mentioned in its classics that help in reducing the symptoms of this condition and also helps to improve patients’ conditions. The herbal products offered by Planet Ayurveda in eruptive syringoma are very useful and show its noticeable effect. These products cause no side effects and are totally safe to use. In case of any query kindly visit www.PlanetAyurveda.com

Treatment of Afibrinogenemia in Ayurveda

Fibrinogen is a soluble glycoprotein and a clotting factor (factor I) which is an essential component for clotting present in plasma. This plays an important role in the breaking down of fibrinogen to fibrin by the enzymatic action of thrombin. Inherited fibrinogen disorders can be divided into two types i.e. afibrinogenemia and hypofibrinogenemia. This condition can be fatal if not managed properly by the Ayurvedic medicine system.

Afibrinogenemia is a rare coagulation disorder which is also referred to as congenital afibrinogenemia which is usually inherited as an autosomal recessive trait. This condition is generally characterized by the virtual absence of plasma immune-reactive fibrinogen (Factor I) which can be measured by antigenic or functional assays. The prevalence of this disease is estimated in one to 1,000,000 and male or females, both can get equally affected. (1) 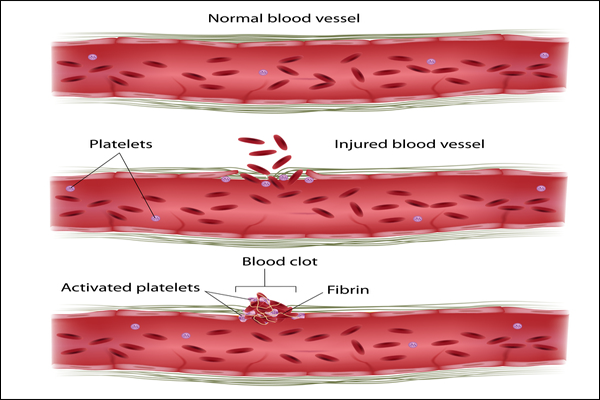 What are the Possible Causes of Afibrinogenemia?

There are two factors which can trigger this condition –

It is generally caused by fibrinogen deficiency in plasma which is triggered by homozygous or heterozygous mutations; affecting any of the three fibrinogen genes i.e. FGA, FGB, and FGG). This mutation results in the partial or complete absence of fibrinogen. Each gene is responsible for making a part or subunit of protein.

The parent of an affected infant with an autosomal recessive condition carries one copy of the mutated gene. These individuals are termed carriers and have abnormal levels of fibrinogen in the blood. (2)

The fibrinogen levels below 0.1 g/L; represents bleeding abnormalities which may range from mild to severe. It was studied that if bleeding occurs from the umbilical cord just after pregnancy; this can be an early alert to afibrinogenemia.

Some of the other Symptoms Include

How Afibrinogenemia Can be Diagnosed?

Doctors usually look at a person’s medical history, physical examination and certain laboratory assays are performed for the confirmation. A person with afibrinogenemia the results are based on the fibrin which is a product of fibrinogen. The tests include Thrombin time (TT), Prothrombin time (PTT), Reptilase time and activated partial thromboplastin time (aPTT).

This traditional herb is beneficial in pacifying Kapha dosha and balancing Pitta dosha. Lodhra works effectively in bleeding disorders and is considered an amazing coagulant which reduces bleeding and effectively healing wounds.

Lotus which is commonly known as Kamal kakdi has astringent properties so it is a proven natural remedy for bleeding disorders.

According to Ayurvedic principles, afibrinogenemia is considered as sejvikaras or congenital which gets triggered when there is one or more raktadhatu is absent. This ultimately results in interference to raktastambhak action of blood.

For Afibrinogenemia, Planet Ayurveda is offering 100% pure, natural and vegetarian herbal formulations which have been manufactured under the strict supervision of MD Ayurveda experts. Some of the herbal products include Pitta balance capsules, Cloto plan syrup, Kamdudha ras, and Mukta panchamrit ras. All these medicines will not result in any kind of side effects.

Dosage250 mg 1-2 times a day before or after meals. It can be taken with honey, milk or Luke warm water.

In order to conclude with this information, it is crystal clear that this rare bleeding disorder can get managed naturally with Ayurvedic herbs and herbal supplements from Planet Ayurveda.