Chronic pelvic pain syndrome or prostatitis is an all too common male genitourinary condition characterized by episodes of pain and discomfort, usually in an unpredictable manner. In the normal adult, the prostate weighs approximately 20gm. It is a retroperitoneal organ encircling the neck of the bladder and urethra and is devoid of different capsules. Classically, the prostate has been divided into five lobes, two of which are attributed distinctive significance in the development of tumors and benign enlargements.  The first five lobes include a posterior, middle, anterior and two lateral lobes. But some investigations show that these five lobes become fused into three distinct lobes, two major lateral lobes and a small median lobe which presumably includes the classic posterior lobe.  In this article we will discuss how an infection can affect the prostate and what symptoms it will cause. In addition we will also consider the ayurvedic aspect of prostatitis conditions and what formulations are best for its management.

Male chronic pelvic pain syndrome or chronic prostatitis is an urological disorder that can affect males in any age. If we understand in terms of chronic pelvic pain syndrome then prostatitis is termed as category 3 prostatitis or chronic prostatitis. The pain in the pelvis is associated in 90% of the cases and represents itself as the primary symptom of non bacterial prostatitis.the etiology for this condition is not fully understood so the treatment options vary according to age and severity of symptoms. Chronic prostatitis affects younger men aging upto 45 years. These patients can present with perineal and genital pain that can be of continuing nature. The prevalence of this condition in asia is estimated to be 2.7-8.7%. Prostatitis is termed as chronic when it is around 3 months or more. 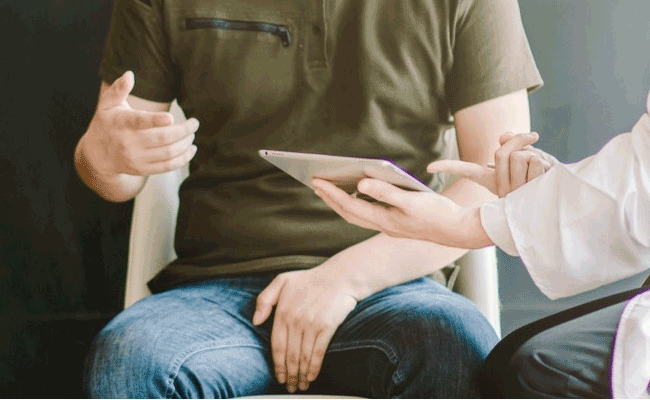 The chronic form of prostatitis can be due to bacterial invasion or can also present without bacterial invasion. In chronic pelvic pain syndrome the prostate is of non bacterial form. The reasons for the onset of this condition are not known but can be associated with the previous bacterial prostatitis. Other causes that can be included are psychological stress and damage to the urinary tract (can be the result of surgery or any blunt kind of physical injury). This abacterial type of prostatitis is sometimes termed as prostatosis.

Chronic prostatitis is a much more common condition than the acute form. When correctly diagnosed should be restricted to those cases of inflammatory reaction in the prostate characterized by the aggregation of numerous lymphocytes, plasma cells and macrophages as well as neutrophils within the prostatic substance. It should be pointed out that  in the normal senile chnages,  aggregations of lymphocytes are prone to appear in the fibromuscular stroma of this gland. All too often, such nonspecific aggregates are diagnosed as chronic prostatitis, even though the pathognomonic inflammatory cells, that is the macrophages and neutrophils are not present.

It can start with the local symptoms like low back pain, discomfort and then slowly will associate with frequent micturation especially at bedtimes, dysuria (pain during micturation), difficulty in urination, sense of urgency when you need to urinate, tenderness or pain in perineum, the space between scrotum and anus. Pateint may present with symptoms like sextual dysfunction and some systemic conditions like urine retention. Pain may also be present in penis or testicles, as mentioned earlier the condition is quite common in young males so difficulty in ejaculation is also a very important symptom. Either the patient will have above described symptoms or may just present with recurrent urinary tract infection.

In Ashtanga hridaya acharya vagbhata mentioned that due to vitiated vata a glandular, hard, stone like, stable and predominant structure occurs between the passage of malamarga (rectum) and basti (urinary bladder). This results in obstruction of mala, mootra and apana vayu and thus symptoms like pain, dysuria, urgency, increased frequency occurs. (Ashtang hridaya nidaan sthana 9/23-24 ). Above mentioned stanza indicated towards enlargement of the prostate which can be noticed in benign prostate hypertrophy, prostatitis and prostatic cancer.

In local examination per rectal examination is done to check any swelling or inflammation in the prostate. Other test might include the following:

In modern medicine a limited and varying medication is prescribed due to the non understandable cause of this condition. Prescriptions usually include non steroidal anti inflammatory drugs, alpha blockers, muscle relaxants and psychological therapy for stress and anxiety. If nothing works then finally surgery is suggested. Ayurveda manages a condition according to its root cause. Generally vrishya and rasayan, shoothanashak, herbs that inhibit 5a reductase inhibiting activities (5a reductase are the enzymes that convert testosterone into dihydrotestosterone which is important for the inflammation progression of the prostate) like saw palmetto, prunus africana etc. and diuretic drugs. 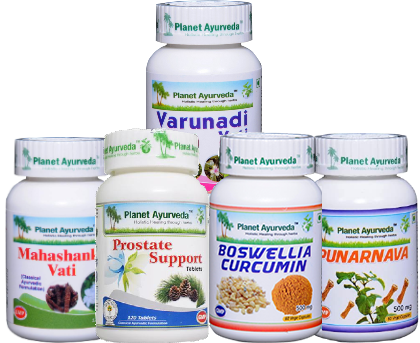 These  tablets are exclusively formulated to support the functioning of the prostate, reduce inflammation and prevent urine retention and dysuria. The herbs that are included in this formulation are gokshura (Tribulus terrestris), varuna (Crataeva nurvala), Kanchnaar (Bauhinia variegata), punarnava (Boerhavia diffusa) and saralghan (Pinus roxburghii). All of these herbs are potent to reduce prostate inflammation, reduce pain and prevent urine urgency frequency and retention.

Mahashankh vati is formulated to help in the enhancement of digestion and also relieves symptoms like bloating and indigestion due to malaavrodha in prostatitis. It is a classical formulation and is manufactured using piper longum, chitrak (Plumbago zeylanica), danti (Baliospermum montanum) and many more.

It is a classical formulation which is formulated using shuddha guggul (Commiphora mukul), gokshur (Tribulus terrestris), varun (Crataeva nurvala), and punarnava (Boerhavia Diffusa). Gokshur and punarnava are famous for their diuretic actions and varuna is having diuretic properties and also has laxative properties. Varunadi vatti is also used as a non hormonal preparation for managing benign hypertrophy of prostate and also for avoiding residual urine in void.

Boswellia curcumin capsules are manufactured using two potent and effective herbs which are Shallaki (Boswellia serrata) and Haridra (Curcuma longa). Both of these herbs have anti-inflammatory properties that help in reduction of swelling and pain.

Punarnava (Boerhavia Diffusa) is a very potent herb that helps in excretion of excess fluid in form of urine and also helps in enhancing bladder functions. These capsules are made from the standardized extract of punarnava.

Prostatitis is very common in young males and the reasons for this condition are not clear. Ayurvedic management of this condition is very much possible using above mentioned formulations. Prostatitis should not be ignored for long otherwise hydronephrosis due to prolonged urine retention can be noticed and indigestion symptoms can exacerbate. In case of any query kindly visit www.planetayurveda.com