An Ayurvedic Perspective of Depression ( Vishada)

One in four people in the world experience mental/ neurological disorders at some point in life. Ayurveda is the science which not only treats your disease but also maintain a healthy person’s healthy life as said in its aim (prayojana)- “”Swasthashya swasthya rakshanam aturasya vikara prashmanam ch”. Recent cases of mental disorder are found, whether, in the daily life of a housemaker, sportsperson, or in the entertainment world too and reviews on ayurvedic studies of ancient times also reveal that psychiatry also had their role in those eras. So, this article describes “depression” along with its management and treatment.

Depression is more than sadness (SAD – Seasonal Affective Disorder), many people use the word depression to explain the feeling like – life’s struggle, setback, disappointments, but it’s more than that. 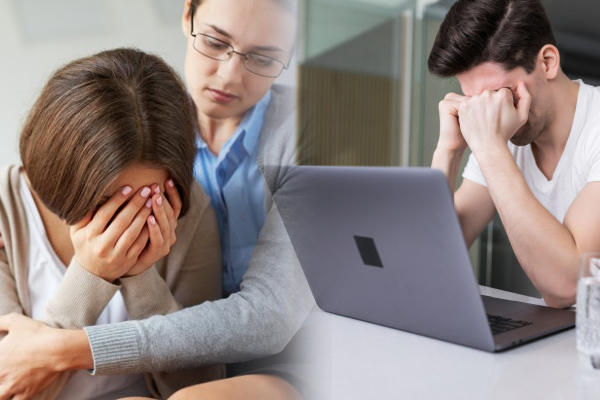 Vishada is witnessed in the Arjuna Vishada Yoga, the first chapter of Bhagavat Gita(verse 14), where Arjun mighty warrior describes his helpless condition as- Arjun says, my limbs feel weak and loose, my mouth dried up with heat, tremors all over my body and I feel horripilation,my bow slips from my hand and my skin is burning all over, my brain is whirling and I can’t stand any longer.

According to Dalhan-[vaka kaya chitavsaadvishadam] i.e vishada is the state of avsada which is characterized by lassitude of spirit,body and mind,where the physical and mental retardation of the individual is understood.

Aetiology/nidana (Cause of depression): basic nidana- 1.Asatmendriyathsamyoga- unwholesome contact with the objects may be in the atiyog( excessive use) ,ayog ( no use) ,mithya yog( incorrect use), and sometimes it also occurs due to social abuse.

PATHOGENESIS: vishada affect our mind (Mana) by above nidan and thus leads to-

The complications that can be seen 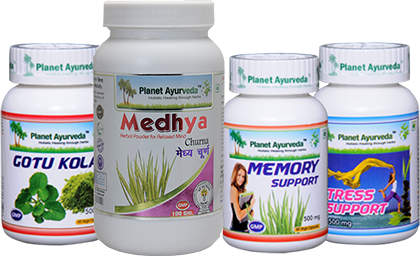 To deal with depression Planet Ayurveda has contributed its best. Which not only will help to strengthen the nervous system but will bring clarity in the higher mental functions of the individual. So, to tackle this disease you must follow this Ayurvedic Medicines for Depression as described in the Depression Care pack. It includes the following medicines:

So, in combination, this product helps in depression and stress management.

Significance– Brahmi is a brain tonic and Vacha helps to stimulate the normal functions of the nervous system, they synergistically act along with Shankhpuspi because of its medhya and cooling properties, it is a great choice to alleviate depression.

In addition to this, the product helps in sleep disturbances and memory support also.

Significance– Brahmi, and Ashwagandha acts as nervine tonics. They help to normalize the hormones.

“Tagar – Tagar is also used in apasmara is one of the mental disorders, hence this product is helpful in depression.

Others Procedures To be Taken

Psychological and psychodynamic methods [SATVAJAYAYA] are assigned to individuals, this helps for the normal state of patients. So, must follow the above-given guidelines to manage depression.

And Most Importantly ☝️

�”Hate the disease, not the person who is fighting or is the survivor of it. “Talk with him/ her all they need is the support “and we can pull him/ her out from that hole (depression). 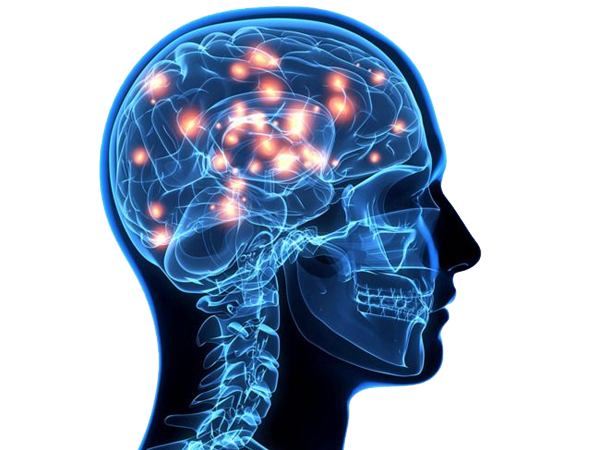 Introduction About The Nervous System

The nervous system is like a network that controls, regulates, and maintains communication within the body. It controls all activities like learning, thought, and memory. A nervous system is a group of nerves and cells that are known as neurons that sends signals between different parts of the body. We can say that it works as an electric wire. It is composed of many organs mainly nerves, brain, spinal cords, and ganglia. Together they handle the activities of the nervous system. Ganglia are the cluster of neurons and nerves are connected with one another and with the central nervous system.

The main three activities of the nervous system are sensory, motor, and integrative. There are many sensory receptors that are present inside and outside of the body which only monitors the changes known as stimuli. They detect light, odor, motion, sound, and temperature from the external environment, and from the internal environment, they detect pH, concentration in carbon dioxide, pressure variation, and the level of electrolytes. This sensory input is converted into electrical signals which are known as nerve impulses.

The nerve impulse is then transmitted to the brain. In the brain, all the signals are brought together in order to produce sensations, thoughts, etc. Decisions are made with this activity and this process is called integration. Now after this, the nervous system responds by transmitting all the signals to muscles for the contraction. Glands and muscles are called effectors because they respond according to the nervous system. This is called a motor function.

Parts of The Nervous System

It Has Two Main Parts

What Happens When The Nervous System Gets Disturbs?

Our nervous system is full of protections. The brain is guarded by the skull and the shield of small bones protects our spinal cord. After all these protections, there are many factors that damage our nervous systems like infections, injuries, stroke, and issues with blood vessels. Many neurons in the central nervous system cannot repair themselves because of some illness they may damage or die. So, in this situation, the nervous system loses some abilities. There are also various problems that suddenly attack the nervous system.

Symptoms depend upon which part of the nervous system is attacked. As we know there are three types of nerves in our body.

When Autonomic Nerve is Damaged it Includes The Following Symptoms

When Motor Nerve is Damaged, it Shows Symptoms

When Sensory Nerve is Damaged, it Produces the Following Symptoms

The Other Signs and Symptoms of the Nervous System Disorder Include

Diseases of The Nervous System

Nervous System Disorders can lead to various complications depending on the current situation of a person. Some of them are as follows

The damage to the nervous system cannot be cured. But yes, there are some points which if kept in mind and followed will help in the prevention of further complications and may help to reduce the symptoms. So, if you see any symptoms in your body then you should consult a doctor immediately. You should also take care of following things that are mentioned below:

What Ayurveda Has to Restore the Health of The Nervous System?

Ayurveda has the potential to deal with many diseases with the natural system of medicines. Ayurveda is a vast topic. It provides an easy approach to treating illness through natural therapies and lifestyle interventions. Ayurveda makes remedies with natural herbs that are pure and safe with no side effects. In the present day, there are many Ayurvedic Products available in the market. It is important that we constantly take care of our bodies in every possible way.

In Ayurveda, Ashwagandha balances the Vata and Kapha for building strength in our bodies. From Ayurveda, the health of the nervous system improves by the use of Ashwagandha (Withania Somnifera). So, it is said that Ashwagandha and Brahmi are the two main elements of Ayurveda. Both are used to calm our brain and also used to boost up our immunity. 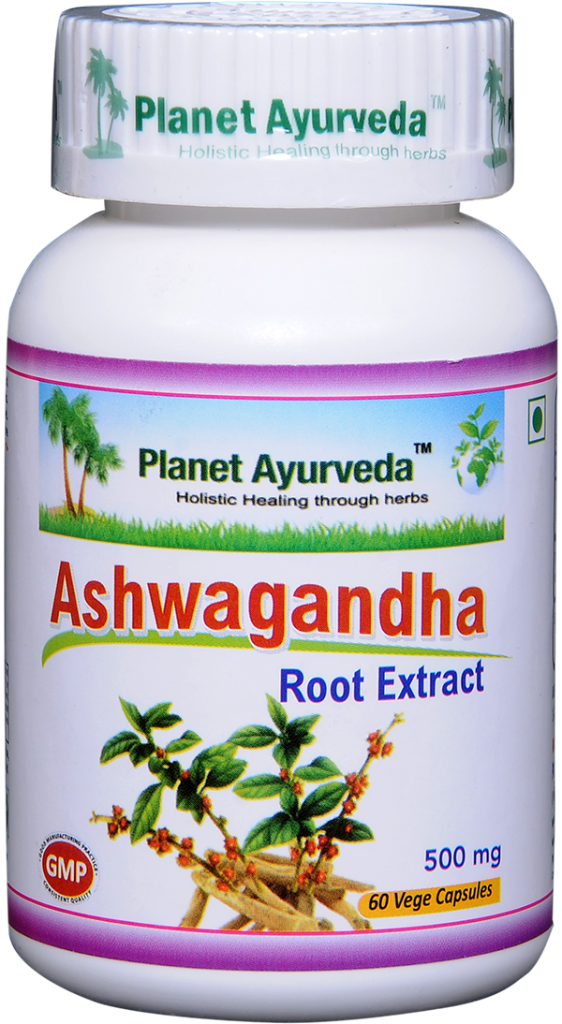 Ashwagandha is very useful for plants used to make medicines. Ashwagandha grows in India and many parts of Africa. By definition, the word ashwa means horse. It helps us to maintain our body physically as well as mentally. It is used to treat many diseases like arthritis, insomnia, stress, depression, diabetes, fever, loss of memory, skin conditions and many more. The leaves, seeds, and fruits of Ashwagandha are used for various treatments. This herbal supplement increases the stamina, power, and strength in human beings. Especially for men, Ashwagandha is very useful and effective to revitalize the body functions. Ashwagandha also helps in the nervous system by reducing stress and providing support to our brain.

Planet Ayurveda also offers the best herbal formulations like Ashwagandha capsules, Ashwagandha powder, Ashwagandha Ghanvati, etc. which is prepared under the strict guidance of Ayurveda experts and by following the ancient Ayurvedic principles. This formulation is chemical-free and safe to use ss they do not cause any side effects. There are other supplements also in which Ashwagandha is present in the formation of herbal medicines which are getting prepared in Planet Ayurveda.

The nervous system is an important system that coordinates all the activities of the brain and other parts of the body. By the use of electrical and chemical signals it sends and receives messages. Symptoms of nervous system diseases that affect our body are headaches, back pain, stress, anxiety, muscle weakness, loss of vision, etc. in order to reduce it we suggest some preventions and home remedies for treating the nervous system. Planet Ayurveda offers Ashwagandha related herbal medicines that are used to treat the symptoms of the nervous system. The herbal remedies are safe and natural with no side effects.