What is Giant lymph Node Hyperplasia

Giant lymph node Hyperplasia is also known as Castleman’s Disease or angiofollicular hyperplasia. Castleman’s disease is named after Dr. Benjamin Castleman, who first described this Giant Lymph node Hyperplasia (Castleman’s disease) disease in 1956. It is a rare disease in which there is an excessive proliferation of lymphoid tissue due to the division of its cells (proliferation) – lymphocytes, which normally fight various diseases. It has localized (unicentric) or widespread (multicentric) flow variants.

There are Three Established Subtypes of Castleman’s Disease.

In Unicentric Giant Lymph Node, one or more enlarged lymph nodes are present in one area of ​​the lymph nodes. It is one of the common subtypes of Giant lymph node Hyperplasia disease and, its symptoms tend to be milder, organ dysfunction is rare, and surgical removal of enlarged lymph nodes is the treatment of choice.

It is not yet clear what causes Giant lymph node hyperplasia. It is known that infection with the herpes simplex virus type 8 is associated with a multicentric variant of the disease.

Human Herpes Virus 8 type (HHV-8) is also associated with the development of Kaposi’s sarcoma, a malignant tumor of the walls of blood vessels that can be a complication of HIV / AIDS.

Castleman’s Disease is one of the rare problems that individuals face. Giant Lymph Node Hyperplasia symptoms differ from person to person. It is an enlargement of lymph nodes that are present in various regions of the lymph nodes and infection with human herpesvirus 8 is present. Some of the symptoms which can be felt as a result of Giant lymph node hyperplasia can be:-

Many people with unicentric Giant Lymph Node Hyperplasia have no symptoms. Lymph nodes in the chest, abdomen, and neck are most commonly affected. When symptoms appear, they include:

Other less common symptoms include:

The multicentric variant of Giant Lymph Node hyperplasia disease can lead to the development of life-threatening complications, such as:

If you notice an enlarged lymph node in the neck, collarbone, armpit, or groin, see your doctor. It is also worth doing this if you have a persistent feeling of heaviness in your chest or abdomen, fever, fatigue, or unexplained weight loss.

The Ayurveda medical system (life science) is the traditional system of Indian Vedic medicine, in which holistic principles are practiced, focused on maintaining the health and active longevity of each individual. This ancient Indian doctrine of health and longevity is now popular in many countries of the world and in 1985 was recognized by WHO as the most effective system of oriental medicine.

Long before the deciphering of the human genome, the Ayurvedic physician relied on a constitutional approach to establish the root cause of the disease. The constitution (original nature) can be considered as a generalized morphofunctional characteristic of an individual, which reflects the characteristics of the physique, mental activity, metabolism, and functioning of autonomic systems, adaptive, compensatory, and pathological reactions of a person.

The individual constitution of a person consists of doshas or humor – Vata, Pitta, and Kapha. Translated from Sanskrit, dosha is “that which is out of balance.” Most likely, dosha is a unity of energy, information, and matter, which determines a special psychotype of a person, his individual homeostasis, metabolism, an individual “life route”. Doshas are the qualities that make up our body and personality, the different ratio of doshas in each person determines his uniqueness, individuality. However, all three doshas in different proportions are present in every person. And this unites us. The balance of three energies- Vata, pitta, Kapha leads to disease Free State, according to Ayurveda. So we have prepared a perfect blend of herbs that synergistically helps to control the balance of theses Doshas. 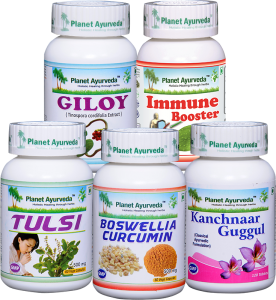 These effective Capsules are the perfect blend of Shallaki(Boswellia serrata) and Curcumin (Haridra) (curcuma longa). These herbs are anti-inflammatory herbs and help in prompting circulation in joining. It is a beneficial supplement for providing relief from cartilage pain as it does not get much blood flow.

Dosage– 2 tablets, twice a day, with normal water, after Meal.

These capsules are prepared by using the pure extract of Tulsi (Ocimum sanctum) herb. It has anti-microbial properties. Tulsi Capsules are helpful in many serious problems like Auto-immune Disorder, Cancer, Skin Allergies, Chronic Sinusitis. Disciplined use of these capsules will help the body to fight against various infectious diseases in effective ways.

It is a natural supplement for maintaining the overall health of the human body. It is an excellent formulation that is very useful for managing various health ailments. The main components of these capsules are Grapeseed (Vitis vinifera), Cow colostrum (bovine colostrum), Bhumi amla (Phyllanthus niruri), Amalaki (Phyllanthus emblica). These herbs help in strengthening and building immunity that guards our body against various diseases.

Giloy Capsules are formulated by using a standardized extract of Giloy herb (Tinospora cordifolia). This wondrous giloy herb has been used in Ayurveda since ancient times. It helps in fighting the body against infection and building up a strong immune system. Giloy capsules are beneficial in managing weakness, swine flu, urinary tract infections. It effectively helps in increasing blood platelet count.

From the above article, we came to know that Giant lymph node hyperplasia is an enlargement of lymph node in the body. It is one of the rare diseases that may happen to anyone. However, before panic begins to rise, it is important to understand the different ways to maintain our well-being on our own with the help of simple changes in lifestyle and diet, guided by knowledge about our type of constitution (Dosha) and its inherent advantages or weaker features. Planet Ayurveda Herbal medicines will help you in the Treatment of Giant lymph node Hyperplasia by balancing doshas of the human body.