Glossopharyngeal neuralgia is a rare syndrome that affects the ninth cranial nerve that is Glossopharyngeal nerve, with repeated episodes of the disorder. The main function of the Glossopharyngeal nerve is oral sensations and taste sensations. In this condition, there is a sharp pain in the tongue, throat, tonsils, and ear. This pain can last from a few seconds to minutes. The source of irritation is not found in most cases. But many factors can cause neuralgia, which is discussed further. Pain can be in episodes and can occur many times a day. Pain can be severe while resting which can wake the person from sleep. 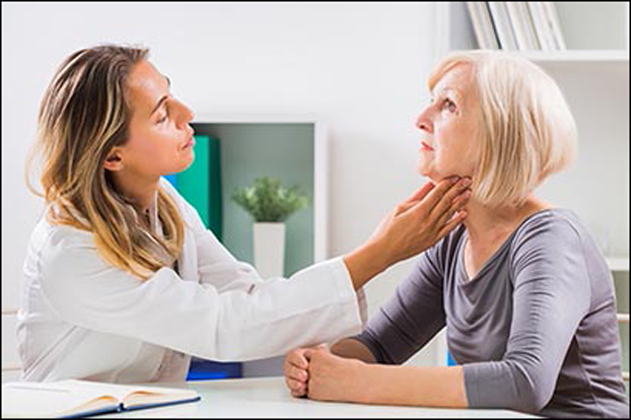 According to Ayurveda pain is caused due to aggravation of Vata dosha. Glossopharyngeal neuralgia is classified as a ‘Vataja Vyadhi’. The aggravated Vata causes symptoms of pain in the nerves. The Vata aggravates due to inadequate diet and lifestyle. On consuming Vata vardhak aahar and living Vata vardhak lifestyle, the symptoms of pain increase, and a sudden sharp pain occurs. Therefore, in its treatment, the main focus is to manage health with herbs as well as proper dietary plans and lifestyle modification. Once the Vata dosha is pacified, the symptoms will themselves reduce and ultimately ease the disorder.

The main symptom of Glossopharyngeal neuralgia is nerve pain. The pain can radiate from the neck region to nearby regions.

Common areas of pain are

Also, the pain can be triggered while

The diagnostic tests are indicated according to the symptoms. The main motive is to rule out the cause of nerve compression. It can be done by-

Planet Ayurveda is a leading manufacturing company of various herbal medications with the best overall result for 20 years. Their products are 100% pure and vegetarian and are made from standardized extracts of various potential medicinal plants by expert ayurvedic physicians. It has been preparing several herbal medicines that are successfully treating several diseases worldwide. This company is internationally certified. They strictly follow government guidelines for making their products the best. Their preparations are 100% pure and also free from any kind of preservatives. The herbal medications used in the management of Glossopharyngeal neuralgia are- 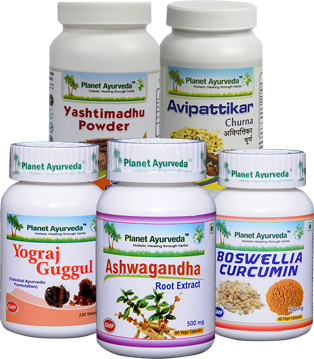 This patent formulation is prepared with Turmeric (Curcuma longa) and Shallaki (Boswellia serrata). These herbs increase immunity and also act as an antioxidant. Their anti-inflammatory action is helpful in inflammatory diseases. Boswellic acid and curcuminoids present in these capsules work by inhibiting topoisomerase and reducing brain edema, which helps release brain relaxants and reduce tension in nerves and reduce pain. These capsules ease symptoms of pain in the nerves.

Dosage– Have 2 tablets twice daily after meal with plain water

These capsules are made from extracts of Brahmi (Bacopa monnieri) – whole plant, and Ashwagandha (Withania somnifera) roots. Both of these herbs are very efficient in treating brain nervine disorders as well as increasing the overall immunity of the body. They can help the person by nourishing the nerve in the brain and controlling pain-like symptoms.

Dosage– Have 1 capsule twice daily after meal with plain water

This classical formulation is made with a combination of herbs like – Baheda (Terminalia bellirica), Peepal (Ficus religiosa), Amla (Emblica officinalis), Vidanga (Embelia ribes), Tejpatta (Laurus nobilis), Green cardamom (Elettaria cardamomum), Nisoth (Operculina turpethum), etc. This herbal mixture is mostly used to balance Pitta dosha in the body. It acts as a strong antacid so is also helpful in throat conditions. Consuming a good quantity of this churna can ease symptoms of Glossopharyngeal neuralgia.

This churna is made from extracts of Yashtimadhu (Glycyrrhiza glabra).  It is also considered a Rasayana. It has main indications for usage in oral treatments, respiratory and digestive disorders, chronic bronchial conditions, acidity, ulcers, and any throat-related problems. It is helpful in this condition as it will help in reducing the symptoms and increasing the overall health of the person.

Ayurveda believes to treat the conditions from their root cause. Natural herbs, diet, and lifestyle will pacify Vata dosha and treat this condition, under the guidance of an ayurvedic doctor. The ayurvedic approach to balance doshas helps manage these conditions. Ayurveda is a way to reclaim your health naturally without side effects. For any queries visit us at www.planetayurveda.com

Hereditary motor sensory neuropathy is an inherited nervous disorder that is also called as Charcot marie tooth disease. This disease is progressive in nature in which nerve cell deterioration is the main pathology. This concern is majorly seen in the legs and less commonly in the arms. The muscles of feet and hands get weak as the impulses towards these muscles are hampered. In addition to this there are a lot of symptoms to be faced that we will discuss further, so before studying the symptoms of HMSN let’s discuss the causes of HMSN.

There is no certain cause of HMSN, this disease is inherited. Chromosomes 1 and 17 seem to be affected chromosomes with mutation. It is inherited in autosomal recessive, autosomal dominant and the x-linked manner. Beside this there are some risk factors of HMSN such as Americans worldwide and in the generations children are more affected.

The symptoms of HMSN can vary from person to person and it’s not possible to predict the age at which symptoms may appear. There are some early symptoms, main symptoms and later symptoms of HMSN, let’s discuss further.

There are some additional symptoms that are noticed in some persons

As the HMSN proceeds to the later stages the weakness in the muscles and the sensation loss get worsened  that can start to affect the hands and arms the most. There is difficulty in performing even small tasks such as buttoning the shirt and performing day to day activities such as bathing, walking, sitting, etc. When they walk it puts strain on the muscles that further lead to joint and muscle pain. With growing age the mobility gets worse and a person may need an aid for walking.

The diagnosis of HMSN is done with the motor nerve conduction test and EMGs. A person to be diagnosed with HMSN should undergo a complete diagnostic and a clinical evaluation. The clinical diagnosis is done for the muscle weakness, atrophy and all types of sensory responses. For more clear diagnosis a blood DNA test is to be done.

As we read earlier the HMSN is an inherited disorder, so as per ayurveda it is correlated with beeja dosha, which means the condition occurs with the defect in beejbhaga (sperm and ovum). Ashudh shukra and Ashudh artava (defected sperm and defected ovum) are considered as  the main causes of this condition. If there is any defect in the gametes (sperm and ovum) of parents then the child should inherit the disease. Beeja dosha due to the fact that if the mother conceived when her uterus or artava (gamete) is not totally vitiated but troubled by imbalanced doshas because of her improper diet intake. If there is any defect due to beej bhaga then cause beeja dosha and the deformity will occur in the fetus. As it is an inherited disease, we may manage the symptoms of the disease and there are some natural herbs that manage the symptoms of the disease and make the affected person’s life better by improving the quality of life.

Planet Ayurveda is a GMP certified clinic which provides treatment for a wide range of diseases. All their remedies are formed under the guidance and supervision of M.D. ayurveda doctors and 100% purely vegetarian. Also while formulating their remedies they take care that any kind of added synthetic material should not be added to it like any sort of resins, fibre, colour, preservatives and all. For managing HMSN Planet Ayurveda listed 7 herbal remedies. Further we are going to discuss all about these herbal remedies and how it benefits the HMSN patients.

Ashwagandhaghan vati by Planet Ayurveda is a herbal remedy in tablet form which consists of a single herb Ashwagandha (Withania somnifera). As we discussed earlier the HMSN is an inherited disease so we can focus on managing the symptoms of the person and making the day to day life more ebay. So mainly the vata dosha is responsible for maintaining the neurological symptoms. Ashwagandha ghan vati helps in balancing vata dosha this helps in maintaining the symptoms of the HMSN.

Kumari saar is a herbal juice preparation formed by Planet Ayurveda with the help of juice extract of kumari (Aloe barbadensis) leaves. As we know the patients affected with HMSN need a perfect rejuvenation for leading a good quality life. This herbal remedy helps in providing that rejuvenating property to the patient and helps in boosting the immunity which makes the quality of life improved in the patient of HMSN.

Tribulus power is a herbal remedy in capsule form that is formulated by Planet Ayurveda under the strict guidance of M.D. Ayurveda doctors. These capsules consist of pure herbal extract of gokshura (Tribulus terrestris) which contains various properties such as immunity-boosting and rejuvenating. So both these properties help in assisting the management of HMSN symptoms.

Musli strength capsules are available in capsules form and consist of standardized extracts of  safed musli (Chlorophytum borivilianum)  and gokshura (Tribulus terrestris). Safed musli is known for the rasayana (rejuvenates cells) and bruhmana (nourishing) properties. Gokshura consists of madhura rasa (sweet taste) which is  also nourishing in nature.   Both these herbs are very best in providing strength to the muscles and hence prevents the progressive muscle wasting in HMSN.

Vrihat vatchintamani ras is a classical ayurvedic formulation in tablet form. This is a herbo-mineral remedy which is prepared by Planet Ayurveda as per the method of preparation available in the classical texts. It consists of ingredients such as swarna bhasma (calyx of gold), rajat bhasma (calyx of silver), abhrak bhasma (calyx of mica) and various others. All the ingredients present in this ayurvedic formulation consists of miraculous vata balancing effects as the name suggests along with that it is balya in nature (strengthening) which provides strength to the muscles and nerves that alleviates the symptoms of HMSN.

Neurogenie capsules by Planet Ayurveda consist of the standardized extract of Brahmi (Bacopa monnieri) and Ashwagandha (Withania somnifera). Brahmi (Bacopa monnieri) consists of antioxidant properties that aids in preventing the degeneration of the nerve cells thus restricting the further progress of the disease HMSN. Ashwagandha (Withania somnifera) contains wonderful rejuvenating and strengthening properties that help in managing the symptoms of HMSN such as muscle pain, difficulty in breathing, difficulty in lack of sensation, difficulty while walking, etc.

HMSN is an inherited disorder that is also called as Charcot marie tooth disease which is progressive in nature that includes nerve cell deterioration as the main pathology. . It occurs by the mutation (change) in the Chromosomes 1 and 17. In general the condition occurs due to transfer of defective genes from both the parents. According to Ayurveda HMSN is correlated to beeja dosha, which means the condition occurs with the defect in beejbhaga (sperm and ovum). Progressive muscle wasting, Severe disability, Disturbed gait, Decreased stability, Frequent falls, Difficulty in climbing stairs, Difficulty in walking, in short a person is unable to perform day to day activities. So if you are facing these issues, you must choose ayurveda treatment. It will improve your quality of life and make you better to perform day to day activities. For this purpose Planet Ayurveda is there for you with a miraculous list of herbal remedies, then stop worrying and start taking Ayurvedic medicine to improve your day to day life.