How to Treat Cutaneous Larva Migrans Naturally Through Ayurveda

Skin is one of the organs which is constantly exposed to the external environment and is a common way where parasites can easily enter the body. The infestation of parasites can easily affect the skin resulting in lesions. Parasitic infections are increasing in dermatology due to the rising number of people traveling and immigrating. In Spite of all that clinical features on skin people ignore the signs and this leads to worsening the skin condition. One of these skin conditions caused by the infestation of parasites is Cutaneous Larva Migrans and in this article we are going to discuss this more in detail along with herbal treatment.

What are Cutaneous Larva Migrans?

It is the skin condition found in humans caused by larvae of the various parasites from the hookworm family. These parasites are commonly found in the intestines of animals like cats, dogs etc. This causes creeping eruptions due to its appearance on the skin and is also known colloquially. In the parts of the Southern USA it is also called sandworms because they are commonly found in the sandy soil. The term Cutaneous Larva Migrans means larvae wandering under the skin. They are commonly found in humid or tropical regions and it typically goes without noticed within 4 to 7 weeks but in some cases it might get worse.

What are the signs and symptoms?

Here are some of the common clinical features including

What are the causes for Cutaneous Larva Migrans?

How can Cutaneous Larva Migrans be Diagnosed?

The doctor might ask for traveling history and along with that physical examination might show lesions measuring 2 to 3 mm.

Planet is a Private Limited Company which not only provides herbal medicine in India but also other parts of the world. All the medicines are free from chemicals, preservatives and additives making it free from all kinds of side-effects. Each of them are made under the supervision of an MD Ayurvedic Doctor and tested as well. They not only help in treating the disease but also removing the root cause of the disease. Here is the list of medicine including:- 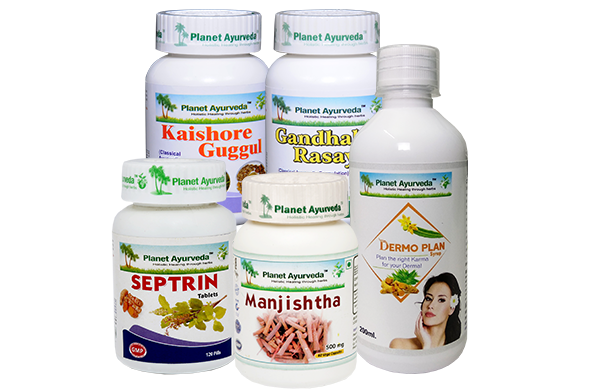 It is made from the extract of herbs like Guggul (Commiphora mukul), Black pepper (Piper nigrum),  Amalaki (Emblica officinalis) etc. It is one of the best herbal medicines for treating and maintaining the health of skin.  It also helps in removing all kinds of parasites from the body and improving the health of the pancreas.

It is one of the best syrup for treating skin disorders made from herbs like Giloy (Tinospora cordifolia), Neem (Azadirachta indica), Khadir (Areca catechu), Shobhanjan (Moringa oleifera)  and many more. All the herbs together help in removing all kinds of skin infestation especially Cutaneous larva migrans. It is effective in purifying the blood and giving it a natural glow to skin.

These capsules are filled with one single herb known as Manjishtha (Rubia cordifolia). It is packed with anti-inflammatory as well as antioxidant properties which helps in reducing all kinds of swelling. It naturally reduces all the rashes and also the levels of blood glucose. It is effective in maintaining the good health of skin both internally as well as externally.

It is well known for enhancing the immunity of skin as it is made from one single herb called Gandhak Rasayan (Purified Sulfur). It is packed with antiviral, antimicrobial as well as antibacterial properties These tablets will help in getting rid of parasites from the skin naturally. It is effective in improving the complexion naturally.

Dosage:-  One tablet twice daily after meals with water.

These tablets are filled with herbs like Sonth (Zingiber officinale), Haldi (Curcuma longa), Marich (Piper nigrum), Tulsi (Ocimum sanctum) etc.  It is one of the effective tablets for improving immunity and also reducing inflammation from skin. It helps in killing bacterial infection and also symptoms like fever, pain or rash.

How can Cutaneous Larva Migrans be Prevented?

Here are some of the few steps that can help in preventing the disease and this includes:-

Contact my assistant to provide you the costing / ordering and delivery information at – costing.planetayurveda@gmail.com or call at +91-172-5214040 Or Check Website – www.PlanetAyurveda.com

Our skin is one of the important organs and should be given first priority.  It is important to maintain good skin health and this parasitic infection might make it bad. All the above mentioned herbal medicine will help in removing cutaneous larva migrans and improving the overall health of skin.

Get Rid of Atopic Dermatitis with Herbal Remedies

Atopic dermatitis is an autoimmune disease which damages the barrier of skin resulting in dry, itchy skin and rashes that appear to be brown, purple, gray or red in color. It is the most common type of eczema which comes and goes on and off in a person for a certain period of time or maybe throughout their life. During its course, if the disease becomes chronic, certain other types of eczema may also overlap the condition. In this write up, we will be getting detailed information about the Atopic dermatitis and best organic herbs offered by Planet Ayurveda to treat it naturally. Atopic dermatitis is one of the types of eczema which is the most common and causes more severe itching and redness of skin as compared to other forms. Exaggerated allergic reaction of the immune system to some allergen results in severe inflammation, itching, rashes, dryness and redness of the skin. Atopic dermatitis has a characteristic of scratch-itch cycle which has both psychological as well as physical components. Itching in atopic dermatitis is so severe that one goes on itching which feels pleasurable at times but causes more inflammation and infection of the skin further. Children and infants are more prone to it; however, several cases of adults are also reported every year worldwide.

The exact causative factor behind the atopic dermatitis is unknown. Though, there are certain factors which seem to play a role in its pathogenesis like abnormal response of the immune system to an allergen as compared to the other persons who are not having atopic dermatitis. Second factor is the altered barriers of the skin which causes skin to dry up too much and make it prone to become dehydrated and infections. All these factors lead to extremely dry, itchy, red skin developing rashes and patches on exposure to certain allergens. There are also certain triggering factors which can initiate the atopic dermatitis in the body like hot water baths or showers for longer time, scratching every now and then, exposure to heat for long, dry, cold weather, allergens like dust, pollen, dirt, sand and smoke. Stress also plays a vital role for the aggravation of this disease and people exposed to physical or mental stress for a long time have been reported to trigger the attack.

There are no laboratory tests used to diagnose the atopic dermatitis. Thorough physical examination by a doctor of the patient’s skin will reveal the possibility of atopic dermatitis. Along with it, knowing the medical history is a favor as this disease is usually seen to run in the families, falling under the category of diseases caused due to heredity. The family history can be of atopic dermatitis, asthma or hay fever. Certain patch tests can also be done to rule out other skin conditions.

Atopic dermatitis is an incurable disease as per orthodox system of medicine and there is no specific treatment for the disease in it. The treatment is only given to suppress the present symptoms like itchy and redness of skin. But it does not help patients much as attacks come on and off and with time, the intensity can also increase. Also, the steroids used in the treatment have harmful effects on the other organs of the body.

Ayurveda has always treated skin ailments very gently and safely. Several skin diseases that are known to be incurable as per modern medicine have been treated successfully in this ancient system of medicine, several times. There are plenty of amazing herbs in Ayurveda whose therapeutic actions have been proved effective and used since ages. Ayurveda is based on the holistic approach for the diseases which not only heals the body but spirit and mind as well.

Planet Ayurveda is the herbal manufacturing unit and has a well-known name in the field of Ayurveda. The speciality is, MD-Ayurveda expert owns and runs it with best of his knowledge to serve the people worldwide. It deals with the production and trade of the purely vegetarian and herbal products and medicines all around the globe. These medicines can be easily accessible online as well as offline in the main Clinic or through the authorized distributors located in different parts of India and the world as well. None of the products contain any kind of preservative, chemicals, fillers, colors, yeast or dye which make them extra safe and effective. For Atopic dermatitis, Planet Ayurveda offers a combination called “Atopic Dermatitis Care Pack.” All the remedies in this pack consist of potential herbs which have therapeutic action on the skin and help to manage and treat atopic dermatitis successfully. This herbal churna helps in eliminating the toxins from the blood, cleanses skin and corrects the vitiated Vata and Pitta dosha. Navkarshik churna also works as an immunomodulator and treats the abnormal exaggerated immune responses of the body which is considered as the root cause of the disease. It is prepared from Amla (Emblica officinalis), Haritaki (Terminalia chebula), Bahera (Terminalia bellerica), Vacha (Acorus calamus), Neem (Azadirachta indica), etc.

These therapeutic tablets support healthy skin and prevent the accumulation of unwanted substances in it. Gandhak rasayan is a well-known remedy for several kinds of skin diseases like atopic dermatitis, scabies, ringworms, etc. It is prepared from Shuddha gandhak (Purified sulphur) which cleanses the blood and skin and eliminates toxins from the body.

It helps in treating various types of eczema like atopic dermatitis. Lippu oil is composed of Coconut palm (Oleum cocos nucifera) and Indian beech (Pongamia pinnata). This oil is used by applying on the affected area locally. It relieves itching, inflammation and also hydrates the skin.

It is a classical Ayurvedic preparation which helps to relieve skin ailments like eczema and psoriasis. Herbs like Stri kutaja (Wrightia tinctoria), Coconut (Cocos nucifera L.) oil are used in Vetpalai thailam. This oil helps in killing microbes, checking infections, and improves the quality of the skin.

Direction– Take few drops of oil and apply with fingertips on the affected area externally.

Using this natural organic soap is really good for skin as it does not contain any kind of chemicals. Mandarin orange soap soothes the skin and prevents it from drying and itching by trapping natural moisture of it. It also replenishes the deficient minerals in the skin. This soap is prepared majorly from the extracts of orange and mandarin. It can also be used by a healthy person for maintaining healthy and glowing skin.

Direction– Use daily for bathing and twice for washing the affected area.

Atopic dermatitis can be treated well with the help of herbal remedies. These remedies not only eliminate the disease but also restore the healthy structure and function of skin along with restoring the normal function of the immune system.