Ovarian cysts are non-cancerous and have a sac like structure that can be filled with fluid, pus or other gaseous material, they are common and can occur anywhere on the body.  The diagnosis of ovarian cysts has increased with the extensive use of ultrasound technology, MRI and CT scan. The treatment of an ovarian cysts is mainly done by hormonal treatment (combined oral contraceptive pills) and by surgical treatment such as pelvic laparoscopy and laparotomy which are having their side effects but in Ayurveda, ovarian cysts can be co-related with Kaphajagranthi.  Some ovarian cysts cause problems such as per-vaginal bleeding and pain in pelvis. Ovarian cysts frequently require surgical treatment but immense challenge persists to manage with medicines.

Ovarian cysts according to Ayurveda

Ayurveda is an ancient Indian system which involves natural and holistic treatment. Ayurveda means “the science of life”. In Ayurveda, cysts are co-related with “Granthi”.According to Ayurveda, menstrual cycle in females is regulated by Apana vayu or Prana-vyana-apana axis (endocrine imbalances in relation to ovarian cysts) and the fertility depends on the balance of Vayu in the lower abdomen which is known as “Apana Vayu”. Ovarian cysts according to Ayurveda may be though in the lines of Kapha blocking the functions of Apana Vata.

This mostly happens in 2 cases

In these conditions Kapha which is usually present in the upper part of the body drips down through the middle part of the body, which is Pitta place (Agni sthana), while doing so Kapha drags Pitta too as it moves into Vata sthana. Due to this, there is an accumulation of fluids in the lower portion of the body which causes cysts. When this happens, the Prana-Vyana-Apana axis is disturbed because they are also subjected to unnecessary and undesired displacements. In this condition, Ayurvedic treatment is concentrated on correcting Prana-Vyana-Apana axis.

What are the symptoms of ovarian cysts?

There are many herbal supplements for ovarian cysts which are safe, effective without having any side effects as these herbal remedies work slow and steady and do not cause fluctuation in the hormones. These herbal remedies of Planet Ayurveda show their results within 4-8 weeks. 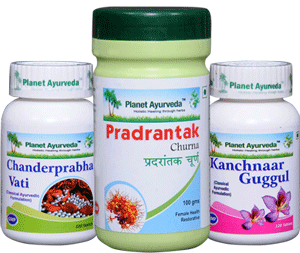 This product of Planet Ayurveda is one of the best herbal medicine for treating ovarian cysts and various other female health problems like- pre-menstrual syndrome (PMS), uterine fibroids, ovarian cysts as this herbal product is a complete herbal formulation to take care of all female health problems. This herbal powder is a slight modification of classical Ayurvedic “Pushyanug Churna”.

1-2 teaspoonful twice daily with water, juice or iced tea after meals. It can be taken for long time as it has no side effects.

It is one of the very efficient Ayurvedic herbal medicine. Its reference is found in Bhaishjya Ratnavali, 44th

The bark of this tree has been found to be useful in blockages in lymphatic channels and found to be very effective in tumors of all kinds. It is also useful in uterine fibroids and ovarian cysts. The main ingredients of Kanchnaar Guggal is Kanchnaar and Guggal. Other herbs like Triphala and other spices is a combination of hot herbs useful for generation heat and also improves the penetration of the medicine into the cells and the system.

2-5 tablets with plain water after meals.

Chanderprabha vati is an ancient remedy dating back to 1300 A.D. and was described for the first time in ancient Ayurvedic text Sharangdhar Samhita(M.kh-7)

Chanderprabha vati is quite beneficial in ovarian cysts, fibroid s shrinkage and in many other diseases.

2 tablets twice a day with plain water after meals.