The trend of genetic diseases is increasing nowadays. One of such conditions is Galloway mowat syndrome. This is an extremely rare congenital disorder which is manifested by a variety of physical & neurological abnormalities along with an early onset of a series of renal disorders. In this article we’ll discuss the causes, symptoms, of this syndrome along with the Ayurvedic aspect & line of management of the disease with best Ayurvedic formulations. 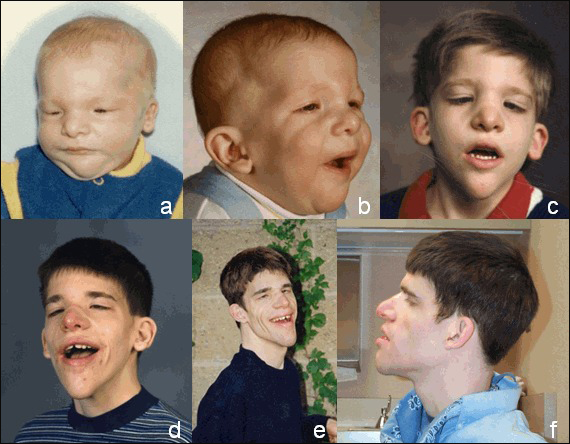 Galloway mowat syndrome is a neurodegenerative autosomal recessive condition present since birth and characterised by the variety of features including triad of microcephaly (when the newborn baby’s head is very smaller than the normal), hiatal hernia (a condition when the part of stomach bulges through the diaphragm in the chest cavity) along with nephrotic syndrome (multiple kidney related issues).

Galloway-Mowat syndrome appears to be genetically inheritable and is considered to be transmitted in an autosomal recessive fashion of inheritance, which means the defective gene for the syndrome is located on autosome and the both copies of genes (one from each parent) are necessary for the disorder’s manifestation. The individual/ parent who carries one of the mutated autosomes will not show any kind of sign & symptoms related to the disorder.

Multiple genes (10 genes) are believed to be the causative factors for the clinical manifestation of this syndrome, in which the significant cases have been shown to be caused by biallelic mutations in the WDR73 gene.

One gene, LAGE3, is associated with X-linked inheritance of Galloway Mowat syndrome.

The cardinal features of this disorder as discussed above are

Other clinical features include:

Acharya Charaka and mentioned the various congenital deformities that may be produced due to mutation in genes by following phrase:

Garbhoutpadak beej (sperm & ovum) and beej bhag (genes/chromosomes linked encoded within the sperm/ovum) are the basic ingredient for the formation of various tissues & organs, any kind of deformity (mutation) at the level of genes (beej bhag) will be responsible for the disorders related to that particular organs & organ systems.

The line of treatment for the disease include:

Planet Ayurveda is the best herbal formulating company that makes products which are in strict adherence to the Ayurvedic principles and formulations as suggested by our acharyas in that ancient time hundreds of decade back. The herbs & minerals used for the formulation of various medicines are obtained from 100% natural sources. These are then duly processes, purified and formulated according to ancient time tested formulas under the guidance of our expert ayurvedic physicians.

Best herbal remedies as suggested by Planet Ayurveda for this Galloway mowat syndrome are: 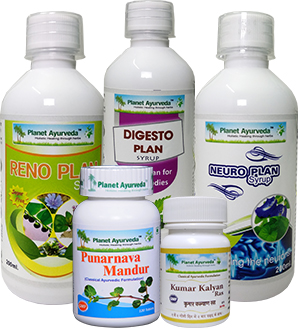 Punarnava Mandur is a classical preparation available in tablet form. The main ingredient here is Punarnava (Boerhavia diffusa) which is the best single drug for kidney, beneficial in improving kidney functions by providing strength to the kidney muscles. Along with it it also contains trikatu (combination of three pungent drugs i.e. Piper nigrum, Piper longum & Zingiber officinale) and mandur (detoxified iron ore) which collectively act as blood purifiers and help in the formation of new blood cells. Thus, reducing the load on the kidney this formulation helps in Galloway Mowat Syndrome.

Dosage: 1 tablet twice daily after feeding. (to be crushed well and then used with Reno Plan syrup)

Reno Plan Syrup is the herbal syrup made by our team experts by combining the goodness of many herbs that promotes the kidney functions. The main ingredients of this syrup includes Punarnava, gokshura (Tribulus terrestris) and varun (Crataeva nurvala) which are the best herbal diuretics and are useful in preventing or treating various urinary tract infections. The distorted renal functions in this syndrome are well managed by the ingredient trin panchmool ghan vati which is an ayurvedic formulation made using 5 roots of grasses that are mutravirechak in action. The other ingredients such as Kalmegha (Andrographis paniculata), kaasni (Cichorium intybus) etc. aids in scavenging the free radicals by their antioxidant properties.

Kumar Kalyan Ras is the herbomineral compound which is described in the ancient Ayurvedic texts. This preparation is used in Galloway Mowat Syndrome due to the dhatu poshak (nourishing action on depleted bodily tissues) action of its ingredients. The ingredients of Kumar Kalyan Ras include swarna bhasma (purified ash of gold), abhrak bhasma (purified and processed ash of mica), shuddha parada (purified form of mercury), mukta bhasma (calx of pearl), loha bhasma (purified ash of iron) and makshika bhasma (purified extract of copper – iron pyrite) along with Kumari Rasa (Aloe vera’s juice extract). These calx of purified minerals are well efficient to reach upto the cellular level and nourish the various body tissues. Along with aloe vera which also facilitates in enhancing the immune system & maintaining hormonal balance.

Dosage: One tablet daily (to be chewed or crushed & used with syrup), after feeding.

Neuro Plan Syrup is the amazing poly herbal syrup made on the guidance of our expert team for the various neurological disorders. The herbs used in the syrup aids in calming the mental dosha i.e. raja & tama dosha. In this case i.e. Galloway mowat Syndrome is a neurodegenerative disorder in which there is a gradual decrease in neurological functions. Neuro Plan syrup’s ingredients such as Brahmi (Bacopa monnieri), Jyotishmati (Celastrus paniculatus), Mandukaparni (Centella asiatica) and Shankhpushpi (Convolvulus pluricaulis) etc. are the best medhya dravya (nervine tonics) and they strengthen the nervous system and also make the internal environment favourable for the proper functioning of brain & brain cells.

Digesto Plan Syrup is the best herbal remedy for digestive issues & providing strength to abdominal musculature. In this case the major manifestation also includes hiatal hernia. So, this syrup will support the digestion of the baby & aiding in strengthening the muscles of the abdomen to prevent hernia from proceeding further. The ingredients include trikatu (Sonth, Maricha, Pippali) along with triphala i.e. combination of three fruits amalaki (Embilica officinalis), bibhitaki (Terminalia bellirica) and haritaki (Terminalia chebula) and other such herbs will make the digestion faster and also promote the cleansing action which will decrease the excessive  load or distension of the abdomen, which will prevent the hernia to pop out more further. Despite that it promotes the healing of hernia side by side by providing strength to those muscles.

It is very unlucky to have such a rare neurodegenerative disorder that affects multiple systems of the body. Despite giving steroids to the young child at very early stages of life which have tons of adverse effects in the later stages of life, use of such herbal based medicines is the best alternative for Galloway Mowat syndrome. For more information kindly visit www.PlanetAyurveda.com