Top 7 Herbs for Cancer in Ayurveda 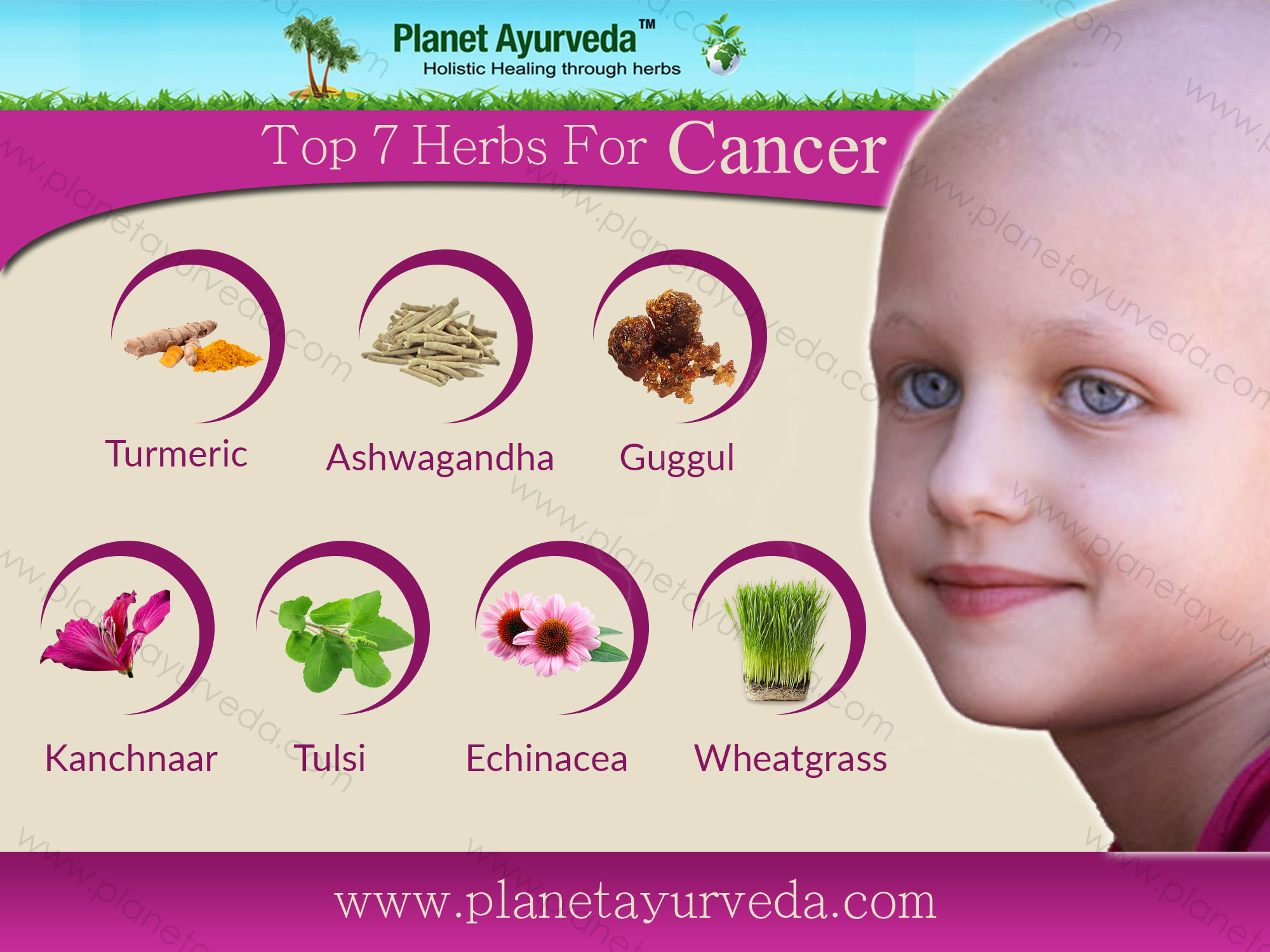 According to Lab Results, Curcumin Helps in

According to ayurveda Ashwagandha is one of the excellent herb used for its amazing anti-oxidant properties. Due to its anti-oxidant properties, it protects normal body from cancer. It helps to improve the patient’s condition who are already suffering from cancer and are undergoing radiotherapy or chemo therapy. It also minimizes the damage of the healthy cells from these harmful therapies. Severe imbalance between the three body energies lead to development of cancer. By increasing overall survival time, it reduces tumor cell proliferation. Ashwagandha acts as a chemotherapeutic agent as well as radio sensitizer. It is very effective in brain cancer, prostate cancer, renal cancer, skin cancer, breast cancer. It helps in regeneration and rapid recovery of the tissues of the body. Ashwagandha is also available in form of capsules which are safe, effective and 100% natural.

Guggul is the resinous plant extract of Commiphora mukul which has great anti-oxidant and anti-inflammatory properties. The site of cancer growth has an immense inflammatory action in progress due to the rapid breakdown of the body tissues and a haywire metabolism that is fueling the irregular growth of the cancer cells.

It has a free radical scavenging activity which decreases the chances of development of cancer to a large extent. It is helpful in treating polycystic ovarian syndrome, benign prostate hypertrophy, tumor and cancer. Guggul [commiphora mukul] is also available in the form of capsules. It helps in revitalizing cells and then rejuvenating them.

Kanchnaar is a very useful medicinal plant with the Latin name Bauhinia variegata.Since ancient times, Bauhinia variegate is a very effective herb that is in use for its excellent benefits in managing glandular growths and soft tissue malformations. A very popular classical Ayurveda preparation kanchnaar which is used in the treatment of all kinds of tumors and cancers. Tumors and cancers usually have an imbalance of the kapha body energy which is balanced by the piercing action of Kanchnaar extracts. Kanchnaar guggal is composed of kachnaar bark, amalaki, bibhitaki, ginger, black pepper, varuna.

Tulsi is the most sacred herb in the India. Tulsi is one of the excellent immune-modulators and is one of the preferred herb in the Ayurvedic treatment of cancer. It is a COX – 2 inhibitor which suppresses inflammation and helps in treatment of severe pain which is a common feature in cancer patients. Holy basil cells fight and destroy against pre – cancerous changes in the cells and the potential to repair damaged cells. Eugenol [the active component of the leaves of holy basil] inhibits the division and migration of the cancer cells. It also prevents the cancer cells from invading into the surrounding structures and induces the process of programmed cell death called as apoptosis. Tulsi is also available in the form of capsules which are very effective in treatment of such cancer.

Echinacea is also called as Andrographis panniculata and is excellent herbal medicinal plant which helps in fighting cancer in humans as well as in boosting immunity. It is also a great natural anti – oxidant. It helps to fight against infections of all kinds and boosts body’s natural ability to fight against cancer. Its analgesic and Fibrinolytic properties making it useful in managing cancer patients who are undergoing radiotherapy or chemotherapy. With regular usage of this herb, precancerous changes can easily avoided and cancer patients can easily survive with effective management of the adverse side effects that these patients suffer from due to chemotherapeutic drugs and radiations. According to some studies, this extract helps in breast cancer, Non-Hodgkin’s lymphoma and prostate cancer.

Wheatgrass is obtained from our very own source of staple food known as wheat or Triticum aestivum.Its great medicinal benefits help in the prevention of the diseases such as leukemia, cancer etc. The chlorophyll content of wheatgrass is effective in the treatment of hemoglobin deficiency which is one of the most common problem in cancer patients. It is the source of an enzyme superoxide – dismutase which acts as a best scavenger for free radicals. It is also said that wheatgrass juice charged with ultraviolet rays become all the more effective in the treatment of cancer. Wheatgrass is also available as an herbal supplement in the powdered form which is for all types of cancer.