Skin diseases are something that pushes down our self-confidence and brings about embarrassment most of the time. For the majority of people, beauty is always on top of mind and is ready to invest anything and everything over it. Here, Ayurveda comes as a rescuer with its plethora of remedies for every skin problem from mild to severe. In Ayurveda, most of the skin diseases come under the context of ‘kushtaroga’ and ‘kshudraroga’ while many others are randomly included under appropriate titles. Some people consider ‘Kushta’ (skin disease) as Leprosy which is not the correct correlation. A wide range of Ayurvedic Herbs is available that focus on skin health without any downsides. Now, let us see the action of some of those herbs on our skin.

According to Ayurveda, vitiation of ‘tridoshas(vata, pitta and kapha) along with impairment in skin, blood, lymph and muscle tissues occurs in skin disorders. Charakasamhitha has prioritized certain group of drugs for particular disorders of the body. Among these classification, the categories which gives promising results in skin problems generally are the.

Further to this, the drug with emetic and purgatory effects in the body also yields definitive effects in dermatology when used selectively according to the predominant dosha and several other factors 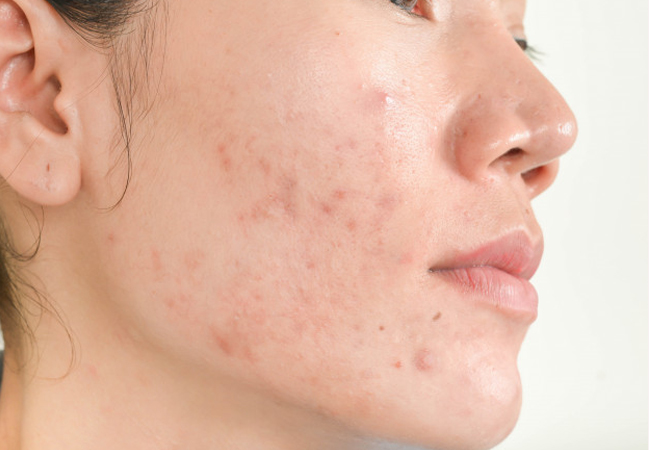 Kushtagnagana are the most important group of ten herbs that are described solely for skin ailments.

Most of these drugs are either bitter or astringent in taste and cold in nature leaving out saptaparna and Arushkara. In addition, they are light, clear and dry thereby having potent effect on skin, blood, liver etc. With these qualities they help in blood purification and removal of toxins from the body. Also they promote a healthy complexion. Being in kushtagnagana, these drugs possess qualities like anti-inflammatory, anti-pruritic, complexion enhancing, anti-parasitic etc which makes them the most suitable for skin diseases.

Khadira is the most relevant drug for almost any skin conditions. It mainly helps in balancing the kapha and pitta dosha. It is used both externally and internally. Apart from having all the properties of kushtagna drugs, it is also switragna (provides relief from leucoderma), vranaropana (wound healing), and rasayana (rejuvenating).

Another list of drugs mentioned by Acharya Charaka is the varnyagana that comprises of herbs which nourishes the bhrajaka pitta (type of pitta dosha) present in the skin. They are

These endows wholesome complexion and neutralizes irregular pigmentations on the skin. Therefore, they can be utilised in reducing dark spots, scars, melasma etc. Most of them are cooling and soothing to the skin and act as blood purifiers. Hence they provide relief in burning sensation, blisters, acne etc.

The kandughna gana consists of herbs that help in relieving pruritis or itching. They are namely

They are mainly used in those dermatological issues where itching is the main complaint. They pacify mainly kapha and pitta dosha. Some of them act as coolants while others are hot in potency. Hence, owing to their pharmacology, suitable drugs are selected based on the dosha predominance.

Moving on to the udardaprasamana gana it involves drugs that are efficient to be anti-allergic and hence used in conditions like urticaria, dermatosis etc. They are Tinduka

Most of them possess anti-histaminic and revitalizing effects. They act predominantly on the rasa and rakta dhatus. These purify the blood and also do immune-modulation. Besides, they have lekhaniya property (scrapes off excess kapha dosha). Furthermore, these drugs have the ability to manage the boils and blisters erupting on the skin.

Skin diseases may also manifest due to micro- organisms (krimi) and poisonous bites or food items. Charaka samhitha specifies the krimighna and vishaghna group of drugs for this purpose respectively. The herbs belonging to krimighna gana involves

Apart from performing the deworming action, it subsides certain skin infestations too. ‘Vidangam krimighnanam’ which implies that vidanga is the most powerful drug for parasites and worms. The combination of vidanga, silajathu and khadira along with honey and ghee shows its efficacy in psoriasis, leukoderma and eczema.

The vishaghna gana are the ten drugs that have the potential ability to remove toxic effects from the body. The group is composed of herbs like

Internal as well as external applications are carried out. Any kind of toxicity, say, food contamination, cosmetic poisoning, drug toxicity or organ related poisoning can be combated through these anti-toxic drugs with its felicitous usage. Selective and suitable combinations of these drugs can be used for skin ailments occurring as a result of noxious environment

Alongside this, Ayurveda explores abundant other herbs which are capable of producing a positive impact on the structure and function of skin. The herbs mentioned here are used bothin acuteand chronic skin conditions along with pathy ahara and vihara (proper diet and regimen). In chronic skin diseases Ayurveda generally emphasizes on emetic therapy to be done on every fortnight, purgation therapy on every third day and blood-letting therapy for every six months according to the stage and condition of the patient.

Along with this these herbs and herbal combinations are used internally and externally and the skin complaints can be managed to a large extent without any further recurrence. The most important fact to remember is that instead of leaning on to medicines it is equally crucial to get adapted to healthy food habits and lifestyle. As only half part can be done through medicines, the rest half depends on ourselves.