How Can Phimosis Be Managed In Ayurveda With Herbal Remedies?

Phimosis is a condition in which the foreskin is too tight to be pulled back over the head or glans of the penis. It is the part of male reproductive organ which is located outside the body, external organs include penis, scrotum, testicles. The internal organs include vas deferens, prostate and urethra. It is mainly responsible for sexual functions and urination. The main function is to produce, maintain and transport the sperms. They discharge sperm into the female reproductive tract and secretes male sex hormone. These hormones are the chemicals which stimulate and regulate the activity of the cells which are involved in the functioning of the male reproductive system, the main hormones which are involved are follicle stimulating hormone (FSH), Luteinizing hormone (LH). These hormones are mainly produced by the pituitary gland which is located on the base of the brain and is responsible for functioning of the body. FSH is responsible for spermatogenesis, LH is responsible for production of testosterone which is important for development of male characteristics includes fat distribution, bone mass, sex drive. Penis is the main organ which is responsible for the sexual intercourse and has three parts which includes- the root, body and the glans. The glans is a cone shaped part which is covered by foreskin and the skin is removed known as circumcision. This is the part which is not retracted and seen in phimosis. In this topic we are going to study in detail about its causes, treatment and its ayurvedic management in detail. 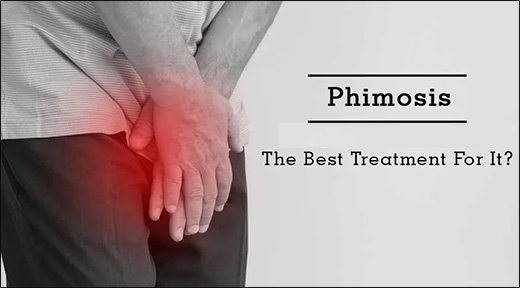 Phimosis is a condition of the penis that is seen in some adults and childrens whose glans is not circumcised. In this the foreskin cannot be retracted from the tip of the penis, can occur naturally or be the result of scarring. A balloon-like swelling is seen under the foreskin which occurs during urination. In teenagers and in adults it may cause pain during erection and those who are affected are at greater risk of the inflammation of the glans which is known as Balanitis. In childrens the condition can be normal and 90% cases can be prevented by preputial adhesions. The main complication arriving due to this condition is scarring which is due to balanitis and balanitis xerotica obliterans (BXO). It is found virtually in all newborns and 1% seen at 16 years of age. BXO is an insidious onset which causes irritation, local infection, bleeding and sometimes meatal stenosis. Glans is a sensitive bulbous structure which is at the distal end of the penis.

In physiological phimosis, the attempted retraction of foreskin results in constriction ring which is proximal to preputial orifice. In BXO it has sclerotic constricting band which is 1 to 2 cm proximal to distal end which whitish discoloration of peri meatal area and an erythematous area being a sign of developing disease.

There is 6 grades of phimosis such as –

Physiologic phimosis is common in males at the age of 10 years which doesn’t require any intervention. Non retractile foreskin becomes retractable during puberty. If phimosis is seen in older and in adults it doesn’t cause any severe problems so non surgical measures are effective.

It can range from complete removal of the foreskin to minor operation.

The most acute complication is paraphimosis, in this gland is swollen and painful, the foreskin is immobilized by swelling in a retracted position. Further it can be a risk factor of urinary retention and carcinoma of penis.

In ayurveda phimosis is related to Nirudhpraksh. It is also known as nirudhmnai. Acharya Sushruta gave brief knowledge about this disease as it is mainly due to Atimardan (excessive rubbing), Peedan (pressing) and Abhighatadi (trauma) which causes vitiation of the vata doshas which get localized to glans (mani) and prepuce (shishangra twacha) which furthur produces adhesions causes obstructions in the passage of the urine, and sometimes characterized by thin stream of urine without excessive pain and glans cannot be exposed.

Ashwagandha (Withania somnifera) is a powerful gift of ayurveda used in the treatment of anxiety, muscle strength, and acts as an antioxidant. Ashwagandha is associated with male and its fertility and useful in females too. This herb is used to strengthen the uterus, ovaries and its ligament to prepare for pregnancy. It works as a powerful antioxidant (boosts up the immune system) and anti-inflammatory. Helps to improve the quality of ovum (egg), reduces the stress level and calms the mind and helps to manage hormonal disturbances.

Shilajit (Asphaltum punjabinum) is a dark sticky mineral substance which has powerful rejuvenating properties and helps to support the immune system of the body, acting as an anti aging. It initiates detoxification and removes the excess kapha which helps to maintain healthy weight, promotes healthy health to lungs and respiratory tract. Helps to maintain energy, vitality and provides tone to the reproductive system.

Gokshura (Tribulus terrestris) is an ancient herb used mainly for bodybuilding, relieves disease of the urogenital system and acts as an aphrodisiac. It helps to improve muscle strength, acts as a diuretic which cleanses the urinary system and has lithotriptic activity. Gokshura helps to increase the libido in both men and women, promotes sperm production and ovulation. It acts as an anti-inflammatory property and is used in the treatment of anti obesity.

Turmeric (Curcuma longa) is used in the treatment of diabetes and mainly balances tridoshas of the body. It acts as a blood purifier which is commonly used in the treatment of atherosclerosis, removes the toxins from the vessels and expels extra kapha and medha from the body. It has an anti-inflammatory property which is helpful to rejuvenate skin tone, act as antibacterial and as antioxidants.

Planet Ayurveda is a famous herbal pharmaceutical company that deals with the production of herbal products and various remedies for treating various kinds of ailments without causing any side effects to the patient. All the formulations prepared by planet Ayurveda are 100% pure which is made from plant extracts. For the treatment of phimosis planet ayurveda provided many herbal remedies which provides great relief to patients. 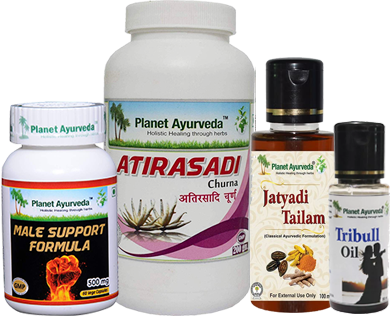 Male support capsules are polyherbal capsules formulated by planet ayurveda using ingredients such as Ashwagandha (Withania somnifera), Shilajit (Black bitumen), Gokshura (Tribulus terrestris). These capsules act as the best aphrodisiac which helps to promote and strengthen the male reproductive organ. It helps to increase the flow of blood to penis and enhances the fast removal of toxins which helps to prevent infection and inflammation. Helps to remove the obstruction of urine due to phimosis.

Atirasadi Churna is a polyherbal churna which is formulated by planet ayurveda using ingredients such as Safed Musli (Chlorophytum borivilianum), Shatavari (Asparagus racemosus), Akarkara (Anacyclus pyrethrum), Varahi Kand (Dioscorea tuberosa) and many more. This churna helps to improve male reproductive system and is effective in premature ejaculation and in erectile dysfunction. This churna helps to pacify the vata dosha, balances pitta dosha and nourishes kapha dosha.

This is classical herbal oil which is formulated by planet ayurveda using ingredient such as Chameli (Jasminum officinale), Patola patra (Stereospermum chelonoides), Katuki (Picrorhiza kurroa) and many more. It has penetrating property which helps to heal the deep seated wounds and in non healing wounds. It helps to restore the normal color and reduces the sensation of the affected area.

Method Of Application: Jatyadi oil is mixed with Tribull Oil and is applied over the affected area and massages it gently daily.

Phimosis is a condition in which the foreskin is too tight to be pulled back over the head or glans of the penis. It is the part of mae reproductive organ which is located outside the body, external organs include penis, scrotum, testicles. The internal organs include vas deferens, prostate and urethra. The main hormones which are involved are follicle stimulating hormone (FSH), Luteinizing hormone (LH). A balloon-like swelling is seen under the foreskin which occurs during urination. The main complication arriving due to this condition is scarring which is due to balanitis and balanitis xerotica obliterans (BXO). As we discussed there many herbal remedies which are formulated by planet ayurveda and it provided great relief to patients without causing any side effects.