Large intestine is the last and an important part of our gastrointestinal tract. This part is responsible for the water absorption, formation & storage of faeces before defecation. It consists of 3 parts namely caecum, colon & rectum. Rectum is the end part of the large bowel which end up in anal canal, which is the end segment of GI tract that open up through anus. Sometimes, there is an abnormal growth of epithelial tissue at the mucosal level of rectum. These glandular overgrowth of rectal linings are known as rectal polyps. Rectal polyps are one of the most common diseases affecting the large bowel. Let’s discuss these in this article, having some Ayurvedic view of the disease & how to treat them according to Ayurveda.

Rectal polyps are the non-malignant tumors that are sessile, flat or pedunculated (the polyp having a stalk). Mostly these polyps are symptomless and may never change to cancerous ones. However, a few polyps can gradually develop rectal cancer in approximately 8-10 years. Rectal polyps are almost the basic cause of all rectal carcinomas. This condition is best correlated with Malashyagat Granthyarbud, which means the arbud (tumor) that may have originated from granthi (glandular swelling) in malashaya i.e. the rectal region. 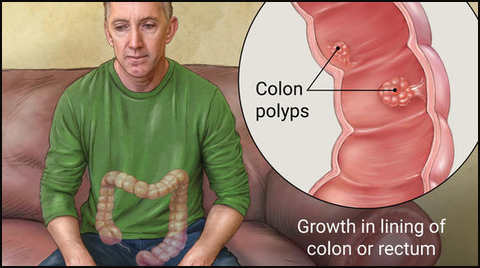 Rectal polyps is generally an asymptomatic condition. But in some cases it may show some manifestations such as:
Local clinical features include

These local symptoms may lead to systemic features such as:

There is no exact cause of these polyps. However, some risk factors considered for the disease are<

Diseases such as inflammatory bowel disease that include Ulcerative Colitis and Crohn’s disease may increase the probability of the disease.

In Ayurveda, Mandagni (decreased digestive power) is considered as the basic cause of all the diseases. Mandagni in turn causes improper digestion of food which leads to the formation of Ama. This ama (endotoxins) travels in the whole body through the bloodstream or as undigested food. When these toxins reach the rectal region they will cause vitiation of tridosha which will end up in the formation of granthi (swelling) which is ultimately converted into arbud (tumors) which is relatable with Rectal polyp. The general features of Arbud as mentioned by Acharya in Sushruta Sutra 11/12-14 are

After consumption of various Nidana the vitiated Vata etc. three dosha will travel in whole body and may violate the Mans dhatu that results in the formation of round, stable, less painful, may big in size, broad based, slow growing, without suppuration a collection of cells (swelling) is created which is known as tumor.
Here, in this case, the basic nidana is Ama i.e. endotoxins that are produced due to mandagni, the mans dhatu refers to the lining of rectal region and the tumor thus, formed is Malashyagat granthyarbud i.e. Rectal polyp.

As rectal polyps are basically precancerous lesions, the timely diagnosis of these are of great importance. The investigations required for diagnosis other than the patient’s history & clinical features are:

Treatment protocol for rectal polyp is as follows:

Nidana parivarjan means that the possible causative & risk factors must be avoided.

Shodhan Chikitsa including Basti, specifically Lekhan basti, are useful in this condition. Also, Anuvasan basti with jatyadi taila is beneficial in these conditions.

Planet Ayurveda is an herbal manufacturing company that makes medicinal formulation with strict adherence to ayurveda. The products which are made here are obtained from 100% natural sources and are well processed, purified and then formulated according to the ancient time tested formulas.

Herbal remedies as suggested by our doctors’ for rectal polyps: 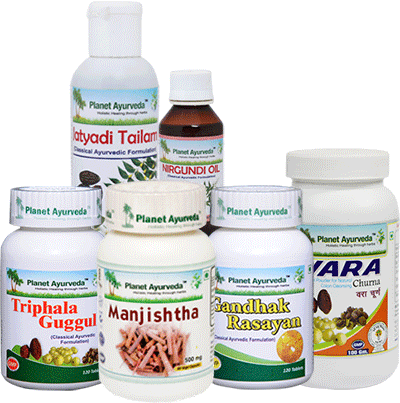 Triphala guggul is the best classical formulation for the various rectal disorders. As it acts as a stool softener due to the triphala i.e. Teminilila cheula (Haritaki), Terminilia bellerica and Emblica officinalis (amalaki), and the guggul (Commiphora mukul) acts as an analgesic i.e. supports in reducing pain. The softened stool does not cause much irritation to the polyps and thus prevents bleeding & pain from it.

This is basically Triphala churna. It contains the three herbs as mentioned in the above formulation. This is available in powdered form and the drugs in powdered form are easily absorbed and have a quick and effective line of action. This product acts as a best laxative that is helpful in cleaning the colon & rectum.

Dosage: 1 teaspoon two times a day after a meal.

The standardized extract of manjistha (Rubia cordifolia) is available in capsule form. Manjistha is described by Acharya Charka in Rakt shodhak mahakshay. It has been a well-known blood purifier since ages. As mentioned in this article, the bloodstream carries the endotoxins to the lining of rectum which is responsible for disease production. Thus, purification of blood will aid in reducing the effect of the disease and preventing further increase of the polyp.

Gandhak rasayan is the best classical medicine having many antioxidants which have a major role in rejuvenating. It is a single mineral formulation made from purified Sulphur. This drug also along with manjistha aids in cleansing the blood & balancing the agni & pitta dosha. Thus, it acts beneficial in the rectal polyp by reducing episodes of bleeding & mucus discharge. The medicine also has a rejuvenating action which supports faster healing of the disease.

Jatyadi taila is a classical herbal preparation in oil form. It is full of herbs that promote the faster healing of the mucosa. This oil contains many herbs such as Chameli (Jasminum officinalae), Neem (Azadirachta indica) and 17 other drugs which are prepared in til taila (Sesamum indicum). These all herbs have a cumulative rapid recovery action.

Nirgundi oil is the best for painful conditions of rectal polyp as the ingredient i.e. Nirgundi (Vitex negundo) is considered as the best analgesic and anti-inflammatory. These both Jatyadi taila & Nirgundi taila due to their lubricating action facilitate the easy passage of stool thus preventing painful defecation & rectal bleeding.

Method of application: Mix both jatyadi & nirgundi oils. Heat the mixture a little and then apply it locally twice daily.

Ayurveda despite being an ancient Science is very much effective & having comparatively less side effects to these types of modern lifestyle & dietary disturbances. Most of the people thought that the surgical removal of the polyp was the best & most effective way of treating them. But they are not right as due to the high rate of recurrence these appear back as he/she continued to consume the nidans. Therefore, early detection & timely herbal treatment with Ayurvedic formulation is the best option to prevent its later complications, i.e. rectal cancer. In case of any query kindly visit www.PlanetAyurveda.com