Psoriasis is an inflammatory skin condition which is characterized by the appearance of silvery scales or fish scale-like plaques on the skin. The thick, scaly plaques characterizing Psoriasis are caused by the excessive and rapid growth of skin cells.

Psoriasis is a chronic skin disease involving eruptions of superficial papules and big patches with phenomena of chronic inflammation. The condition also generally causes the dryness of skin as well as persistent itching. In some cases, the itching is so severe that Psoriasis patients have blood oozing out of the affected skin, which is often accompanied by pus and secondary infections. 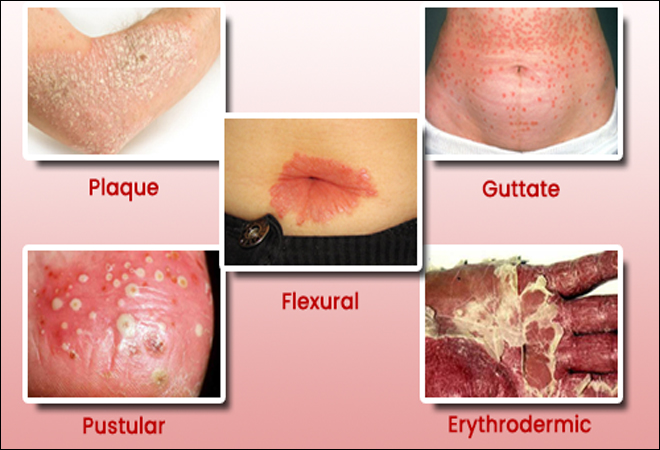 In people affected by Psoriasis, the thick, scaly plaques or lesions generally occur first on the elbows, scalp, knees, and lower limbs, and subsequently spread to all parts of the body. The disease, however, is not contagious.

The reason behind the occurrence of Psoriasis is that new skin cells are produced at a faster rate than the cells which die or are lost. The over-production of new skin cells results in excessively thickened skin. The common factors which can cause Psoriasis are genetic factors, viral/bacterial infections, antidepressants and some other medications, local and systemic trauma, cold climate, withdrawal of systemic steroids, physical/emotional stress, obesity, alcohol consumption, problems with the immune system, and sunburn or lack of sunlight.

Psoriasis typically goes through cycles of relapses and remissions. The condition can lead to a kind of complication called Psoriatic Arthritis, in which the patients experience joint discomfort, swelling, throbbing, or stiffness.

According to Ayurveda, Psoriasis can be classified as a ‘Kushtha’ health condition. It is considered a chronic condition that is intractable (Krucchasadhya) and incurable (Asadhya).

Ayurvedic experts believe that the occurrence of Psoriasis is a result of the imbalance of two ‘doshas’ or areas of energies, namely, the Vata dosha and the Kaphadosha. The imbalance of the two doshas normally results from irregular eating habits, the consumption of wrong foods, controlling natural urges, exposure to severe climatic conditions, and the intake of tobacco and alcohol.

The treatment of Psoriasis in Ayurveda is aimed at the detoxification of the body or elimination of toxins from the body fluids.

Psoriasis can be treated safely and effectively with the help of Yoga. Since Psoriasis can be triggered by emotional and physical stress, Yoga is beneficial for Psoriasis patients because Yoga is a stress-buster through physical exertion and meditative reflection, along with deep breathing techniques like ‘Pranayama. 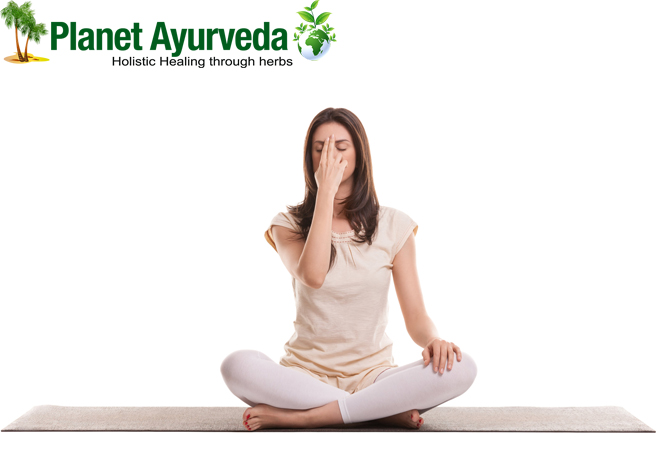 The Pranayama techniques that can be beneficial for the treatment of Psoriasis include the following techniques:

This breathing technique can calm the mind, purify the blood, and clear blocked energy channels called nadis. Hence, the regular practice of this technique is beneficial in managing skin problems and giving a natural glow to the facial skin.

This ‘inhalation and exhalation’ breathing practice can manage skin diseases and lead to soft, supple and glowing skin. The benefit of this breathing exercise is that it can eliminate toxins from the body and clear sinus.

This is a powerful and energetic Pranayama which involves exhalation of breath in such a way that air is forced out in short and quick breaths. This Pranayama technique can improve the circulation of blood and lead to better oxygenation in the facial parts.

Besides Pranayama, another safe and effective Ayurvedic treatment for Psoriasis is the use of some well-known herbs which have proven abilities to manage skin disorders.

Some of the Ayurvedic herbs which can be useful for treating Psoriasis are:

Turmeric or ‘haldi’ is a common household spice that is known for its anti-inflammatory and antibacterial and properties. The herb — available in the form of capsules or dietary supplement — has the ability to relieve inflammation and pain associated with Psoriasis and several other medical conditions.

This herb can play an important role in treating Psoriasis because of its anti-inflammatory and lipid-lowering actions. The herb has effective Vata- and Kapha-pacifying abilities and can help remove fat and excess fluids from the body. The herb is also capable of deep penetration into the tissues.

In Ayurveda, Neem is considered an excellent antiseptic, blood purifier, and detoxifier. It can effectively treat Psoriasis because of its capability to strengthen the immune system, destroy fungus and bacteria, and manage several skin conditions like itching and redness of the skin.

The herb has proven beneficial properties in alleviating the pain and the itchiness experienced by Psoriasis. The herb can also reduce the inflammation of the skin.

This herb is a remarkable blood purifier that can provide protection against Psoriasis. Chewing a few cloves of garlic every morning on an empty stomach can eliminate toxins from the blood and improve skin disorders. .

The flowers of Jasmine can have a favorable effect in treating Psoriasis. The use of the herb can reduce the pain, inflammation, and itching which Psoriasis patients undergo.