The term Atrophy refers to wasting away of cell components or tissues ultimately deteriorating the affected part of the body decreasing its functions. Multiple System Atrophy, therefore as it may clearly imply is the condition that involves atrophy of multiple systems of the body. Basically, it is a progressive neurological condition that involves atrophy of the cerebellum, brainstem, and basal ganglia which play an essential role in the regulation of internal autonomic functions of the body; thereby affecting body’s involuntary (autonomic) functions, including blood pressure, breathing, bladder function and muscle control.

Impaired balance, movement difficulty, muscle rigidity, poor coordination, bladder dysfunction, sleep disturbances, and poor blood pressure control are the characteristic symptoms of the disorder which are more or less like other neurological conditions like parkinsonism’s . However, patients with MSA typically show symptom onset at a younger age, with the average onset in the early 50s in contrast to patients with Parkinsonism’s. It is imperative to understand that patients with this condition can never be cured completely, only symptoms be improved as this rare disorder slowly eats away the neurological control. Therefore, medications and lifestyle changes are helpful in the management but cannot revert the condition back to normal.

The disorder which was first known as Shy-Drager Syndrome is believed to be a “sporadic,” implying that there are no genetic or environmental factors identified that cause the disease, the exact cause is still unknown. The probability of genetic inheritance is also very rare.
However, identification of a protein called alpha-synuclein in the cells that support neural cells and more specifically in ‘oligodendroglia’, a cell which forms a coating on nerve cells to enable them to speedily conduct electrical signals is a distinguishing feature of MSA. Studies show the possibility of α-syn causing disruption in the support and maintenance of the neurons &altered neurotrophic factor levels

The initial clinical symptoms are lightheadedness, dizziness, and episodes of passing out when the patient sit up or stand up – a condition c termed as a postural neurogenic orthostatic hypotension (NOH), a kind of low blood condition.

The other general characteristics symptoms are

MSA in Contrast to Parkinsonism

There is no specific test to diagnose Multiple System Atrophy (MSA), however, doctors rely on a combination of symptom history, physical examination, and laboratory tests to evaluate the motor system, coordination, and autonomic function to arrive at a probable diagnosis.

Managing symptoms of Multiple System Atrophy (MSA) is the only way out to improve the condition of patients so as to allow them to carry out day-to-day activities. According to Ayurveda, this condition involves an imbalance of the ‘Vata’ energy of the body. The deranged ‘Vata’ energy cause slow and progressive damage to most parts of the sufferer’s body. Therefore, herbal formulations prepared from pure and natural herbs can effectively help to balance the body and improve the condition in many positive ways. 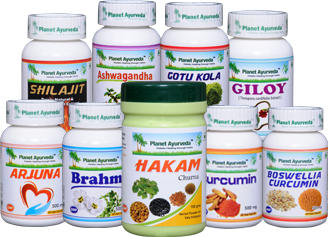 Ingredient: Prepared from pure and natural extracts of the ‘Haridra’ herb (Curcuma Longa), a herb commonly known as turmeric or haldi.

Recommended Dosage: It is recommended to take 3-5gm with hot water two times a day.

Planet Ayurveda has formulated with pure purified and natural extracts of Shilajit which makes it beneficial in rejuvenating brain cells, increasing metabolism and cell regeneration.

Ayurvedic formulations can be extremely beneficial for Multiple System Atrophy (MSA) patients in coping with their degenerative condition, and also in the prevention of some possible complications like breathing abnormalities while sleeping, breakdown of skin due to progressive immobility, injuries from falls resulting from poor balance, difficulty in swallowing, and vocal cord paralysis.