Giardiasis is an infection of the small intestine by a parasite called Giardia Lamblia. Parasites are the organisms that live on other organisms, which is a major problem in tropical and subtropical areas. Common parasites in the United States are- Trichomoniasis, Toxoplasmosis, Giardiasis. Different parastites show different symptoms such as Trichomoniasis is a sexually transmitted infection causes redness, itching. Toxoplasmosis is flu-like which causes swollen nodes, muscle pain. Anyone can get parasite infection but some people are at high risk such as low immunity, lack of clean water, and living in tropical or subtropical areas. Toxoplasmosis is a very harmful infection for pregnant women and their developing babies. Parasitic infections can be caused by 3 organisms such as protozoa (single cell organisms), Helminths (multi celled organisms), ectoparasites (multi celled organisms). In this topic we are going to study about its causes, symptoms and its ayurvedic aspect in detail.

Giardiasis is a parasitic infection marked by Stomach cramps, bloating, and watery diarrhea. It is the most common water borne disease found in swimming pools, wells, lakes. Giardia can spread through food, person to person. Giardia is a microscopic parasite which affects humans, dogs, and cats. It is the most common parasitic human disease known as beaver fever. Giardiasis spreads when the giardia cysts are within feces contaminated in food which is consumed orally. It can be improved by proper hygiene. This disease can be spread among animals and humans, the cysts usually survive for nearly three months in cold water. Can be easily diagnosed by stool tests. This infection can make a person lactose intolerant, the infection rate is high 7% in developed countries and 30% in developing countries.

They commonly live in the intestines of people and animals. They are passed in the stools which are encased in the hard shells called cysts which allow survival outside intestines. This whole is occurring due to

In ayurveda giardiasis is co related with krimirogas, is very common in children which mainly occur as intestinal infection. They easily breed up in the human intestine with the help of food and blood. Due to causative factors Kapha dosha and pitta dosha get aggravated and form different types of krimi at various places of the body. There are various krimi on the basis of their origin such as kaphaja krimi, raktaj krimi, pureeshaj krimi. The main factors responsible for krimi are ingest of food during indigestion state, milk, excess use of madhur and amla ras so acharya described 20 types of krimi-

This usually occurs due to the production of ama by consuming a sweet and sour diet.

According to effects on body

According to source of origin

Extraction of krimi by following methods

This chikitsa involves taking care of the causative factors by avoiding viruddha ahara, maintaining the hygienic condition, this therapy is the preventive approach rather than treating.

Neem (Azadirachta indica) is widely used herb for worm infestations, antimicrobial and treats many skin disorders. The extract of this plant has anti-inflammatory properties and has a protective effect on neurons. It is very light to digest, and tikta (bitter) taste, impacts cooling effect on the body, improves the digestion process and relieves tiredness.

Vacha (Acorus calamus) has scraping quality and useful in obesity, piles, and has a pungent (katu) bitter (tikta) taste. It balances kapha and vata dosha. Vacha is a useful herb in the treatment of improving epilepsy, schizophrenia, and relieves gaseous distention of the abdomen. It induces uterine contractions and is administered in dysmenorrhea.

Planet ayurveda is an ayurvedic clinic which provides great results to the patients. All the formulations made are under the strict guidance of ayurvedic practitioners. These medicines are free from any kind of colors, resins, and synthetic material. They are 100% pure and vegetarian extracted from plants. For the treatment of giardiasis planet ayurveda described the following herbal remedies which provides great relief to patients without any side effects.

Digestion support are poly herbal capsules formulated by planet ayurveda using ingredients such as- Amla (Emblica officinalis), Sounf (Foeniculum vulgare), Jeerak (Cyminum cuminum) and many more. These capsules help to maintain natural pH balance in the stomach, control acidity, gas, and flatulence. This capsule contains jeerak so it is helpful in improving appetite. Digestion support capsules contain pippali so it stimulates the liver, intestines to decorate the digestive juice.

Vidangadi loha are herbal tablets formulated by planet ayurveda using ingredients such as Shudh Gandhak (Sulphur), Pippali (Piper longum), Sonth (Zingiber officinale) and many more. It balances pitta and rakta dosha. Useful in diseases like inflammatory disease, helminthiasis, gastroenteritis, anorexia. These tablets are beneficial in abdominal colic pain, headache, worms infestation. Usually this medicine is used for deworming the intestines as it has a laxative property so it eases the dead worms out of the intestines.

Krimi Mukti capsule are poly herbal capsules formulated by planet ayurveda using ingredients like-  Afsanteen (Artemisia absinthium), Vidang (Embelia frondosa), Palaash (Butea frondosa) and many more. These capsules contain harad which balances tridosha and has rejuvenating properties. This capsule improves skin complexion, relieves digestion and helps in removing worms from intestines. Used as shiro virechana so helps in expelling out of doshas out of the body.

These are herbal tablets formulated by planet ayurveda using ingredients like Sea Salt, Black Salt, Tamarind bark and many more. It has various properties like analgesic, anti rheumatic. It helps to balance vata and pitta dosha, reducing intestinal pain, lessen the formation of gas. Mahashankh vati is useful in treatment of ulcerative colitis, piles, acidity, and malabsorption.

Giardiasis is an infection of the small intestine by a parasite called Giardia Lamblia. Parasites are the organisms that live on other organisms, which is a major problem in tropical and subtropical areas. Giardia is a microscopic parasite which affects humans, dogs, and cats. It is the most common parasitic human disease known as beaver fever. In ayurveda giardiasis is co related with krimirogas, Due to causative factors Kapha dosha and pitta dosha gets aggravated and form different types of krimi at various places of the body. Planet ayurveda provides remedies for the benefit of giardiasis which we discussed in this topic in detail.

Alternate to Tinidazole and metronidazole for Giardiasis

Giardiasis is a protozoal infection. This disease affects our intestines. There are billions of bacteria in our intestines which are helpful to digest and absorb nutrients. But infectious bacteria or organisms cause infection in our gut. Giardiasis infection is caused by flagellate giardia intestinalis called giardia lamblia. This disease is spread through people to others. In this disease a person is having diarrhea, vomiting, abdominal cramps, bloating, loss of appetite, lethargy, abdominal tenderness and distension. The treatment of choice in Allopathy is tinidazole and metronidazole. So in this article we are going to discuss tinidazole and metronidazole along with effective Ayurvedic medicines in detail. 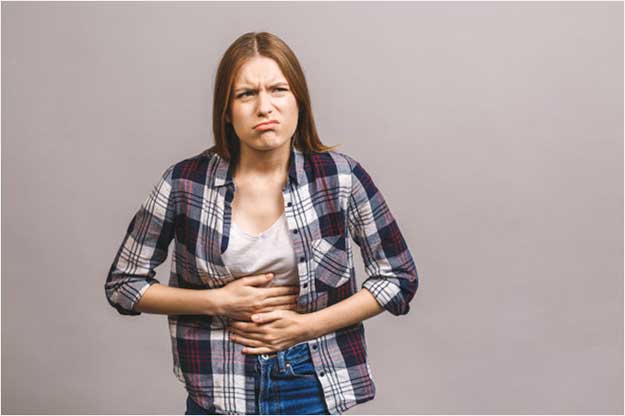 What is Tinidazole and Metronidazole?

These drugs come under the class of antiamoebic and antiprotozoal drugs. These drugs are useful in infection which is caused by a protozoa Entamoeba histolytica. These two drugs are the prototype of nitroimidazole which was introduced in 1959 for trichomoniasis. But later on it is found that it is a highly active amoebicide. Metronidazole and Tinidazole have broad-spectrum cidal activity against anaerobic protozoa. But they do not affect aerobic bacteria. They are selectively toxic to anaerobic and microaerophilic microorganisms. After entering into the bacterial cell by diffusion, the nitro radical of these drugs reduced the activity of the bacteria. This nitro radical exerts cytotoxicity (probably by damaging DNA). In addition metronidazole and tinidazole have been found to inhibit the cell mediated immunity which induce mutagenesis and thus further cause radio sensitization. These both drugs are used in intestinal as well as extra intestinal infections also.

Metronidazole and Tinidazole are almost completely absorbed from small intestines. Little unabsorbed drugs reach the colon. Metabolism occurs in the liver by oxidation and glucuronide conjugation. Plasma t1/2 of metronidazole is 8 hours.

It is contraindicated in the following

Uses of Metronidazole and Tinidazole

These are useful in

Difference between Metronidazole and Tinidazole

Tinidazole is mainly equally effective congener of metronidazole, but some little difference is there

Because of the adverse effects of these medicines, we are introducing some safe and herbal products for the treatment of giardiasis 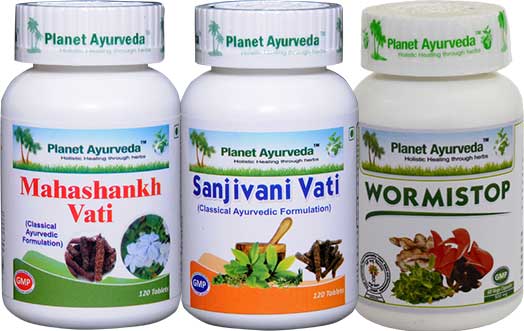 Dosage: 1 tablet twice a day after meals with plain water

This is also a classical ayurvedic medicine. This is a natural solution for abdominal pain, acidity and indigestion. This Ayurvedic formulation contains chitrak (Plumbago zeylanica), danti (Baliospermum montanum), sajjikshara (natural sodium carbonate) etc. this herbal product of planet ayurveda is best for digestive disorders such as indigestion, abdominal pain, disturbed bowel movement, loss of appetite etc. It has anti-inflammatory and anti-helminthic properties.

Dosage: 1 tablet twice a day after meals with plain water

These are poly herbal formulations of Planet Ayurveda. This formulation is helpful in managing infectious diseases like giardiasis. These capsules are made using the standardized extracts of palaash (Butea monosperma), tulsi (Ocimum sanctum), vidanga (Embelia ribes), sonth (Zingiber officinale). These ingredients are very effective for treating digestive problems. It is helpful in alleviating the digestive symptoms like indigestion, bloating, pain, excessive hunger etc.

Dosage: 1 capsule twice a day after meals with plain water