Common variable immune deficiency (CVID) is a disorder in which the body’s immune system is unable to defend against bacteria and viruses, especially in adults. This disorder is characterized by low levels of serum immunoglobulin (Ig) and lack of B lymphocytes ( cells responsible for producing antibodies)  due to which person becomes more susceptible to recurrent infections affecting the ears, sinuses, and respiratory tract (Lungs). Pneumonia is a common symptom of CVID.

Both humoral and cell-mediated lymphocytic responses are affected due to defective antibody formation in a patient of CVID. There is a problem in the T-cell ability to help B-cells and B-cells respond to T-cell help.

Although Common Variable Immune Deficiency (CVID) is mainly considered as a genetic disorder and the genetic mutations that lead to CVID have been identified, the exact cause of the disease is still unknown in most of the cases due to the heterogeneity of the disease.

Mutation in genes occurs in CVID which affects B Cells. These are specialized white blood cells that protect the human body from infections. Mutations in the genes lead to dysfunctional B cells which in turn are not able to make a sufficient amount of antibodies. 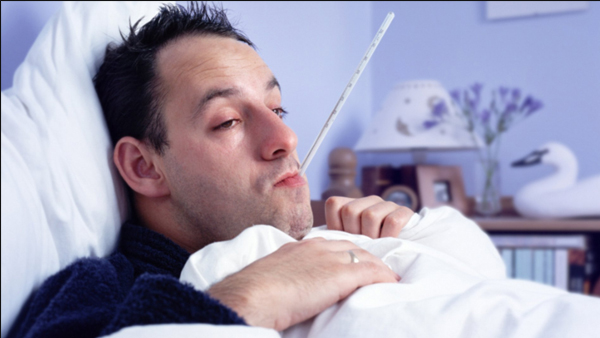 People mostly suffer from Pneumonia in CVID which in the future leads to chronic lung diseases (bronchiectasis). Chronic infection of the lungs (recurrent pneumonia) can lead to lung damage and many other complications.

CVID is considered the most common form of PIDD (primary immunodeficiency diseases) causing a low number of platelets or white cells, anemia, arthritis, and other endocrine disorders.

CVID can be associated with gastrointestinal problems like chronic diarrhea, weight loss, nausea, vomiting, and pain in the abdomen. People with CVID may develop granulomas in the lungs, lymph nodes liver, skin, or other organs. In some forms of CVID, patients are also at increased risk of lymphoid and gastrointestinal cancers

Diagnosis of CVID can be made through screening tests that measure immunoglobulin levels (IgG, IgA, and IgM) or the number of B cells in the blood. Decreased serum levels of IgG and IgA are the main criteria, there are low levels of IgM and dysfunction of T-lymphocyte.

Immune Globulin Replacement Therapy is the main line of treatment in which lifelong Ig (injection of human antibodies) is replenished that the patient is lacking. This therapy is used to prevent infections and treat bacterial infections involved with this disease.

Injections of Ig are given by both routes intravenous (3-12 % Ivy) and subcutaneous (10-20 % subcutaneous Ig (SGIg). Along with Ig replacement therapy (IRT) immunosuppressant, corticosteroids, and high doses of antibiotics are given to reduce the rate of acute and chronic infections.

There are many adverse effects of immunoglobulin therapy like

In modern science, the only treatment for CVID is IRT (Ig replacement therapy), which is a lifelong treatment and sometimes not very effective. The prolonged use of NSAID and CORTICOSTEROIDS can damage the liver cells and can depress the immune function.

Common Variable Immune Deficiency is a genetic disorder and according to Ayurveda, autoimmune diseases occur due to constant unhealthy lifestyle and diet. If someone is diagnosed with CVID and is suffering from its chronic and frustrating symptoms such as persistent pneumonia, arthritic pains, low energy levels, and mood disorders, these conditions can be healed and even reversed through a holistic combination of Ayurvedic diet, supplements and by practicing specialized techniques.

Many patients of chronic variable immune disorder (CVID) may lose hope of getting better due to long-lasting symptoms and complications. Ayurveda- our ancient and holistic science emphasis more on self –healing. It says that our body has a tremendous ability to heal, often more rapidly and completely. In Ayurveda, we treat the CVID by treating the root cause of the disease.

According to Ayurveda, the formation of toxins due to unhealthy lifestyle disturbs the functioning of the immune system. There are many herbs in Ayurveda which are used to detoxify the body like haritaki, shunthi, pippali, maricha, hing, and Saindhav lavan.

Along with detoxification Ayurvedic herbs also correct the metabolism (which is mainly affected in CVID) disorder due to Ama formation. Guggulu, Guduchi, Neem, Vasa, Patol Patra, and Ghrita are the main herbs used to increase metabolism.

IN Ayurveda Ojas is the main component needed for the nourishment of the immune system. The food we eat helps to build the Ojas. In CVID, the body’s immune system is weak, the Ojas is very low. There are many herbs like Haridra, Manjishtha, Guduchi, Amalaki, Nirgundi, Yashtimadhu and Pippali which are very useful to build Ojas in the body.

PLANET AYURVEDA provides many herbs and herbal remedies which are very useful to correct the immune system and thus increase the immunity of patient against diseases by increasing the OJUS. These herbs come under the category of RASAYNAS (immunomodulator or adaptogenic).  Rasayana therapy and Vajikaran therapy are considered to be very important for immune enhancement in Ayurvedic practice. In Ayurveda many types of Ojovardhaka Rasayanas and herbs are mentioned and their actions can be interpreted with modern aspects like Immunomodulatory action i.e. (prevention of recurrent infection and elimination of diseased cells).

Rasayanas also have adaptogenic action i.e. they maintain the balance between body and mind. Anti – Aging action of Rasayana also helps to improve the strength of the immune system by promoting the growth of healthy cells. The concept of increasing the OJAS and Bala by Rasayana therapy are antagonistic to increase the strength and immunity of the patient.

In Ayurveda, Charaka has described Bala as the factor that destroys the Doshas or disease-causing factors

Disease-causing agencies that invade the body.

In Ayurveda, the use of Rasayana Therapy is considered as Rejuvenation therapy. It is also mentioned in Ashtang Haridayam as

I.e. after panchakarma, Rejuvenation treatment ( Rasayan ) therapy should be taken up with suitable tonics and aphrodisiacs.

Planet Ayurveda provides Autoimmune Care Pack for the treatment of many symptoms related to CVID. These herbal remedies are 100 % pure, and vegetarian. These are free from side effects and are safe to use. 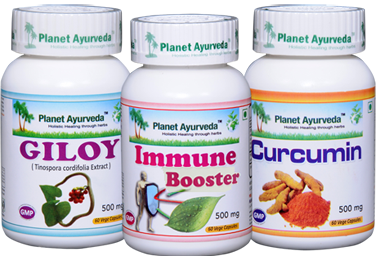 Giloy also called Guduchi. It is a magnificent herb, which is widely used in Ayurveda to boost immunity. Its scientific name is Tinospora cordifolia. In Charak Samhita Giloy is considered among rejuvenators (Rasayan Herbs). Giloy has diuretic properties which help in maintaining the pH of the body and flushes out the toxins. It also balances all the three doshas i.e. Vata, Pitta and Kapha.

Therapeutically Giloy capsules are used as antipyretic, anti-inflammatory, antiarthritic agents. Researchers have found its ability to reduce symptoms in autoimmune diseases. Various ailments of the digestive system such as hyperacidity, abdominal pain, symptoms of colitis, liver problems are treated with Giloy Capsules. Giloy is a very powerful herb and is used to increase immunity in CVID patients.

The various ingredients used in this formula are a Grapeseed (Vitis vinifera), Go-Piyush (Bovine colostrum), Bhumi amla (Phyllanthus niruri) and Amalaki (Emblica officinalis) that build immunity naturally. All these herbs have wonderful actions for enhancing immune power in CVID patients. All the ingredients of Immune Booster are very well known and are used worldwide. Grape seed extract is used to boost immunity in patients. Bovine Colostrum is a rich source of many vitamins like A, E, D, and natural immunoglobulin. Phyllanthus niruri is a powerful anti-oxidant and is very effective to fight against bacterial as well as viral – infections. Immune Booster Capsules enhance the immunity thereby reduces the chances of recurrent illness in CVID patients.

Planet Ayurveda’s Curcumin capsules are 100% pure organic products from the best quality Curcumin. These capsules contain a standardized extract of organically grown turmeric. Curcumin is also known as Turmeric which is a common household spice in India. The Curcumin capsules are completely natural and have numerous health benefits. Curcumin is widely used to treat the symptoms of many diseases such as liver disorders, chronic bacterial infections, allergies, cancer, and many autoimmune diseases. Curcumin possesses various antioxidant properties which are helpful to remove free radicals from the body and improves the overall health of the patient.