Shilajit finds a special mention in traditional Ayurvedic texts because of its capability to manage a number of diseases. Hence, it is one of the important ingredients in countless herbal formulations prepared by Ayurveda practitioners since centuries.

Although the list of health benefits of Shilajit is quite long, some of the main benefits resulting from the use of Shilajit have been discussed below:

The anti-aging benefits of Shilajit have been specifically mentioned in Ayurvedic texts. Shilajit has the capability to combat two main factors which lead to aging — the impact of free radicals and cellular damage in the body. Regular use of Shilajit on a daily basis can slow the aging process in some people.

The beneficial compounds present in Shilajit can notably enhance the functioning of the human brain. Highlighting the positive effect of Shilajit on brain power, some studies have noted that Shilajit can control, and even prevent, Alzheimer’s and other cognitive disorders.

Anaemia is a condition marked by a shortage of healthy cells or haemoglobin. The condition mainly results from a deficiency of iron in the body. Iron-deficiency Anaemia can lead to headache, fatigue, weakness, irregular heartbeat, and cold hands and feet. Shilajit can treat this condition because it is abundant in iron and humic acid. 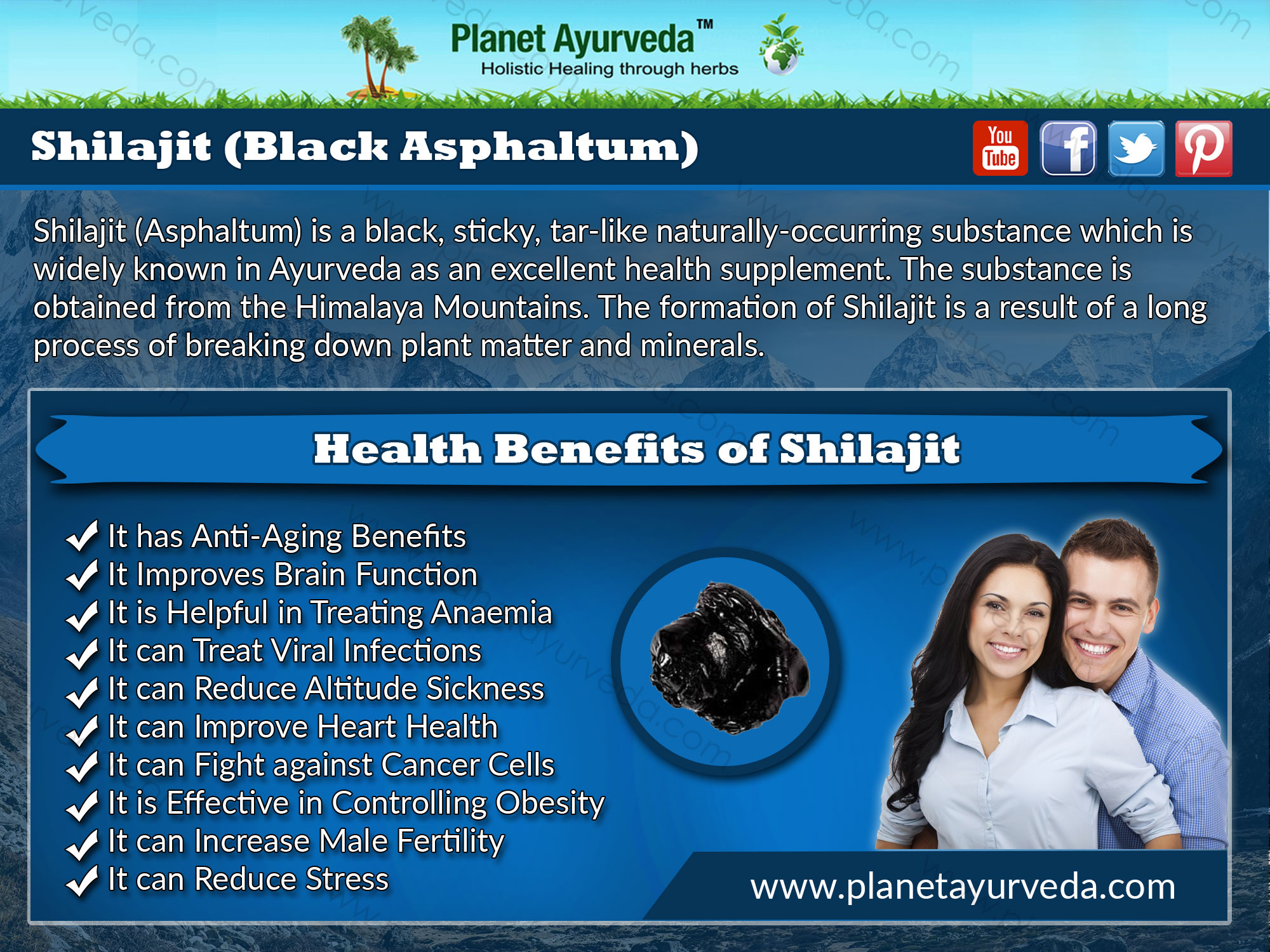 Shilajit’s anti-viral properties have been commended in Ayurvedic texts. The substance can fight off viruses because of the presence of numerous minerals and compounds. According to one specific research, Shilajit is capable of fighting and killing herpes viruses, as well as a number of other different viruses in isolated environments.

Shilajit has proven benefits in reducing altitude sickness, thereby providing relief to people who are affected by changes in pressure in high-altitude areas. Altitude sickness causes body pain, inflammation, fatigue, lung congestion, low immunity, and low cognitive ability. All these symptoms of altitude sickness can be effectively managed by the minerals and other beneficial components present in Shilajit.

The use of Shilajit has a proven beneficial effect on heart health. The antioxidant properties of Shilajit are believed to reduce potential cardiovascular damage and protect the heart. However, it is important to note that Shilajit may lower blood pressure in some cases; and, hence, it should not be taken by people who have an active heart condition.

7) Shilajit can Fight against Certain types of Cancer Cells

The use of Shilajit has been found to be effective in preventing and protecting the body from several kinds of cancers, including liver cancer, lung cancer, colon cancer, breast cancer, and ovarian cancer. Shilajit is a potential natural treatment for cancers because it contains a combination of heavy metals. Moreover, Shilajit’s cancer-cure benefits also include its ability to combat the damage which dangerous radiation may cause to certain systems of the body.

8) Shilajit is Effective in Controlling Obesity

Obesity, or excessive body weight, can put stress on the bones and exhaust the muscles. Obese people can supplement their exercise routine with a regular dose of Shilajit, to enable the body to respond better to exercise. The use of Shilajit can help the skeletal muscles to adapt to a workout quickly, thus resulting in less tiredness and increased strength of bones and muscles.

Since ancient times, Shilajit is known for its capability to boost testosterone levels in men, and increase their fertility. The use of Shilajit is beneficial for men facing fertility problems because it can increase total sperm count and facilitate the movement of the sperms towards the female egg.

Stress levels can be greatly used with the help of Shilajit supplement. Since Ayurvedic texts have classified Shilajit as a ‘Rasayan,’ it can significant reduce stress levels and the effects of stress on the body. It can improve the body’s defence mechanisms, and lower the stress levels by promoting mental and physical well-being.Along with the above-mentioned health benefits, Shilajit is also an excellent energy enhancer, memory enhancer, pain manager, and Nutritive tonic.

The recommended dosage of Shilajit for managing several health conditions is: 1-2 capsules, two times a day, with plain water or milk, after meals. 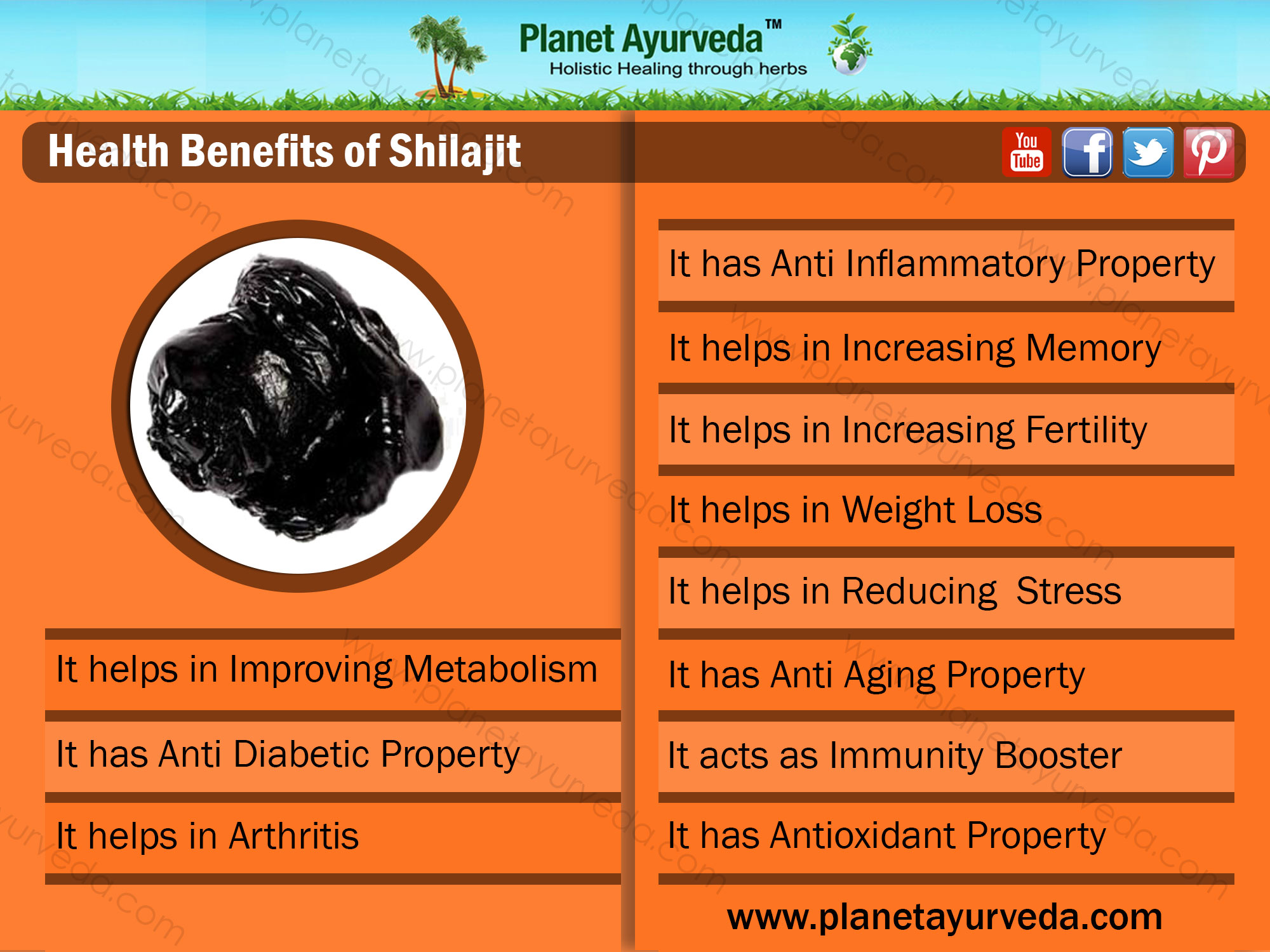