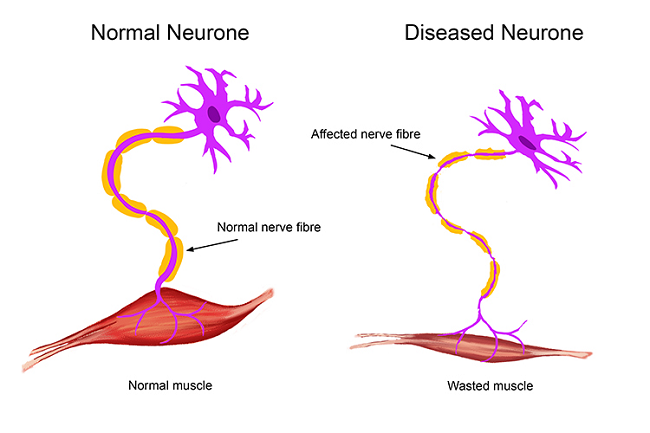 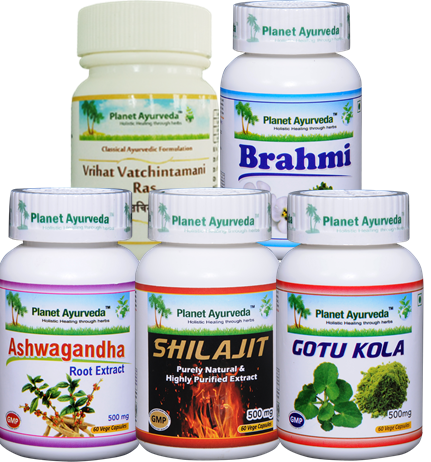 Motor Neuron Disease (MND) is an uncommon, progressive condition that affects the brain and the nerves. The disease is marked by the degeneration of motor neurons — that is, the nerve cells that control the movement of the muscles by transmitting signals from the brain. 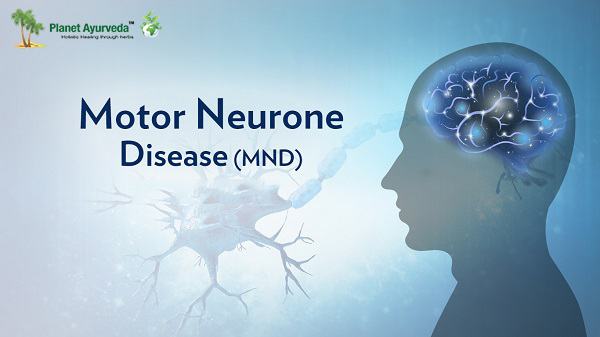 The term ‘Motor Neuron Disease’ (MND) broadly refers to a group of severe neurodegenerative conditions. In most patients, MND causes the degeneration of the upper and lower motor neurons, and adversely affects the functioning of the nerves in the spine and brain over a period of time. The motor neurons degenerate progressively and rapidly; thereby leading to weakness and wasting of muscles. As the condition progresses, patients start losing mobility in the limbs, and experience difficulties with speech, breathing, and swallowing. Eventually, the disease leads to respiratory failure.

MND is considered a fatal disease, though some patients can survive with the condition for several years. Once the symptoms of the disease become noticeable, doctors usually predict a life expectancy of 2-5 years for most patients. However, based on the rate of progression of the disease in individual patients, nearly 20% of the MND patients can live for up to 5-10 years after the disease is diagnosed.

According to research, the occurrence of MND is higher in people aged more than 50 years as compared to younger adults. Moreover, men are at a higher risk of developing the condition than women.

According to Ayurveda, diseases like MND are a result of Vata derangement. The Vata bio factor is responsible for functions of the central, autonomic, and peripheral nervous systems. Vata controls the brain’s cognitive and neurocognitive function, all kinds of body movements, as well as the respiratory, blood, lymphatic, excretory, and reproductive systems.

Motor Neurone Disease can be categorized into the following five types, depending on the affected motor neurons:

The exact cause of the occurrence of MND is not clearly known. Nonetheless, doctors believe that MND can either occur due to hereditary (inherited) factors or some sporadic/random factors.

In patients affected by MND due to hereditary factors, the condition is usually presented at birth. However, except for Spinal muscular atrophy (SMA), the symptoms of MND usually become noticeable only after 40 years of age. Nearly 10% of all MND cases are linked to hereditary factors.

With regard to random factors, experts are of the opinion that MND can occur due to viral, toxic, and other environmental factors. MND occurs randomly in almost 90% of cases.

The symptoms of MND follow a pattern that can be divided into three stages the initial stage, the advanced stage, and the end-stage.

At The Initial Stage

At The Advanced Stage

At The End Stage

There is no treatment for Motor Neurone Disease (MND). Doctors usually depend on various therapies and exercises for reducing the impact of progressive MND symptoms on the patient’s life.

MND symptoms can be managed with the help of alternative medicine. Planet Ayurveda offers some excellent herbal products which can be extremely beneficial for MND patients. These products are: 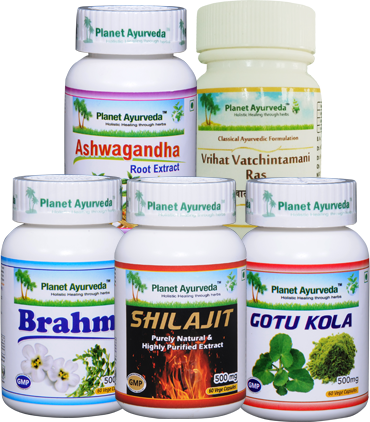 A standardized extract of ‘Brahmi’ herb (Bacopa Monneiri) is used for preparing these capsules. The herb is widely known for its therapeutic value and is considered an excellent health tonic, aphrodisiac and memory enhancer.

The preparation of these capsules involves a standardized extract of ‘Ashwagandha’ herb (Withania Somniferum). The potent herb is widely used in Ayurvedic formulations because of its anti-inflammatory properties.

For preparing these capsules, a standardized extract of the ‘Shilajit’ herb (Asphaltum) is used. The herb is considered an excellent adaptogen, restorative, rejuvenating and ‘Rasayana.’

The preparation of these capsules involves a standardized extract of ‘Gotu kola’ herb (Centella Asiatica). The herb is widely used in Ayurvedic formulations because of its ability to promote overall health.

Planet Ayurveda’s herbal products for managing MND symptoms are prepared from 100% pure and natural herbs. These products do not contain any chemicals, preservatives, artificial colors, binders or fillers. The products are safe to use, but should ideally be given to MND patients in consultation with an expert Ayurveda practitioner.

Q. Which is the most common type of Motor Neuron Disease (MND)?

A. The most common type of MND is Amyotrophic Lateral Sclerosis (ALS).

Q. What is a person’s lifetime risk of developing MND?

A. A person’s lifetime risk of developing MND is nearly 1 in 300.

Q. Do MND patients show the signs of Dementia at a later stage?

A. Yes. Around 15% MND patients show the signs of frontotemporal Dementia at a later stage.

Q. Why do MND patients find it difficult to keep their head upright as the disease progresses?

A. MND patients find it difficult to keep their head upright because of the weakening of the neck and shoulder muscles.

A. No. In most cases, MND does not affect intellect and memory.

Q. Does MND affect the senses of sight, smell, taste, touch, and hearing?

A. No. MND does not affect these senses of sight, smell, taste, touch and hearing.

Q. Does MND have a direct impact on bladder and bowel functions?

A: No. MND does not directly affect bladder and bowel functions at initial stage. However, bowel functions may get affected at a later stage due to immobility and dietary changes.

Q. How is the progression of MND generally measured for the patients?

A. The progression of MND is generally measured in terms of difficulties experienced by patients while carrying out their day-to-day activities.

Q. In which age-group is the highest incidence of MND usually recorded?

A. The highest incidence of MND is usually recorded in the 50-70 age-group.