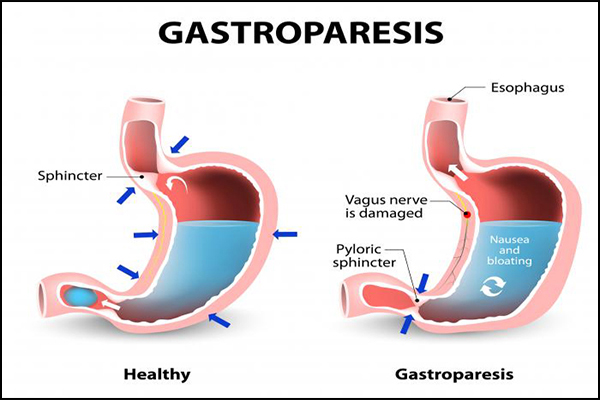 What are the Signs and Symptoms of Gastroparesis?

What are the Leading Causes of Gastroparesis?

Diabetes mellitus which is commonly known as “Madhumey” is considered to be the fundamental cause of gastroparesis. Type I diabetes and Type II diabetes damage the pacemaker cells located on stomach walls and vagus nerves, that circulates oxygen and helps our body to absorb essential nutrients. All over this slows down the digestion and causes fluctuations in blood glucose levels.

Hypothyroidism is also considered as an underactive thyroid, in which there is low production of thyroid hormones. Depletion in the quantity of thyroid hormones hinders secretory functions of the digestive tract. It affects the gastrointestinal system and motility, which is caused due to accumulation of mucinous material.

Scleroderma is an autoimmune skin disease that is characterized by fibrosis in skin. This causes the depleted blood supply to the nerves which stimulate the bowel movement. Hence, it weakens the gut muscles along with the esophagus and both the intestines.

Parkinson’s disease is an accelerating disorder that is caused by the degeneration of nerve cells that control body movements. This disease inhibits the movement and co-ordination between muscles in the affected person. It causes constipation or infrequent bowel movements which leads to vomiting, fullness, nausea, bloating, etc. and triggers symptoms of gastroparesis.

Gastroparesis can Cause Several Complications, such as:

According to the Ayurveda, gastroparesis can be treated effectively with natural herbs and some changes in the lifestyle which strengthens the stomach muscles. Gastroparesis or slow digestion is the result of an imbalance in Tridosha i.e. Kapha, Pitta and Vata. This disorder can be cured by three Ayurvedic therapies named Panchkarma, Rasayana, and Shodhna along with herbal remedies and improved diet. It is believed that Mandagni (weak digestion) is the core cause of all the ailments. Moreover, if the digestive system is not functioning smoothly, tends to result in improper assimilation and digestion of the food. Ayurvedic system of medicine provides long-lasting results with no side effects. medications.

Planet Ayurveda is a renowned herbal manufacturing organization producing effective blends that are 100% pure and vegetarian. These are fully safe to use and the preparation does not involve any chemicals agents, preservatives, artificial colors, additives or binders, etc. They are offering some tremendously beneficial herbal pack for gastroparesis which includes Digestion support capsules, Mahashank Vati, Chitrakadi Vati, and Digesto plan syrup. 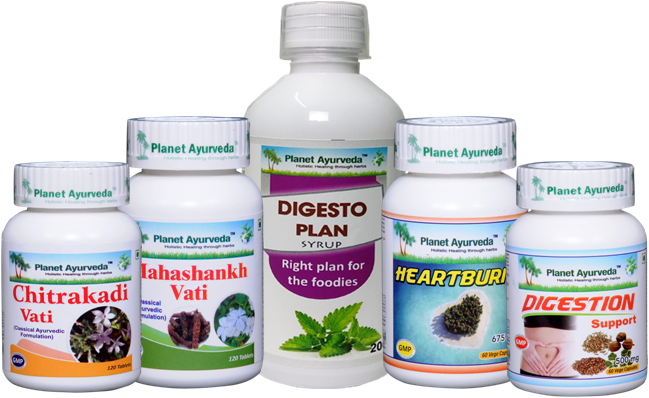 This is one of the useful medicinal plants containing potential therapeutic properties like cardiotonic, hepatoprotective and neuroprotective. It also comprises of two beneficial properties i.e. appetizer (Deepaniya) and digestive (Pachaniya) which tends to improve digestive disorders. Chitrak works miraculously in curing Aama dosha.

Ginger, which is known to pacify Vata and Kapha dosha, is also beneficial in relieving constipation and curing abdominal pain. This herb is a great appetizer and reduces symptoms of liver diseases, respiratory disorders, and cardiovascular diseases.

Black pepper, commonly known as “Kalimirch” (in Hindi), is a traditional Indian herb and a spice. This magical herb is beneficial in curing indigestion, increasing appetite and cleansing the intestine, improving digestive disorders.

Dosage- 1-2 capsules two or three times a day with plain water after meals.

digestive juices. It also has beneficial properties that relieve constipation and other digestive ailments.