As per the latest reports, liver diseases are emerging out to be the next major lifestyle disorder after hypertension and diabetes. In earlier times hepatitis B & hepatitis C served as the most common causes for liver diseases. But in the recent world, this is replaced by alcohol and other obesity related disorders. There is a surprisingly terrific rise of about 10 lakhs of new cirrhosis cases every year in India itself. Think. How huge the count will be, if we consider patients around the globe?

You will be wondered if you come to know about the fact that, hepato cellular carcinoma (liver cancer) is the second most common reason for the death due to malignancy in the world population. Some statistical studies show that liver cirrhosis will grab the 12th place for the leading cause of death in the world by 2020. Have you ever thought why there is an increase in demand for liver transplantation in the recent population?

Liver is a large organ found on the right side of the body, which helps to detoxify the chemicals & helps to metabolize the drugs. Proteins important for blood clotting are also generated by the liver.

Liver inflammations are usually regarded as hepatitis. It is classified as hepatitis A, hepatitis B & hepatitis C, based on the viruses causing the same. But it can also be sourced by other non infectious causes like drugs, allergic reactions, heavy drinking & obesity.

The dysfunctioning of liver caused by permanent scarring of the liver due to its long term damage is often termed as liver cirrhosis.

Hepato cellular carcinoma comes first among all types of liver cancer. It is often preceded by liver cirrhosis.

The ceasation of liver function is termed as liver failure. Genetic diseases, drug inducing, infection & alcohol often contribute to this.

Leakage of liver fluid to the belly causing distension & heaviness is called as Ascites. Cirrhosis is the main contributing factor.

Iron deposition in the liver is termed as hemochromatosis. This may even leads to multiple organ failure in later stages.

Permanent liver scarring in the biliary process, which causes its destruction, is known to be as primary biliary cirrhosis. This disorder is comparatively rare.

Inflammation & scarring of bile ducts in liver is termed as primary sclerosing cholangitis. This condition is also rare with an unknown etiology.

The common signs & symptoms of liver diseases include :-

Ayurveda gives liver an eminent place and considered it as the seat of metabolism. Liver is the base for pitta & raktha. Considering the fact that the country is battling with one of the major health concern, Planet Ayurveda put forwards some excellent herbal remedies to improve the liver functions.

Kalamegh (Andrographis Paniculata) ‘King of Bitters’ – which is indigenous to India, is used widely to treat infections. It is well known for its immune boosting powers. The anti inflammatory property of kalamegh is used in the treatment of PFIC. The fruits, flowers and leaves are all packed with the essentials to fight against diseases. It is best used in respiratory tract infections & liver cirrhosis.

Dosage :- 2 capsules twice or thrice a day after meals with lukewarm water. 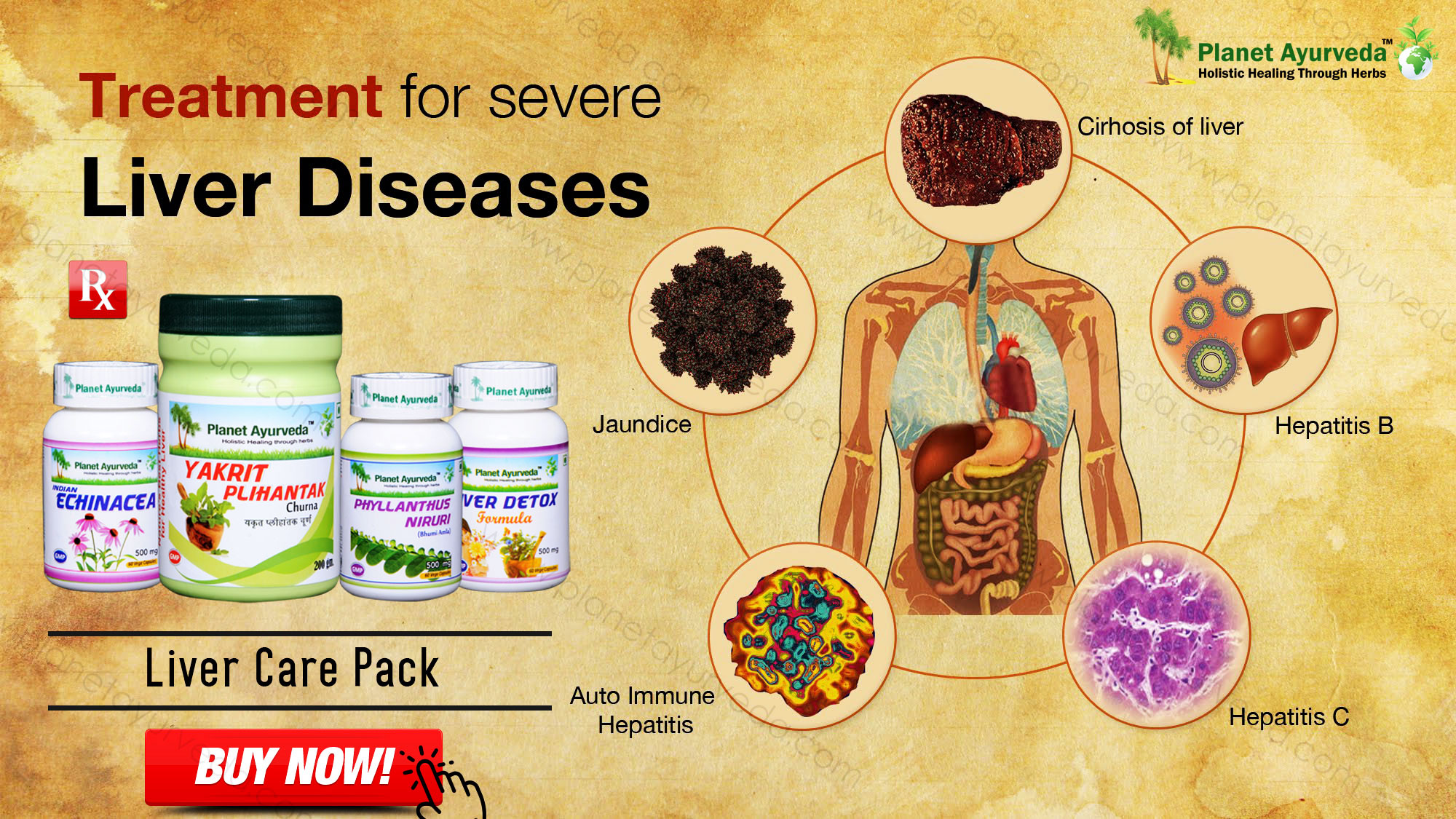 Dosage :- ½ to 1 tsp full twice a day, with lukewarm water or fruit juice after meals.

The potent liver cleanser, phyllanthus niruri tablets is manufactured out from the standardized herbal extracts of the herb, bhumi amalaki (phyllanthus niruri). The antioxidant property and the antimicrobial activity of the drug enhance the liver function. The proven statistical study on phyllanthus niruri shows decrease in insulin resistance and reduction of fatty liver symptoms. It is considered to be the best drug for enlarged liver.

Dosage :- 2 capsules twice a day after food with lukewarm water.

As the name indicates, liver detox formula helps in liver detoxification. It helps to boost the natural defense system of the body. An enhancement of liver function heals poor digestion, bloating, hormonal irregularities & fatigue, as there is an increase in bile secretion. Besides the therapeutic effect, it also has liver failure preventive action if taken daily. The major ingredients of liver detox formula includes

Dosage :- 1 to 2 capsules twice a day with lukewarm water either half hour before food or half hour after the food.

After years of research, it is proved that phyllanthus niruri has hepato protective property and it helps to clear out the hepatitis virus. Also andrographis paniculata is enriched with power to reduce the elevated SGOT & SGPT levels.

The live care pack can be taken by any liver patient to improve its function, after consulting with your doctor. Regular alcoholics can also have this to improve the overall health & immunity.