What is Honeycombing in the Lungs? (Pulmonary Fibrosis)-Causes and Treatment

The human respiratory system consists of a network of tissues or organs, lungs are the primary organs of the respiratory system. Lungs are the paired organ located on either side of the heart of human beings. The prime function of the lungs involves the gaseous exchange between the atmosphere and the bloodstream, basically, oxygen is extracted and transferred into the bloodstream and in turn releasing the carbon dioxide from the blood to the external environment. But due to increased air pollution and some other factors can lead to the degradation of the normal function of the lungs. One of such diseases is pulmonary fibrosis. In this article, we’ll discuss in brief the disease and its best Ayurvedic management.

Pulmonary fibrosis also known as honeycombing in lungs due to the radiological appearance of this disease and is defined as the condition which is characterised by presence of small cystic spaces with irregularly thickened walls composed of fibrous tissue in the lungs. Basically in pulmonary fibrosis, the tissue of lungs gets scarred, and lungs are unable to perform the normal functions efficiently. With increase in time, this condition gradually becomes worse and may ultimately lead to complete loss of function of lungs. Honeycomb cysts often predominate in the pleural/ sub pleural and peripheral regions of the lungs regardless of their cause.

The common clinical features of lung fibrosis include shortness of breath especially on exertion, chronic dry cough, weakness and fatigue, chest discomfort and pain in chest and back regions, loss of appetite is followed by rapid loss of weight On auscultation, sometimes the fine cracked during inspiration can be heard on the base of lungs.

PATHOPHYSIOLOGY OF PULMONARY FIBROSIS (Cause of honeycombing)

Due to the overexposure of endogenous and exogenous stimuli, leading to microscopic lung injury, separated spatially and temporally and if these injuries remain intact lead to lung haemostasis, and when healed up it leads to gradual change in lung parenchyma with fibrotic tissue leading pulmonary fibrosis, which appear as honeycombs on radiological imaging. This progressive changes in the normal lung tissue with scarred one, resulting in the reduced oxygen diffusion capacity and increase in stiffness of chest and back region. 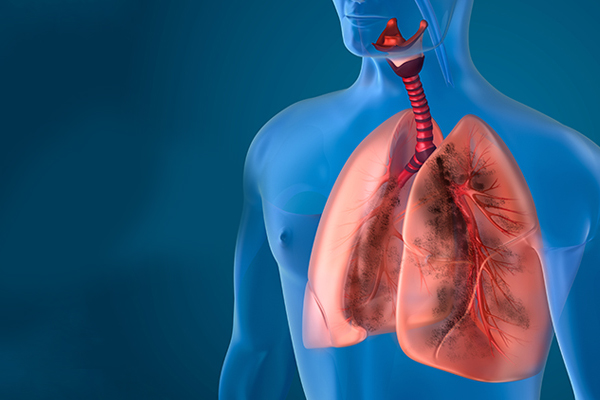 If proper management of this condition is not done it may lead to many several lifethreatining complications. These include pneumothorax, lung cancer, pulmonary hypertension and respiratory failure.

In Ayurveda, the best correlation of this disease can be made with Kshatksheen janya shwas rog, (respiratory disorder as a result of healed pulmonary abscess).

The person who is regularly on inappropriate diet and unwholesome diet, excessive dry and following the trauma to the lungs or due to any infective cause, the vitiated tridosha got entered in the chest region causing severe pain in the chest, back and also passes blood in sputum (hemoptysis), leading to abscess formation in the lungs and also causing depletion of shukra and oaj (the supreme body tissue that can be correlated with hormones responsible for growth and reproduction and immunity) and leading to the condition called kshatksheen. This kshat ksheen, itself when healed, makes the progressive changing of normal to fibrosed tissues in the lungs leading to pulmonary fibrosis condition.

The common symptoms of kshatksheen include

The bleeding when the tissue becomes fibrosed decreases but it leads to the gradual increase in breathing difficulty, exertional dyspnea and other such symptoms.

Planet Ayurveda Is The Best Emerging Manufacturing Hub Which Is Gradually Becoming The Global Distributor Of Herbal Formulations That Are Being Made On Ancient Ayurvedic Principles. The Products That Are Manufactured Here Are Under The Strict Supervision Of Our Expert Team Of Ayurvedic Doctors And Are Made With Ancient Time Tested Formulas.

Best Herbal Remedies as suggested by our experts for pulmonary fibrosis 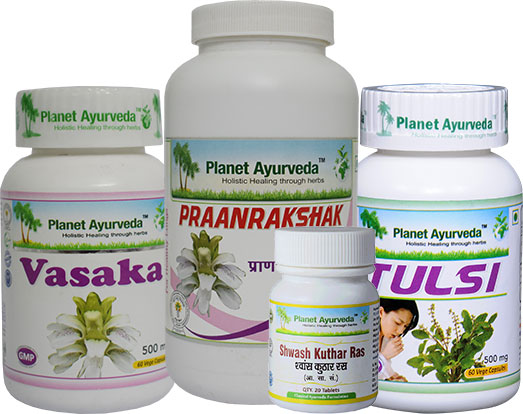 This is a poly herbal prepration made by Planet Ayurveda’s team on the ancient Ayurvedic principles. The shwas roga have prodominaece of kapha and vata dosha. This churna is very much efficient in screeching out the collected kapha dosha along with the soothing effects on the vata dosha. The product is having expectorant and properties to enhance the lung functions. The ingredients of this formulation include Sirisha (Albizia lebbeck), mulheti (Glycyrrhiza glabra) and kantakari (Solanum xanthocarpum) etc.

These are the standardized extract of the vasa (Adhatoda vasica). Vasa is an amazing rejuvenating herb that helps in the prevention of infections of lungs and promoting the health of the lungs, it helps in getting rid of the excess congestion in the chest and also improves digestion. This herb enhances the blood purifying ability, and boosts up the immunity. These all factors make them both suitable and one of the best medicines for pulmonary fibrosis.

Tulsi Capsules are made from the standardized extract of Ocimum sanctum. Tulsi is the best remedy to treat the respiratory difficulties used since ages. Moreover, tulsi is the abundant source of antioxidants such as eugenol that protects the lungs from free radicals. Due to its kapha shamak property, it aids in relieving the symptoms of pulmonary fibrosis.

The classical Ayurvedic formulation used for the shwas roga (respiratory ailments). This medicine is useful in chronic breathing difficulties and dyspnea on exertion along with the stiffness issues in the lungs. Shwas kuthar ras is the best herbomineral preparation for dissolving the fibrosed tissue (due to kapha) and helps in promoting the normal lung functions.

Dosage– 2 tablets twice daily after meals, for better results crush the tablets in half teaspoon of ginger juice, and consume it with 1 teaspoon of honey.

There is no treatment method available with the Allopathic medicine for this condition, they mostly focus on symptomatic treatment (pulmonary rehabilitation or oxygen therapy), whereas Ayurveda with an integrated approach of lifestyle and dietary modification along with the herbal formulations is the best way to manage the condition of  Pulmonary fibrosis.