Eosinophilic lung disease/ pulmonary eosinophilia is a condition in which basically there is the accumulation of eosinophils in the pulmonary pathway due to any of the associated conditions such as various infections, allergies, parasites, malignancies, autoimmune processes, obstructive lung diseases and various others. Lungs are considered as one of the most important organs for life as it supports our breathing. As each cell of the body needs an abundance of oxygen for living, that is only possible if our lungs work properly. The oxygen gets exchanged with the carbon dioxide present in the cells of the body which is the waste and can be eliminated with the help of lungs. So it is important to keep lungs healthy for maintaining overall health of the body. Let’s discuss further all the details of pulmonary eosinophilia and its ayurvedic management. 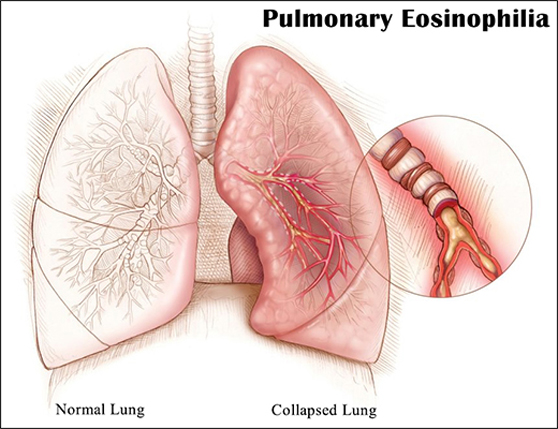 The causes of Pulmonary eosinophilia include various things depending upon the type. As it is generally divided into three types that are idiopathic which have unknown causes, the second one is secondary pulmonary eosinophilia which includes the causes such as certain drugs, parasites, allergies, etc. The last type is eosinophilic vasculitis in which inflammation of blood vessels occurs that prevents the blood flow which further causes the damage to the tissues and vital organs mainly occurs due to allergies and asthma.

Following are some of the common drugs and infections that can lead to Pulmonary Eosinophilia.

The following are the symptoms of Primary Eosinophilia

Beside the above Symptoms, Pulmonary Eosinophilia Consists of the Symptoms Mostly Associated with Respiratory Tract Issues.

Diagnosis of Pulmonary Eosinophilia includes a complete history with clinical evaluation and various laboratory tests. Also a physical examination is to be done which on rule out will come out with a wheezing sound in lungs. Various imaging techniques play an important role in ruling out pulmonary eosinophilia. Chest x – ray and CT scan is one of the most important tests to be done. Another test of bronchoalveolar lavage is needed for clearing the doubt in diagnosis. Blood tests are generally done to rule out the number of eosinophils and analysis of sputum is also important for evaluating the presence of any of the possible parasites.

Causes of vitiation of Pranavaha Srotas

Symptoms of vitiation of Pranavaha Srotas

Prolonged breathing, shortness of breath, difficult breathing, intermittent breathing, abnormal sounds during breathing, painful breathing. So for relieving the symptoms of pranavaha sroto dushti , Planet Ayurveda formulated a list of herbal remedies that we are going to discuss further.

Planet ayurveda is a clinic that helps you with getting rid of your problem in an ayurvedic way. All their remedies are formed under the guidance and supervision of M.D. ayurveda doctors and 100% purely vegetarian. Also while formulating their remedies they take care that any kind of added synthetic material should not be added to it like any sort of resins, fiber, color, preservatives and all. Now let us go through those herbal remedies that will ease your symptoms of Pulmonary eosinophilia.

Following are The List of Herbal Remedies by Planet Ayurveda that Helps in the Management of Pulmonary Eosinophilia: 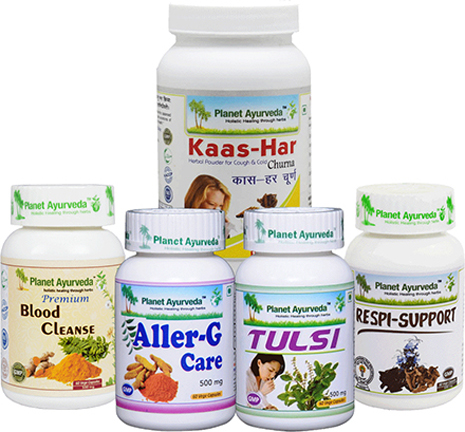 Aller-G Care by Planet Ayurveda is a herbal remedy in capsule form which consists of various standardized herbal extracts such as Haridra (Curcuma longa), neem (Azadirachta indica), shirish (Albizia lebbeck), and ashwagandha (Withania somnifera). These capsules help in alleviating the symptoms of pulmonary eosinophilia by eliminating any type of allergens from the body. It also prevents the growth of allergens in the body due to the presence of antioxidant properties.

Premium blood cleanse is a herbal remedy formulated by Planet Ayurveda in capsule form. These capsules consist of herbal extracts like haridra (Curcuma longa) and neem (Azadirachta indica). This formulation consists of the properties such as antioxidant, anti-inflammatory, blood purifier, antihelminthic, etc.     These capsules help in the detoxification of the blood as well as maintain the levels of blood components which aids in the formation of healthy and cleansed blood. So by cleansing of blood eosinophils get depleted and there is the alleviation of symptoms of Pulmonary Eosinophilia.

Tulsi capsules by Planet Ayurveda consist of the standardized extract of herb tulsi (Ocimum sanctum). Tulsi provides various health benefits especially for the respiratory system. It consists of anti-inflammatory, antimicrobial, anti-allergic and antitussive properties. It boosts up the immunity levels and prevents all types of infections thus restricting  Pulmonary eosinophilia. Tulsi is a very potent herb for lungs and helps in maintaining the overall health of the respiratory system.

Respi-Support is a very effective herbal remedy in a capsule form formulated by Planet Ayurveda. This herbal remedy includes the standardized extract of karchoor (Curcuma zedoaria), bharangi (Clerodendrum serratum), pippali (Piper longum) and two more herbs. All the herbs consist of hot potency which helps in reducing vata and kapha dosha so it is helpful in managing the symptoms of Pulmonary Eosinophilia. As the aggravation of kapha and vata dosha is responsible for the vitiation in the respiratory tract, this remedy is very helpful in Pulmonary Eosinophilia patients. Respi-support capsules mainly help in relieving the symptoms such as difficulty in breathing, prolonged breathing, shortness of breath and various other problems while breathing.

Kaas-Har Churna is available in powder form by Planet Ayurveda. The herbal powder consists of various lung supportive herbs such as vanshlochan (Bambusa arundinacea), Pippali (Piper longum), Ela (Elettaria cardamomum) and Dalchini (Cinnamomum zeylenica). This herbal formulation aids in reducing kapha dosha in the respiratory pathway and helps in relieving the major symptoms of pulmonary eosinophilia such as dry cough, wheezing, shortness of breath, rapid breathing and various others.

Eosinophilic lung disease / pulmonary eosinophilia is a condition in which basically there is the accumulation of eosinophils in the pulmonary pathway due to any of the associated conditions. The main causes of pulmonary eosinophilia are various infections, allergies, parasites, malignancies, autoimmune processes, obstructive lung diseases and various others. The main symptoms included Dry cough, Chest pain, Fever, Rash, General debility, Wheezing, Rapid breathing and Shortness of breath. Other symptoms depend upon the pathology of the disease. Patients who are suffering from pulmonary eosinophilia follow a healthy diet and lifestyle along with herbal remedies by planet ayurveda to get rid of this disease. All the remedies are 100% pure so feel free to consume these herbal remedies and get rid of your problem.

« What is Orchitis?- Symptoms Causes and its Ayurvedic management
Ayurvedic Prescpective Of Hereditary Motor Sensory Neuropathy(HMSN) »