Erosive Duodenitis is basically a digestive disorder that affects the beginning of the small intestine. The symptoms may be seen in the whole gastrointestinal tract and other related organs. Sometimes, it may be misdiagnosed as other digestive issues such as sever Gastritis, but it is different than that. The good thing is whether it is Gastritis or Erosive Duodenitis, Ayurveda has effective treatment for all the diseases. To know it more, we are here with almost all the relevant information about the disease along with its best alternative treatment.

What is Erosive Duodenitis?

Erosive means the cuts, when the word is added to any disease name; it indicates that the symptoms of disease will surely include the cuts. Because it affects the duodenum, the first part of the small intestine, therefore it is known as Duodenitis. Thus, Erosive Duodenitis is severe duodenum infection that includes inflammation and ulcers. The inflammation mainly occurs due to H.pylori bacteria. As we have mentioned above that it may be misdiagnosed as gastritis, so it is important to know their difference. The main difference between Gastritis and Duodenitis is the inflamed place. Inflammation of stomach lining called as Gastritis wherever inflammation of duodenum is Duodenitis. It can be acute and chronic. The acute Duodenitis appears suddenly and can be treated within a short period of time but the chronic Duodenitis progresses slowly and takes months or years to leave.

How is Erosive Duodenitis caused?

As already mentioned above, the major cause of Duodenitis is Helicobacter pylori (H.pylori) bacteria. The bacteria spread through contaminated food and can be transferred from one person to another. Other than this, there may be some secondary causes that are responsible for triggering the problem, these are:

What are the signs and symptoms of Erosive Duodenitis?

The most witnessed symptom of Duodenitis is inflammation of duodenum. Besides this, following can be present:

How can Erosive Duodenitis be diagnosed?

As, we have found that the major cause of Duodenitis is H.pylori bacteria, so the tests are usually done to detect the bacteria. It is done through blood, breath and stool tests. Moreover, upper endoscopy with biopsy may also be done to check inflammation, bleeding and other abnormalities.

Every disease is treatable after knowing its main cause. In case of erosive Duodenitis, the main cause is mostly known to the doctors and is any one of the already mentioned above. So, being a system of medicine that believes in eliminating the causes of a Disease along with the symptomatic treatment, Ayurveda has some effective natural herbs for its treatment. They do not have any adverse effects on the health, but it is always better to take any medicine with physician’s advice as the body constitution and medical conditions of the person varies.

What is the Best Treatment available for Erosive Duodenitis?

Being a leading manufacturer of herbal supplements and Ayurvedic clinic, owned by globally renowned Ayurveda expert, Planet Ayurveda is providing a combination of some most efficacious herbs for Erosive Duodenitis. These herbal supplements are helping the patients to get rid of the symptoms of Erosive Duodenitis as well as reducing the bad effects of H.pylori bacteria. Further provided are the complete details of each formulation in a well manner. 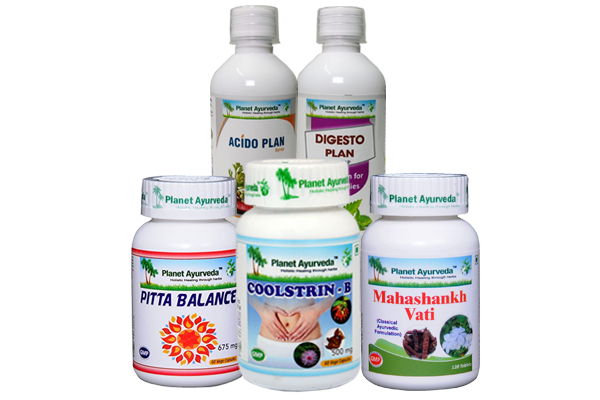 Mahashankh Vati is a classical herbal formulation that contains a blend of Shunthi (Zingiber officinale), Pippali (Piper longum), Shankha Bhasma (Ash of Conch shell), Tamarind (Tamarindus indica) bark, Shuddha Vatsanabha (Purified Aconitum ferox), Rock Salt, Black Salt and Sea Salt with supportive herbs. It is prepared as per the process mentioned in Bhaishajya Ratnavali, Agnimandya Rogaadhikaar. The formulation is an appetizer, digestive and possesses antipyretic, analgesic, anti-inflammatory and antiulcer properties. It helps to relieve bloating, and other symptoms of Duodenitis and other digestive disorders.

Dosage: 1-2 tablets twice a day with plain water, after the meals.

The major ingredients of Acido plan syrup are Patola (Trichosanthes dioica) and Sajjikshar (Soda-bi-carb) used with Saunf (Foeniculum vulgare), Ghrit Kumari (Aloe barbadensis), Kokum (Garcinia indica) and other useful ingredients. As the name mentions, it is good for acidity and indigestion and enhances the appetite too. Thus, it is a good supportive remedy in the treatment of Erosive Duodenitis.

The major function of this herbal blend is clear with its name only. It balances Pitta Dosha, which is mainly vitiated in the digestion related issues. It includes some cooling natural ingredients such as Coral Calcium (Praval Pishti), Agate Calcium (Akik Pishti), Pearl calcium (Mukta Pishti), Giloy (Tinospora cordifolia), etc. These herbs have cooling and soothing properties because of which they make Pitta balance and effective blend to be used in the situations of ulcers, burning sensations, bleeding, and many more. Thus, it is a good choice to be combined with other remedies for the treatment of Erosive Duodenitis. Pitta signifies Agni (Fire), this herbal formulation regulates the digestive fire.

Coolstrin-B is a herbal formulation manufactured to help the people have cooling effect in case of the vitiated Pitta Dosha (fire element). The inflammation, pain, burning sensation, and many more are the symptom of abnormal functioning of digestive fire. Coolstrin-B shows remarkable results in such conditions and supports to combat the digestive problems including Erosive Duodenitis. It contains extract of 5 potent herbs with similar actions, Nagkesar (Mesua fera), Mochrus (Salmalia malabarica), Lodhra (Symplocos racemosa), Dhataki (Woodfordia fruticosa), and Lajjalu (Mimosa pudica).

Thus, with all the above provided information, we can easily get to know if one has Erosive Duodenitis and the best medicines available to treat it through natural herbs. It is always recommended, not to ignore your health at anytime, sometimes even the mild symptoms can be the cause of a major disease. So, keep a check and stay healthy.

« Can Addison’s Disease be managed with Ayurvedic Remedies without Hormone Replacement Therapy?
How to Control Your Diabetes with Ayurvedic Treatment »