Liver is the heaviest internal organ of the body and is present in vertebrates only. It weighs around 1.2 to 1.5 kg and is located in the right upper quadrant of the abdomen. It also helps in detoxification and in various metabolic activities. It is a roughly triangular structure that consists of two lobes. One is the right lobe and another is the left lobe. Right lobe is slightly larger than the left lobe and is separated by falciform ligament. Liver is also connected to two large blood vessels, which are hepatic artery and portal vein. The hepatic artery carries blood from aorta to liver whereas portal vein carries blood containing digested nutrients. When due to these blood vessels a non- cancerous lump is made then this lump is called liver hemangioma. Some hemangioma occurs externally on skin and some occur internally like liver hemangioma. In this article we will be discussing liver hemangioma and also about the ayurvedic herbs that help in managing this condition.

Liver hemangioma can be understood as the tangled network of blood vessels in or on the surface of liver. The tumor thus formed is benign (non cancerous) and usually do not cause any symptoms. The tumor is small and generally measures less than 4 cm in diameter. In rare cases it can grow larger and hence apply pressure on the surrounding structure. If it grows larger it can cause pain on the liver site and also can cause symptoms like nausea associated with vomiting. Many people have only one hemangioma but in some cases people can have multiple hemangiomas on their liver at once.  In adults it usually does not cause any complications but can be dangerous if develops in infants.  In infants it commonly develops in first 6 months of life. Further let us discuss the causes, symptoms, diagnosis and management of this condition. 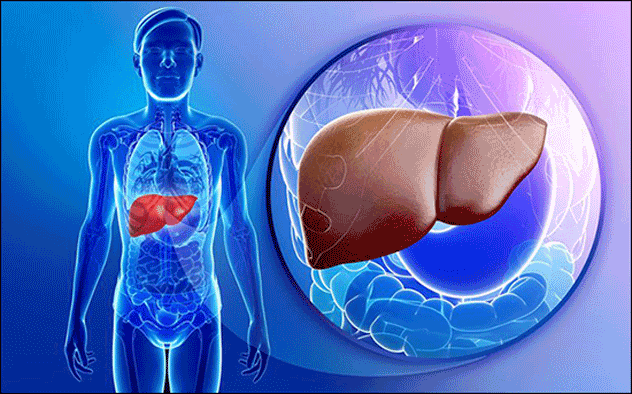 It is believed that this condition runs in families and is having its roots stuck to genes.  Even in some cases this condition can also be understood as birth defects. It is most common in pregnant females due to hormonal changes and also in menopausal females on estrogen therapies. In ayurveda, liver is called as yakrit and liver hemangioma is understood as yakrit asrigdar. Yakrit helps in agni chaya upchaya that is maintaining the digestive metabolism. This condition arises due to imbalance in agni or digestive fire. This imbalance results in the accumulation of toxins and hence gives rise to yakrit asrigdar.

Symptoms and signs or clinical features

In common, there is absence of symptoms. But if the size of tumor increases then following symptoms can be observed

In ayurveda acharya charaka mentioned asrigdara as rakta- pradoshja vikara and also as a complication of pittavrita apana vayu. Yakrit is called moola (root) of rakta vaha strotasa (channels of circulation). The strotasa carries dhatu (tissue elements and their constituents) that undergo transformation to their destination. This indicates that when the integrity of strotas is impaired both sthanagata and marga gata dhatu are involved and the vitiation spreads from one dhatu to another. This causes diseases of one particular strotas. Yakrit asrigdhara or liver hemangioma is believed to be vikara of rakta vaha strotasa.

Treatment of Liver Hemangioma in Ayurveda

If the condition does not depict any symptom, then, no treatment is generally required. But in case of symptoms there are chances that hemangioma is increasing and will cause problems in future. So for this in modern science either use of corticosteroids is prescribed or surgery is to be performed. If the conservative treatment fails only then the surgical option is to be considered. In surgical procedure hepatic artery ligation is done after the removal of hemangioma so as to cut off the blood supply to hemangioma.

Planet ayurveda is the leading herbal manufacturing unit that deals with production of best herbal products. These products are 100% pure and are totally vegetarian. The manufacturing is internationally certified and is done using standardized extracts of potential herbs. The products offered by planet ayurveda for liver hemangioma are:

This tablet is having amazing results in conditions like indigestion, acidity, pain in abdomen, nausea and vomiting. It also behaves as a deepana formulation, which increases your appetite. The formulation contains herbs like Pippali (Piper longum), Chitraka (Plumbago zeylanica), Danti (Baliospermum montanum) and some more.  These all herbs together help in pacifying the vitiated dhatus.

Dosage: One tablet twice a day with luke warm water after meals

Dosage: One tablet twice a day after meals with lukewarm water.

The livoplan syrup enhances the liver metabolism and also eliminates the toxins that cause harm to the liver. It helps in regeneration of liver cells.the decoction is made using potential herbs like Kalmegh (Andrographis paniculata), Bhumi amla (Phyllanthus niruri), Ghrit kumari (Aloe barbadensis), Kasni (Cichorium intybus) etc. These all herbs work potentially and protect the liver and its normal functioning.

The liver hemangioma is a rare disorder and is non cancerous. Although it can be troublesome when ignored for long or grows really fast. Such conditions are easily manageable if given attention on time. The medications offered by planet Ayurveda are best for the management of this condition as they cause no side effects and are easy to consume. Herbal medications have very good results in such conditions. In case of any query visit www.PlanetAyurveda.com