Passiflora: In the 15th century, Spanish missionaries in Peru coined the term Passiflora. He saw this unusual flower as a symbol of crucifixion– The Passion of Christ. Its five petals and 5 sepal arrangement give the appearance of 10 apostles of Jesus Christ (excluding Judas and Peter), five anthers represent the five sacred wounds of Jesus Christ, 3 stigma represent the 3 nails which held the Jesus on cross, tendril of flowers resemble the whips used in flagellation and the filament resembles the crown of the thorns. 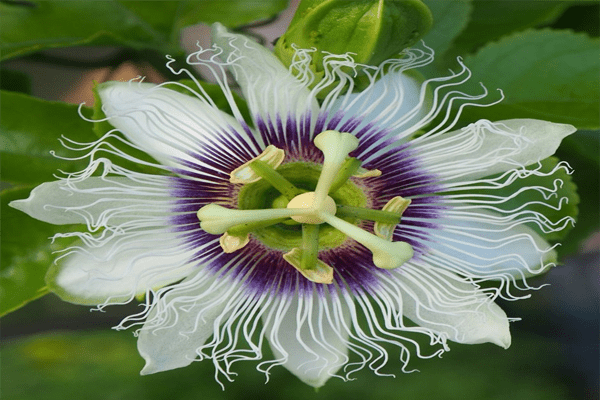 It is a perennial vine. The Stems are long, trailing, smooth or pubescent; possessing many tendrils. Its leaves may be 3-lobed or 5-lobed. Petals are bluish-white in color with white and purple corona. Flowers are self-sterile and are often pollinated by Bumblebees and Carpenter bees, fleshy fruit is an oval-yellowish berry, of the size of a hen egg having many seeds. The fruit has scanty pulp in it with a sweetly tart taste. Its color is green at first but it changes to yellow when it matures.  It is mainly found in thickets, near riverbanks, near unmowed pastures, roadsides, disturbed areas, and railroads, with lots of available sunlight. It is not found in shady areas.

It is easily cultivated and is native to the southeastern United States extending into the central portion of the US reaching Illino is Indiana and Ohio. The plants grow in well-drained sandy soil and in sunny areas. It can be planted all year in zone 7-11 (hardiness zone). The plant seeds in the spring season.

It is used to heal cuts and bruises. It is used as a powerful nervine tonic to treat stress and anxiety.It has also been used traditionally to provide relief to women who are experiencing menopause symptoms such as hot flashes and insomnia.

It is widely used in Ayurveda and alternative medicinal practices as a natural herb and it potentially resolves various health issues.

The Action of Passiflora on Our Body

Passiflora contains traces of indole alkaloids which include Harman as the main constituent along with Harmine and Harmaline constituents, tiny percentage of maltol and it also contains various flavonoids up to 2.5 percent.

It has following therapeutic benefits on the Central nervous system, Digestive system, and musculoskeletal system –

Passiflora as a Sedative

It is a good rest producing agent. It is useful in restlessness and to overcome wakefulness.  It is used in cases of insomnia occurring in infants and old people. It is useful in headache or sleeplessness that occurred due to overwork. It relieves the nervous system and provides peaceful and restful sleep to the patient and on the next day the patient awakens refreshed and quite.

Passiflora as an Antispasmodic Herb

It is very useful in the neuralgic type of pain. It has shown good results in relieving rectal pain, cardiac pain, spasmodic and neuralgic dysmenorrhea, facial neuralgia. It is also associated with or not associated with spasmodic action. It is also proved useful in many reflexes painful conditions incidents with menopause and pregnancy. It is also beneficial in nervous headache, cerebral fullness and also the headache of debility.

Use of Passiflora in Convulsions

It is proved to be very useful in convulsive disorders. It has shown very good results in treating tetanus, occurring in both man and horse.  In case if any warming sign of convulsion occurs to you, then, in this case, it is given in full doses as in this condition this remedy proves to be of considerable value, but once the attack has started then it is of no use. But it has shown good results in treating all stages of convulsions. It has shown good control in spasms occurring in childhood, irrespective of the reason, whether due to worms, due to dentition or due to any undigested ailment.  In1896, Dr. Holmes reported a case of post-partum puerperal eclampsia in which a patient had two convulsions before but by the hypodermatic use of two drachms of Passiflora (Passiflora Incarnata), the patient got relief. It has proved to be successful in hysteria with spasmodic movements along with whooping cough in association with convulsions.

It is available in Powder, Capsule and Liquid form –

Infusion – Take 1 Cup boiling water, then add 1 teaspoon of dried Plant. Leave it for 5-10 minutes to infuse then strain. Take One Cup at bedtime.

No side effects have been reported till now if used in therapeutic doses.

“The great thing about Ayurveda is that its treatments always yield side benefits, not side effects.”

« What are the symptoms, causes, diagnosis and best alternative treatment for Pancolitis?
Treatment of Thyroid Disease in Ayurveda »