Why Oil Pulling Is Best Way To Detoxify Your Body?

Oil pulling or kaval is in Ayurveda since 5000 years and has been stated about in various Ayurvedic literature like Charaka Samhita, Sushruta Samhita, ashtanga hradyam, bhavaprakasha and more.

ARE THERE ANY EVIDENCE OF OIL PULLING IN AYURVEDA?

It is stated in Charaka Samhita that keeping of oil in mouth strengthen jaw and voice. It helps in the development of the face and adds taste and relish in the food. Ayurveda says the person practicing this do not suffers from dryness of throat, lip cracks, and protects teeth from caries and strengthen them. So that they become able to chew the hardest items.

HOW IS AYURVEDIC TREATMENT DIFFERENT FROM CONVENTIONAL TREATMENT

As per Ayurveda, every individual is different from the other. So their diseased condition is also different whether it be the same disease. Even two people suffering from same disease condition can be in need of different treatment or different medicine. The treatment for one can be poison for the other.

Ayurvedic treatment is individualistic and holistic. So when treatment is done it is completely specific to that person treating the person as a whole.

WHAT HAPPENS DURING OIL PULLING OR KAVALA?

Kavala or oil pulling is the swishing of oil in the mouth. Oil should be warm, not hot. Swishing is done until tears develop in eyes and the nose runs. Here the liquefication of kapha is happening. According to Ayurveda kapha is a dosha. Amount of time will differ for this in every individual. There are definitive signs and symptoms are given in Ayurveda for proper treatment, under treatment, and overtreatment. Tears and running nose during oil pulling is the exact signs of proper treatment.

FOR WHAT OIL PULLING IS USED IN AYURVEDA?

In Ayurveda, Oil Pulling or Kavala is used for the expulsion of doshas known as shodana. Proper measures must be taken in order to then expel them. There are different oils that can be used but in general sesame oil is used.

WHAT TYPE OF SUBSTANCE TO BE USED FOR OIL PULLING?

According to Ayurveda substance that is bitter, acidic, sour and salty should be used.

CAN COCONUT OIL BE USED?

Coconut oil is sweet, heavy and cold which is opposite to the qualities stated in Ayurveda, i.e. bitter, acidic, sour and salty. So the results will not be same and can be opposite. Detoxification is done with a type of substance that is anabolic (constructive metabolism) in nature.

WHAT ARE THE DIETARY RESTRICTIONS TO BE FOLLOWED?

As per Ayurveda a person following the oil pulling should avoid taking heavy diet and should take light diet, i.e. laghu ahaar because heavy diet can cause a disturbance in digestion and it will be a contradiction to treatment.

WHY SESAME OIL SHOULD BE USED FOR OIL PULLING?

According to Ayurveda sesame oil has the quality called sukshma. It is heating whereas coconut oil is cold in potency.

WHAT ARE THE DIFFERENT TYPES OF OIL PULLING?

Oil pulling or kavala can be done in different types depending on the need of an individual. Types are listed below:

As Ayurveda believe the disease is due to doshas and these oil pulling are based on either palliating it, pacifying it, purifying or detoxing it or healing it. 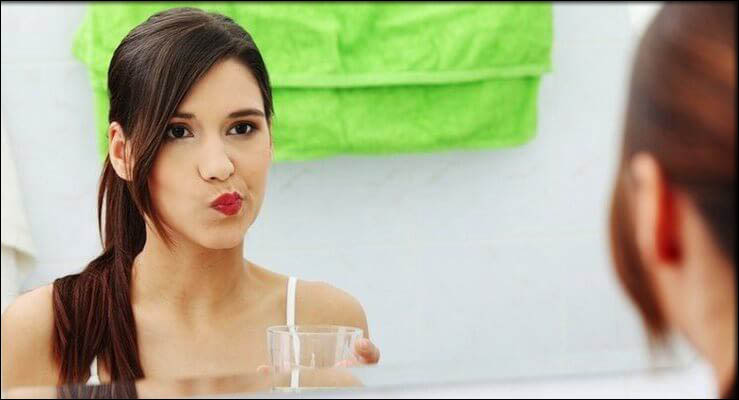 WHAT IS THE DIFFERENCE BETWEEN KAVAL AND GANDUSH?

Both are the type of mouth gargling. The only difference is that in gandush mouth is completely filled with oil and is not swished only held in the mouth for a particular time while in kavala oil is put into the mouth and then swished around for a specific time and then spit out.

WHAT ARE THE CONTRADICTION FOR OIL PULLING?

Oil pulling can cause a disease condition if used by a person in the following condition:

HOW TO KNOW IF TREATMENT IS ON RIGHT PATH?

If the treatment is on the correct line person will observe contentment, non-sliminess, lightness of mouth and clarity of senses.

And if the treatment is going on wrong path person will feel anorexia, loss of taste, dryness of mouth, thirst, and lassitude.

We at Planet Ayurveda offering a Nirgundi oil for oil pulling. It is obtained from leaves which are volatile and fragrant. It is usually prepared with sesame seed oil. It is an anthelmintic and anti-toxin. It is rich in vitamin c which makes it one of the best anti-inflammatory herb. It has pungent, bitter and astringent taste and hot potency, just as stated in the authentic Ayurvedic literature. It has anti-pyretic and anti-arthritic properties so that it helps to treat malaria, typhoid, worms, adenitis, and dermatose. It balances kapha and vata.

WHAT ARE THE INGREDIENTS OF NIRGUNDI OIL AVAILABLE AT PLANET AYURVEDA?

IN WHAT DOSAGE SHOULD IT BE USED?

Beginners should start with one teaspoonful and then gradually increase to one tablespoonful.

Start with 3-5 minutes and then gradually increase to 15-20 minutes.

« How To Manage Postural Orthostatic Tachycardia Syndrome (POTS) Naturally?
How to Get Rid of Adenomyosis with Natural Remedies ? »