How to Treat Ewing Sarcoma in Ayurveda ?

Ewing sarcoma is a small, malignant, round, blue cell tumor. It is a rare disease. It mostly grows in bones or soft tissues around the bones, such as nerves and the cartilages. Ewing sarcoma mostly affects long bones of legs and arms, but it may occur in any bone or soft tissues of arms, legs and abdomen. Long bones affected are femur, shinbone (tibia) and humerus. The pelvic bones are also affected. It can occur in any age group but is common in teenagers and young adults. Ewing sarcoma is common in white people and very rarely found in Asian Americans, Africans or Americans. 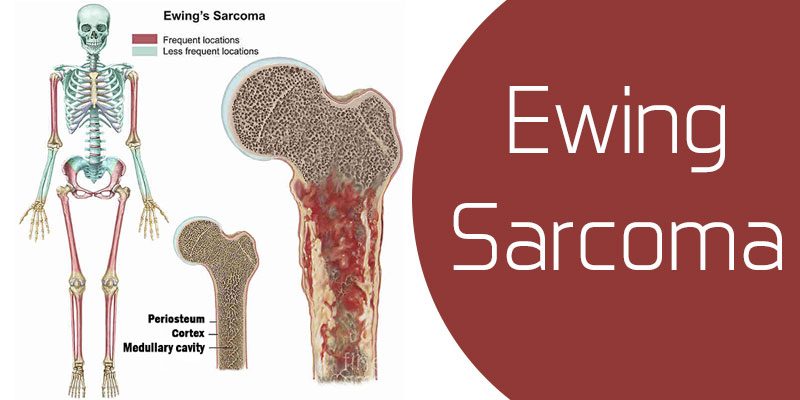 The tumor begins in the soft tissues and muscles is known as extraosseous Ewing’s sarcoma. It can spread to other body parts like lungs, bone marrow and other soft tissues.

According to the study the classification is made

It’s not inherited but occurs due to non – inherited changes in specific genes. Ewing sarcoma is due to the exchange of genetic material of chromosomes 11 and 12, which cause activation of overgrowth of cells.

Drugs are used to kill cancerous cells. It is the first line of cancer treatment. Before surgery go for chemotherapy as it shrinks the size of the tumor and makes it easy to remove.

Surgery is done to remove cancer cells and to maintain the functions and prevent disability. It removes a small piece or entire bone.

High energy beam is used such as x-ray, rays or protons to kills cancer cells. It is done after surgery to kill remaining cells. It also helps to relieve pain occurs in Ewing sarcoma.

It’s of two types or stages

According to Ayurveda, the tumor is formed due to Vata and Kapha doshas imbalance. Vata is responsible for its growth hence, vata pushes kapha dosha out of the balance resulting in tumor formation.

Diet to be Followed

Doctors say that physical labor is very important to avoid brain tumor. Exercise should be plenty. Some yoga is very beneficial with pranayama, the supply of oxygen to the brain is smooth.

Ashwagandha herb plays a vital role in stress-induced disorders including neurological disorders as it possesses a great anti-oxidant and anti-inflammatory properties. It helps to promote the overall well-being of the body and nourishes the brain to make the functioning of the brain quicker and sharper. Planet Ayurveda provides best of Ashwagandha benefits in Ashwagandha capsules. 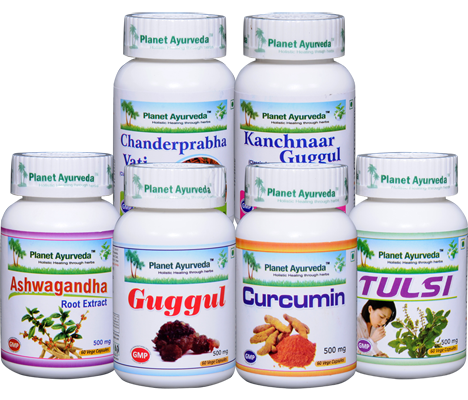 Because of rich medicinal properties, curcumin is a widely used the herb in case of cancer. Anti-oxidants present in the herb helps in reducing free radicals in the body. In many malignant cancers, curcumin is found to be very helpful.

Tulsi herb possesses strong anti-oxidant properties and it helps in removing free radicals from the body. This is a natural product obtained from pure Tulsi extract (Ocimum tenuiflorum).

Guggul Capsules of Planet Ayurveda is obtained from Guggul resins (Commiphora mukul). These capsules have anti-oxidant property and are useful in many health conditions. These capsules revitalize the cells and therefore rejuvenate them.

This tablet contains a mixture of different herbs like Shilajit (Asphaltum), Vacha (Acorus calamus), Haridra (Curcuma longa), Karpoor (Cinnamomum camphora), Amla (Emblica officinalis) etc. These tablets have a calming effect on the entire body. It is one of the most adaptogen and stress busters that cause relaxation.

Planet Ayurveda offers a wide range of herbal supplements that are 100% pure, herbal and are prepared through a series of effective and stringent tests to assure their quality. Early detection is believed to be the key factor in combating cancer effectively along with herbal remedies.